The Chinese social media veteran posted solid third-quarter results with a side of modest next-quarter sales guidance. The stock took an 18% dive on the news. Was that a fair market reaction?

Chinese social media operator Weibo ( WB -2.21% ) reported third-quarter results last week. The reported results were decent, but management set up a low revenue target for the next period. Investors didn't appreciate that combination, and Weibo's stock fell as much as 18% that day.

Weibo's third-quarter results by the numbers

Your average analyst had been expecting earnings near $0.73 per share on sales in the neighborhood of $468 million. Weibo hit one of these targets and exceeded the other by a 5% margin. Guidance for this quarter pointed to constant-currency sales growth in the vicinity of 7.5% year over year. On that basis, Weibo's sales rose by 6% and missed the midpoint of management's official target.

The company reported 497 million monthly active users, or MAUs. That's 2% above the second-quarter tally and an 11% increase over the year-ago period. Ninety-four percent of those MAUs accessed Weibo's services at least partly through mobile devices, comparable to the second-quarter ratio and up from 93% in the third quarter of 2018. Weibo appears to have found a stable proportion of mobile usage at this point.

Weibo reduced its total costs and expenses by 1% year over year, led by a 10% decrease in the cost of revenue. This decrease also included a 22% increase in the company's sales and marketing budget.

Looking ahead, Weibo's management expects fourth-quarter revenue to increase by approximately 1.5% on a currency-adjusted basis. That's approximately $489 million, a fair bit below the average analyst's projection of $496 million. In other words, the next quarter looks rough. (Editor's note: The analysts' projection has been corrected in this paragraph.) 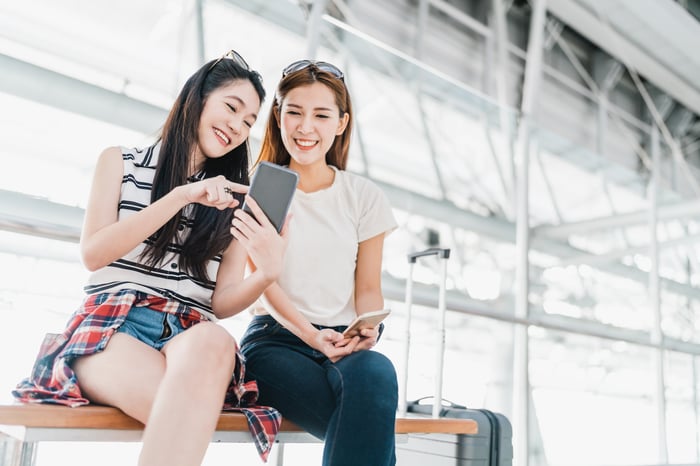 Two young Chinese girls sit together, pointing and smiling at their smartphones.

On the earnings call, CEO Gaofei Wang explained how Weibo doesn't focus exclusively on user growth anymore but also on increasing the engagement of existing users.

We increasingly leverage Weibo's advantage in trend discovery and social features to further acquire users and enhance user engagement. This strategy enables us to acquire users at a lower cost and meanwhile enhance user engagement against the market competition. [...] This year, we further emphasized on extending the life span of hot trend consumption and discussions to three initiatives. First, we optimized our topic products. Second, we enhanced distribution synergies among hot search topics and hot trend feeds. Third, in hot trend feeds, we further offered traffic support to promote original content and accounts around hot trends.

Wang claimed that these initiatives are increasing Weibo's leadership over other social networks in the area of discussing hot topics and newsworthy items. The number of discussions involving these hot topics rose by 67% in the third quarter, according to Wang.

CFO Fei Cao said the fourth-quarter outlook was set at a modest level because of short-term competitive pressures and the prevailing macroeconomic headwinds. The company will always face intense competition, but any improvement to the macro landscape could loosen the belts that are tightening among major online advertising clients right now.

Weibo's stock has now fallen 24% over the past 52 weeks, and you can buy shares at a fairly modest 17 times trailing earnings. The issues weighing on the stock appear to be temporary in nature. Patient investors might want to view Weibo's sudden drop as an opportunity to build a long-term position in the stock.