One of the big names in meat-free burgers right now is, of course, Beyond Meat (NASDAQ:BYND). Shares of the plant-based meat alternative producer soared more than 160% after its market debut in May, but the euphoria was short-lived. The stock has dropped 67% from its high this year as competition closes in to challenge Beyond Meat's hopes for a major share-price recovery.

For investors, that means that while shares of Beyond Meat may be in the doldrums, there's still profit to be found in the growing meat alternative market. And strangely enough, shares of meat producer Tyson Foods (NYSE:TSN) may be the way to go. 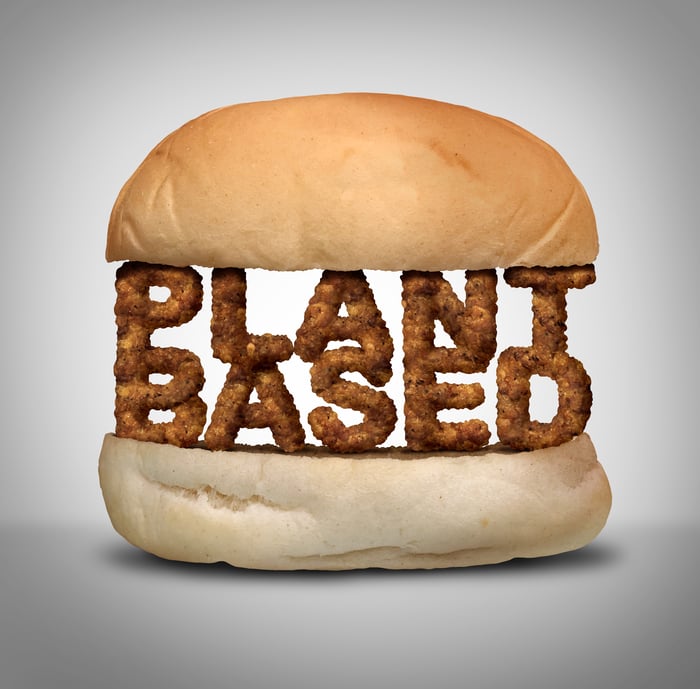 In June, management at Tyson announced its plant-based meat products, a product line named "Raised & Rooted." As an early investor in Beyond Meat with stakes in other alternative meat producers, Tyson isn't new to the plant-based game, but this marks its first solo venture into the market. In an interview earlier this year, Tyson chief executive officer Noel White expressed the company's move as a natural step, given the dynamic nature of the alternative meat market. Tyson hasn't specifically said why it sold shares in Beyond Meat or why it decided to enter the market on its own.

Tyson is known more for chicken than it is for veggie burgers, so why is this stock the best way to play the animal-free protein trend? The answers are size, stability, and diversification. These factors, along with the company's investment in the growing meat alternative market, may boost share performance. Although Tyson's fourth-quarter earnings last week missed analysts' estimates, the company posted positive earnings surprises in the previous three quarters. White said Tyson is "very optimistic" about the 2020 fiscal year, and the stock rose 7% after the earnings report.

With $40 billion in fiscal 2018 sales, Tyson boasts more than 100 facilities to process a range of products from chicken to prepared foods. In comparison, Beyond Meat focuses solely on meatless offerings, and the company opened a second production facility in Missouri last year. Management recently lifted its 2019 net revenue guidance to a minimum of $265 million from an earlier expectation of $240 million-plus. Although Beyond Meat's sales figures are strong and the company did increase its manufacturing capacity last year, Tyson still benefits from the size factor, boasting the financial and physical resources to quickly bring new products to market or address a shift in demand.

Share performance and valuation also make Tyson an attractive choice. While Beyond Meat shares have offered investors a wild ride this year, Tyson's menu has included steady gains. The stock is up 62% so far in 2019 to trade at about 16 times earnings. As a matter of fact, Tyson's shares have had a rather steady upward trajectory for a while, doubling over the past five years. Looking ahead, the shares have the potential to deliver for investors seeking a steady, long-term bet on the plant-based meat burger.

At the same time, Tyson is also a steady, long-term bet on meat, and that's a safety net investors might appreciate. Beef, chicken, and pork represent nearly 80% of Tyson's sales, so management is hedging its bets by entering the animal-free protein burger space.

Tyson doesn't specify how much of the business the plant-based initiative represents, but in its recent earnings conference call, White said the company had doubled retail distribution of its plant-based nuggets to more than 7,000 stores since the previous earnings report. "Alternative protein projections remain strong, and we're well-positioned to lead in this growing space," White added.

Plant-based burgers are here to stay

The plant-based meat market is set to grow by 28% a year, to $85 billion by 2030 from just about $5 billion last year. Competition for Tyson will come not just from smaller companies like Beyond Meat but from Perdue Foods, Nestle (OTC:NSRGY), Kellogg (NYSE:K), and other big food-industry players. While Tyson and Perdue compete in the chicken market, Nestle and Kellogg are not meat producers. One result of competition among these and other companies will be lowered prices on the finished products sold to consumers -- especially bad news for smaller players focused solely on plant-based meats.

The meat alternative market has a lot of potential, but the level of competition, the pressure on prices, and the risk associated with anything new make the terrain bumpy for all players. Tyson seems prepared as it moves into the fray. It's possible this company has as tasty a recipe for the plant-based meat market as it does for traditional protein.