When your faucet is leaking, you call the plumber. But when your retirement account starts leaking, it's time to rethink your savings strategy.

According to the Employee Benefit Research Institute (EBRI), retirement savers prematurely cashed out an estimated $92.4 billion from their 401(k) plans in 2015. We can't say exactly how the money was used, but it's probably not being saved for retirement anymore. This early withdrawal of 401(k) funds -- called leakage -- is a growing problem for would-be retirees. 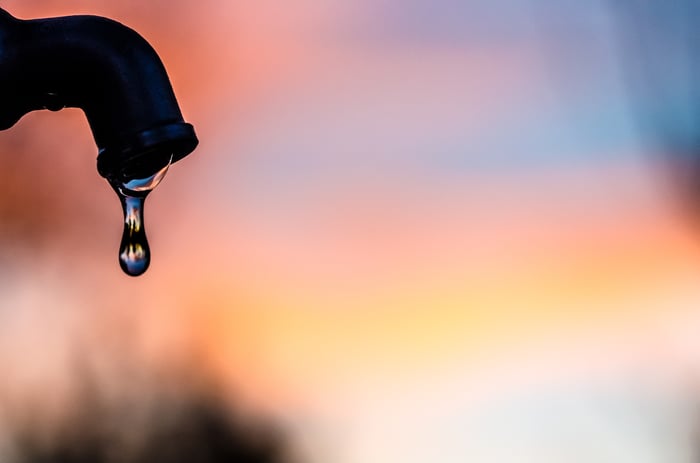 Workers can drain their 401(k) savings ahead of retirement in three ways:

Tapping your 401(k) might seem like a good idea when you're short on cash, but it definitely works against you in the long term. When you withdraw the money, you lose the benefit of tax-free compounded earnings. And if you spend that money, you're basically resetting your savings clock.

Say you contribute $100 monthly to your 401(k) for seven years, and you earn an average 7% annual return on that investment. Then you switch jobs and cash out your $11,025 balance instead of rolling it into an IRA. Now you have to pay a 10% tax penalty and save for another seven years to recoup those funds. And in the time you are rebuilding that balance, you're also missing out on the earnings you would have had if the funds were still invested.

You can see how the cash-out directly delays your retirement, but it may also affect everyone who's participating in that employer-sponsored plan. Fees for retirement plans are typically based on the total assets in that plan because smaller plans are more expensive to manage. As more and more workers remove their funds, the asset base gets smaller, which can drive up fees for everyone.

Beyond that, there's a cumulative effect on workforce trends too. Workers who don't have sufficient retirement savings must stay in their jobs longer, which in turn means fewer open job opportunities for younger people.

The simplest way to protect your 401(k) assets from leakage is to consider them off-limits. If you switch jobs, initiate a direct transfer of those funds to an IRA so the assets get moved electronically. You can also do an indirect rollover -- but you'll end up holding a check for your account value less some tax withholdings. If you think you'll be tempted to go shopping, avoid this scenario at all costs.

Failed rollovers are only part of the problem, though. 401(k) loans and hardship withdrawals also contribute to leakage. This underscores the importance of having an emergency fund so you don't have to tap your 401(k) when unexpected expenses arise.

In the short term, you should try looking elsewhere for cash. Downsize your house, trade in your car, sell some old stuff, ask if your employer offers emergency loans, or see if any relatives can float you some money temporarily. Those are hard decisions to make, for sure, but you'll be protecting your retirement in the long run. And if you absolutely must take money from your 401(k), pay it back as fast as you can.

Prevent the leak with an emergency fund

A leak in your 401(k) doesn't leave rust stains on the sink. But it could delay your retirement, contribute to higher plan fees, and slow job opportunities for younger workers. Prevent all of that by saving in your emergency fund now so you'll have options when financial surprises pop up.