In terms of individual stocks, Disney ( DIS -0.67% ) got a boost from the release of Frozen 2, and Walmart ( WMT 1.51% ) slumped as the retailer abandoned its New York City fresh grocery delivery business.

Disney's 2013 Frozen was a smash hit at the box office, generating $1.27 billion in ticket sales worldwide, according to Box Office Mojo. Six years later, Disney is finally ready to give fans a sequel. 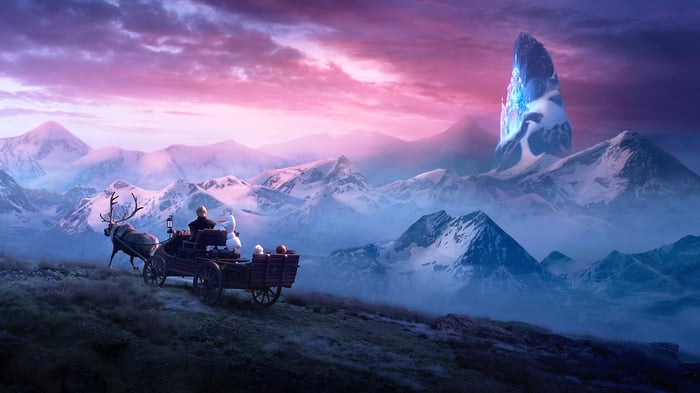 Disney's Frozen 2 debuted in theaters today, and estimates for the film are lofty. An opening weekend haul of a bit over $100 million is expected, and Frozen 2 will in all likelihood be another billion-dollar blockbuster for Disney. Frozen 2 will eventually be added to the Disney+ streaming service, but that's unlikely to happen until sometime next year.

Disney's movie business has been on fire this year, driven by Avengers: Endgame, Captain Marvel, Toy Story 4, Aladdin, and The Lion King. All five films surpassed $1 billion at the box office. In Disney's fiscal 2019, which ended in September, studio entertainment revenue jumped 11% to $11.1 billion.

With everything going right for Disney, the stock has unsurprisingly surged this year. Shares of Disney are up 35% year to date, with investors particularly excited about the Disney+ streaming service. Disney+ attracted 10 million users in its first day, with a low monthly price of $6.99 and a deep catalog of content ensuring its initial success.

Disney faces a few risks going into 2020. For one, topping 2019's box office performance will be a tall order. Second, Disney+ will be a drag on profits for years as the company builds up its content and its user base. And the initial surge of users might not lead to sustained subscriber gains if Disney fails to deliver enough new content.

Investors weren't concerned with the risks on Friday, handing the blue chip stock a 1.5% gain.

While Walmart has been successfully growing its online grocery business, with pickup and delivery from thousands of stores, the company's efforts in New York City have been a bust. Walmart began offering fresh grocery delivery in New York last year through its Jet subsidiary, but it just hasn't panned out.

Jet is ending its New York fresh-food delivery business, which targeted younger urban customers who are not traditionally Walmart customers. Prices were part of the problem: Jet was forced to raise prices to make the economics work. At one point, Jet was losing $20 per order, according to Bloomberg's sources. Jet plans to close a warehouse in the Bronx and eliminate between 200 and 300 jobs.

Shares of Walmart were down 0.2% on the news.

Jet was acquired for $3 billion in 2016, jump-starting Walmart's transformation into an e-commerce powerhouse. While Jet itself is struggling, Walmart is having no trouble growing its online sales. During the third quarter, Walmart's e-commerce sales soared 41% year over year.

It's unclear whether Jet has much of a future. Walmart started deemphasizing the brand earlier this year, and now the end of Jet's fresh grocery delivery looks like another nail in the coffin. Even though Walmart has failed to build up the Jet brand, the acquisition has fueled its e-commerce success. In the long run, that's what matters.