Enanta Pharmaceuticals' (NASDAQ:ENTA) got off to a great start in 2019 with its shares soaring more than 40%. It's been downhill since the first quarter, though. The pharma stock is now down more than 10% year to date.

Any hopes that Enanta's fiscal 2019 fourth-quarter results would help turn things around were dashed on Thursday when the company provided its Q4 update after the market closed. Here are the highlights from the drugmaker's latest quarterly results. 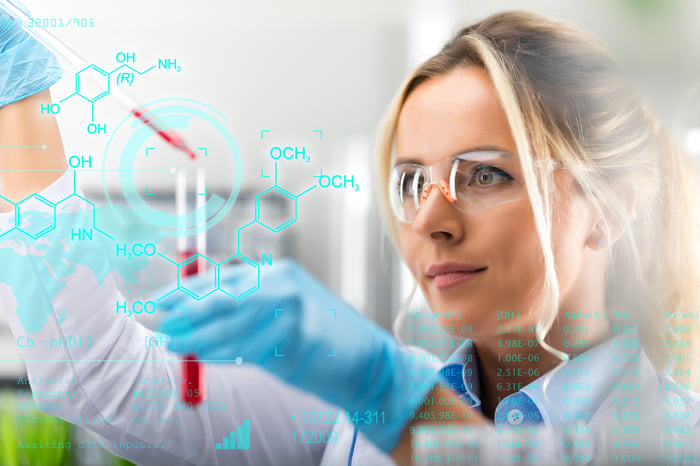 Enanta reported Q4 revenue of $51.3 million, a 24% decline from the prior-year period. Analysts were expecting that fourth-quarter revenue would be close to $55.9 million.

The company announced net income of $9.2 million, or $0.44 per share, based on generally accepted accounting principles (GAAP). This compared to earnings of $27.4 million, or $1.30 per share, in the same period in 2018. Wall Street analysts estimated that Enanta would post earnings of $0.53 per share in the quarter.

Enanta's cash, cash equivalents, and short-term investments totaled $400 million as of Sept. 30, 2019. This was an increase from the $325 million on hand at the end of the company's fiscal 2018 fourth quarter.

Enanta made practically all of its revenue from royalties paid by AbbVie (NYSE:ABBV) on sales of hepatitis C virus (HCV) drug Mavyret. This royalty revenue was higher in the fourth quarter of 2019 than in the prior-year period. However, Enanta's total revenue fell because the company received a milestone payment of $15 million from AbbVie in the fourth quarter of 2018 and didn't have any milestone payments in the recent quarter.

AbbVie stated in its third-quarter conference call that its global HCV revenue slipped from the prior-year period due to lower patient volumes and increased competition in the U.S. managed-Medicaid business. Enanta is basically a bystander as AbbVie slugs it out in the HCV market with Gilead Sciences.

Enanta's bottom line deteriorated mainly as a result of its falling revenue. The company's operating expenses also increased by 37% year over year, to $44.9 million, as the company spent more on its pipeline programs and increased staffing. Its net income was helped, though, by an income tax benefit of $0.5 million. In the prior-year period, the company recorded an income tax expense of $8.5 million.

The company projects that its research and development expenses in fiscal year 2020 will be between $155 million and $175 million, with general and administrative expenses between $27 million and $33 million. Both ranges reflect significant increases from fiscal 2019 spending.

Enanta expects that its cash position combined with royalty revenue will enable it to fund operations "for the foreseeable future." Even though sales for Mavyret have dropped, AbbVie CFO Robert Michael said in his company's quarterly update that the drug should "generate durable cash flow for AbbVie well into the next decade." That should translate to durable royalties for Enanta.

Pipeline progress is always critically important for pharmaceutical stocks, and Enanta is looking for several key pipeline developments in the near future. The company anticipates reporting data from its Intrepid phase 2 clinical study evaluating EDP-305 in treating primary biliary cholangitis (PBC) in the second quarter of 2020. Results from the first part of a phase 1 clinical study of EDP-514 in treating patients infected with the hepatitis B virus are expected in the first quarter of 2020.