Protests against the government have rocked Hong Kong since June, and violence in the streets has affected life there and beyond. As airlines canceled flights and demonstrations paralyzed shopping districts, it was clear that businesses would not be spared. Today, earnings reports from a wide variety of international companies are starting to show the battle scars.

First of all, a quick summary of exactly what is happening in this territory controlled by China. Protests began as a way to oppose a bill that would have allowed the extradition of people in Hong Kong who are wanted for crimes in mainland China. The bill was eventually dropped, but the movement continued, transforming into a call for greater democracy. 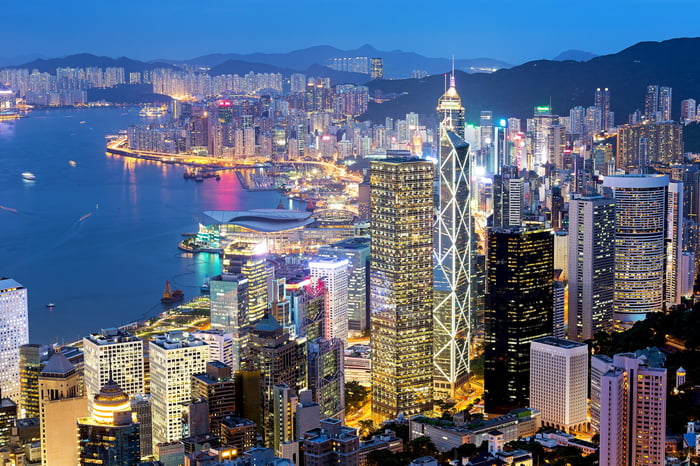 If you invest in luxury goods, hotels, airlines, or other companies with business in Hong Kong, chances are that the situation has affected their recent earnings, which can potentially weigh on share prices.

Here's a look at three companies that are caught in the crossfire.

The theme park operator's Disneyland Hong Kong has seen a "significant" decline in guests from China and other parts of Asia because of the protests, chief financial officer Christine McCarthy said on the company's fourth-quarter earnings call. Management expects operating income at the park to decline by $80 million for the first quarter, and if problems in Hong Kong continue, the annual decline may total $275 million year over year, according to McCarthy.

Clearly, the Hong Kong park is only one part of a large and multifaceted picture, meaning other parks and business segments may compensate for difficulties there. For instance, the company's parks, experiences, and products unit posted a 17% increase in operating income in the quarter, to $1.4 billion, and overall quarterly earnings surpassed estimates. Still, if disruption continues in Hong Kong, the problem may carve a larger and larger chunk out of Disney's earnings.

Swiss watch exports to Hong Kong declined by nearly 30% in October, according to The Federation of the Swiss Watch Industry, and Swatch's (OTC:SWGAY) position in the region means it is feeling the pressure. According to Statista, Swatch accounts for about 36% of revenue generated though sales of luxury watches in Hong Kong, giving it the biggest share of that market. The Swiss timepiece maker said in its first-half report in July that the situation in Hong Kong weighed on its business there, resulting in a double-digit drop in sales. While management didn't provide further details, it did describe Hong Kong as "an important sales market with attractive margins." Although Swatch said it expects positive overall annual growth, investors will want to watch how that growth fares if the turmoil in Hong Kong continues.

While many international companies can rely on unrelated divisions as they deal with losses from the problems in Hong Kong, the situation is more complicated for Hong Kong-based Cathay Pacific Airways (OTC:CPCAY), which with its subsidiaries operates 216 aircraft connecting the territory with 111 global destinations.

With declines in tourism, canceled flights, and protestors demonstrating at the Hong Kong International Airport, the airline recently called the near-term future "challenging and uncertain." As protests escalated in August, the airport, one of the world's busiest, grounded all flights, and airlines have since been forced to reduce service to and from Hong Kong as demand dropped. Cathay Pacific said it saw a 35% year-over-year decrease in demand for flights into Hong Kong last month, while outbound traffic slipped 13%. Since the protests took root, U.S.-traded shares of the airline have slipped 20%, and it's unclear how they might immediately recover as the turmoil in the company's home market continues.

Though a presence in Hong Kong is no immediate reason to sell a company, it's important for investors seeking the best companies to understand their portfolio's exposure to Hong Kong's economy and monitor the situation there. So far, many companies are proving able to compensate for losses through sales in other regions, but the full picture will only appear once Hong Kong emerges from the political haze.