Please ensure Javascript is enabled for purposes of website accessibility
Free Article Join Over 1 Million Premium Members And Get More In-Depth Stock Guidance and Research
By Billy Duberstein - Nov 22, 2019 at 9:29AM

Sentiment for the cosmetics retailer hasn’t improved since its surprise downshift this summer and news this week just added to investor concerns.

Not many growth stocks have had as bad of a 2019 as Ulta Beauty ( ULTA 3.68% ). Though Ulta's competitive advantages remain intact, the overall cosmetics industry -- where Ulta gets more than 50% of its revenue and which contains some of its higher-margin products -- is slowing. After several years of very strong growth due to the adoption of new makeup routines, the surprise slowdown caused a big re-rating of Ulta's stock downward in late August.

However, while many investors were hoping for a strong bounce-back, it doesn't appear an industry rebound will be forthcoming in the near term. Even CEO Mary Dillon seemed to hint that there wouldn't be a quick fix, as a lack of new innovation is bringing growth in this consumer discretionary sector to a halt.

Unfortunately, not just one but several news events this week seemed to indicate that Ulta is still having trouble in this "new normal" for the industry. Here are the lowlights of Ulta's very bad week. 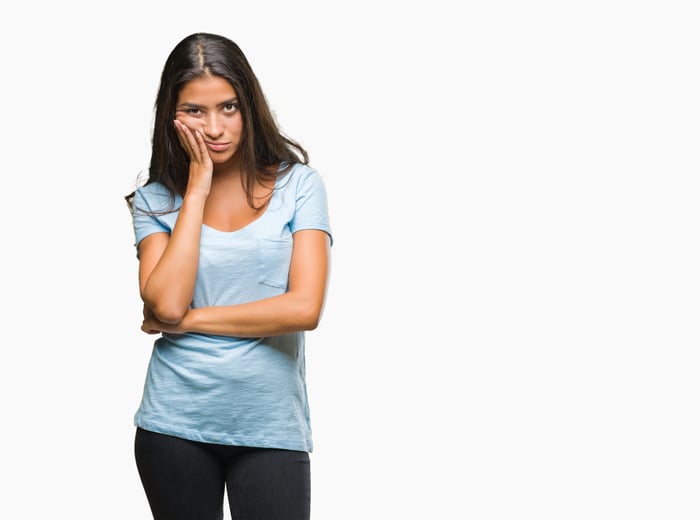 A key executive is leaving

On Thursday, Nov. 21, news broke that Tara Simon, SVP of Prestige Merchandising, is leaving the company at the end of November. This is a curious departure, as prestige makeup had been the category that catapulted Ulta to new heights over the past few years.

On one hand, it could be a worrisome sign that the category is set to enter a prolonged period of softness, and Simon is simply getting out at the end of the strong era for the category. This seems to be the view of Piper Jaffray analyst Erinn Murphy, who has a cautious $250 price target on the company. On the other hand, the executive departure could have also been orchestrated by CEO Mary Dillon, who may be seeking a fresh take on a category that has suddenly turned weak. That may spur hopes for a turnaround, but again, it's not likely to happen in the near term.

Speaking of analysts, more are pessimistic

On the subject of analysts, two sell-side analysts recently initiated coverage on Ulta's stock with some of the lowest ratings yet to come from Wall Street. On Nov. 12, Adrienne Yih of Barclays initiated coverage of Ulta Beauty with an equal weight rating and a $251 price target on Nov. 12. That, however, was an improvement over the street-low $215 price target doled out earlier in the month by Nomura Instinet analyst Michael Baker.

Ulta has an average price target of $283 and a high price target of $375, so these recent initiations are certainly discouraging. While investors shouldn't pin their investing decisions on these analysts' opinions, those with the freshest eyes seem to be taking a dimmer view of the sector and Ulta's earnings multiple.

This month, Ulta held a large sale designed to boost sales during this soft period. The company informed loyal customers that it would be opening in its stores an hour early on Saturday and Sunday, Nov. 15 and 16, and would be giving out big discounts.

However, according to the New York Post, when eager Ulta rewards members showed up, some of the stores weren't open, leaving some out in the cold. When stores did open, some loyal UltaMates were dissatisfied with the "measly" $5 coupons given out. Other discounts also had conditions hidden in the fine print, like being contingent on signing up for an Ulta credit card.

And finally, a lawsuit

Ulta capped off its rough week by getting sued. Multilevel marketing company Mary Kay filed a suit alleging that Ulta infringed on the term "Lash Love," which Mary Kay apparently trademarked in 2011. Mary Kay alleges that the term was used as "a prominent designator for [Ulta's] kit," meaning Ulta is featuring the term and product front and center to market its new makeup kits.

This isn't necessarily a big deal for Ulta, which is diversified and not necessarily dependent on its private label "Lash Love" marketing. Nevertheless, a lawsuit thrown on top of everything else is still another headache Ulta has to deal with.

Prepare for a long winter

Ulta reports earnings on Dec. 5. With the slowdown in prestige cosmetics still a relatively new phenomenon, I wouldn't bank on a turnaround to be revealed in that report.

Still, over the long term, Ulta appears to have an edge over its rivals with its winning business model and loyalty program. In addition, its valuation, which has shrunk to just under 20 times earnings, has already reflected much of the current negative headwinds. Investors may need to exercise patience before seeing Ulta shares rise again. It doesn't appear there is much of a change in the sector since last quarter's shocking shift in fortune.