Cloud-based communications specialist Ooma (NYSE:OOMA) reported earnings on Thursday night, covering the third quarter of fiscal year 2020. The company exceeded analyst expectations across the board and reported a small profit where Wall Street would have settled for a loss. Investors loved these strong figures, sending share prices 24% higher by the end of Thursday's extended trading session.

Ooma's third-quarter results by the numbers

The average analyst had been looking for a net loss of $0.05 per share on sales of approximately $38.4 million. Ooma exceeded both of these targets, swinging to an adjusted profit on the bottom line.

Restructuring charges of $3.1 million and noncash expenses for stock-based compensation of $3.4 million made nearly all of the difference between Ooma's deepening unadjusted losses and the improving non-GAAP bottom line.

The number of residential users held steady year over year at 818,000 names. Revenue in this segment still rose 3.6% thanks to higher average revenue per user (ARPU).

Ooma's business products and services saw a 46% increase in the customer count to 220,000 accounts. Revenue in this division surged 67% higher, lifted both by rising subscriber numbers and higher ARPU.

In an effort to focus more tightly on business customers and to shed underperforming operations, Ooma stopped selling Smart Cam video cameras during the third quarter. Engineers for this project have been reassigned to other tasks, mostly in the related field of business security services.

Looking ahead, Ooma raised the midpoint of its full-year revenue guidance by 1.3% to approximately $151 million. Adjusted earnings should land near $0.01 per share in the fourth quarter. Both of these targets stand comfortably ahead of the corresponding Street projections, which called for full-year sales in the vicinity of $148 million and an adjusted fourth-quarter loss of $0.07 per share. 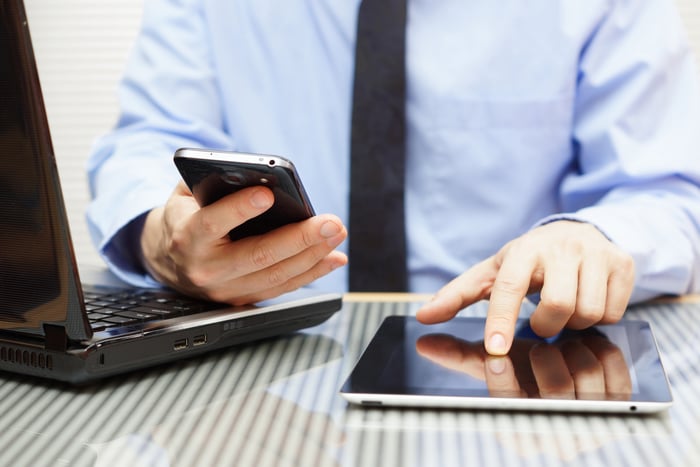 This was the first instance of positive non-GAAP earnings in Ooma's history, but the management team wants to make a recurring theme out of that idea. Speaking on the third-quarter earnings call, CEO Eric Stang said that he wants to support shareholder value by operating the company profitably from here on out.

"While we have an exciting road map ahead for further development, we also now can leverage the advances we've made over the last several years," he said. "This leverage, along with the strategic shift I just mentioned, will allow us to bring down our engineering spend as a percent of sales to drive non-GAAP profitability without compromising our growth potential."

What's next for Ooma?

Cloud communications is poised to replace traditional telecom services in a big way. Ooma's fantastic results in the business division prove that point, and the company's increased focus on that fast-growing operation should help accelerate this secular trend.

Then again, I've been expecting cloud-based communications sales to skyrocket for years now, and the actual rocketing has been limited to a few bright spots against relatively muted growth rates overall. I guess the world isn't quite as ready for internet-based voice and video communications services as I had thought.

That being said, the end markets are pretty much destined to appreciate the higher functionality and lower costs of cloud communications over time. If you like sector leaders such as 8x8 (NASDAQ:EGHT) and RingCentral (NYSE:RNG), there's no reason not to keep an eye on Ooma's scrappy little outfit as well. If nothing else, the company might be a buyout target if a more traditional telecom wants to kick-start its internet-based services. The road ahead may be bumpy but I expect it to lead to somewhere nice.