These companies are tied to the infrastructure sector -- and to each other -- but they are very different investments. Here's the lowdown.

At first blush, there doesn't seem to be much in common between an asset management company like Brookfield Asset Management ( BAM -3.02% ) and renewable power owner and operator TerraForm Power ( TERP ). But they are joined, indirectly, at the hip. Read on to learn how they're related and which one might make a better fit for your portfolio.

Brookfield Asset Management is often referred to as an alternative asset manager. That's because its focus for the last hundred years or so has been on putting money to work in the infrastructure space. For a long time, it did this for itself and private clients. More recently, it has started a collection of master limited partnerships that invest in infrastructure, including Brookfield Infrastructure Partners, Brookfield Renewable Partners, and Brookfield Property Partners. A few years ago, Brookfield Renewable Partners took a majority stake in TerraForm Power. Thus, Brookfield Asset Management, indirectly, controls TerraForm Power.

This is a far more important distinction than you might think. TerraForm Power makes money by building, buying, and operating solar- and wind-power assets and selling the electricity they generate under long-term contracts. Brookfield Asset Management gets paid fees for managing other people's money, including running the limited partnerships it controls. These are vastly different businesses.

If you are looking for a direct play on renewables, Brookfield Asset Management isn't the best option around. TerraForm Power is a better option for that. (Though if you are looking at the renewable space, you should also examine larger and more diversified Brookfield Renewable Partners, a significant portion of whose portfolio is in hydro assets). While the choice here clearly depends on what you are looking to own, there are benefits and drawbacks to each of these names.

Brookfield Asset Management has proven adept at expanding its assets under management, with a 15% compound annual growth rate between 2014 and 2018. This is a key metric for the firm, since the more money it runs, the more it gets paid in fees. In 2019, meanwhile, it bought bond specialist Oaktree Capital Partners. That will lead to an outsized increase in assets this year while also expanding the company's position in another asset class. While Brookfield Asset Management's earnings tend to bounce around a little bit, revenues, cash available for distribution, and dividends have grown fairly steadily over the past decade.

The company's most recent performance has come within a bull market, when it's far easier to raise capital. That said, Brookfield remains positive on the industry trends it's riding. In fact, it expects investors to increasingly favor the types of investment niches it focuses on because of the historically low-interest-rate environment. The company points out that some $6 trillion has been put to work in hard assets since 2009 but that it projects another $25 trillion will flow into the space by 2030. If that pans out, Brookfield Asset Management should continue to see robust growth right along with the industry.

Notably, since the company uses limited partnerships, a good chunk of the assets it runs are "permanent." Investors can sell the units of a limited partnership, but the partnerships continue to exist. That's a very different scenario from cash that is managed directly, which can be pulled from the company. So Brookfield has a solid foundation even if the current bull gets mauled by a bear.

All in, if you buy in to the idea that investors will increasingly look to invest in the types of assets in which Brookfield Asset Management specializes, then it looks like a well-positioned company. However, if the stock is to justify its nearly 50% advance so far in 2019, the company's growth expectations need to pan out as planned. More cautious investors should probably look elsewhere, but those with a growth bias might like what they see. Dividend investors looking to maximize their income stream, meanwhile, should definitely find an alternative, since the 1.1% yield here is far from impressive.

All of that having been said, Brookfield's price-to-free cash flow ratio is around 13.6 times today, well below its five-year average of 18.4. So on some levels, it looks relatively cheap, but that's a hard statement to stomach after such a strong advance in 2019. Caution is probably in order until the Oaktree deal has seen an anniversary, which will allow for better financial comparisons.

How about TerraForm Power? 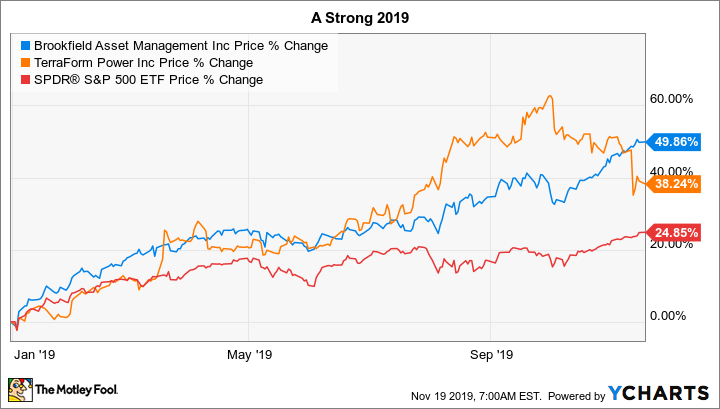 With a focus on wind and solar assets in North America and Europe, TerraForm Power controls roughly $9 billion worth of renewable power infrastructure. The goal is to have a roughly equal mix of solar and wind in the portfolio. It is capable of producing around 4 gigawatts of power annually today. That power is largely sold under long-term contracts, making the top and bottom lines fairly reliable and providing ample cash flow to support the stock's 5% dividend yield. Clearly, if you are interested in dividends, TerraForm Power is a better option than Brookfield Asset Management.

Looking forward, TerraForm Power should benefit as the world continues to shift toward renewables. However, with Brookfield in the driver's seat, it has switched gears from its historic approach. Now TerraForm is not buying just to buy; it is actively looking to acquire assets that are reasonably priced or, better yet, out of favor for some reason (its purchase of Saeta Yield is a good example). While it's doing that, it is focusing on improving the operations of the assets it owns and buys to improve returns (upgrading turbines in its wind fleet is a great example here). At the same time, it has been strengthening its balance sheet, taking advantage of the low-interest-rate environment and the backing of the Brookfield family of companies. The dividend, meanwhile, is targeted at between 80% and 85% of cash available for distribution, which is reasonable given the contracted nature of its cash flows. The goal is for mid-single-digit dividend growth over time.

Like Brookfield Asset Management, TerraForm Power's stock has had a good run so far in 2019, rising nearly 40%. It is, however, around 15% off of its high for the year. TerraForm Power's price-to-free cash flow ratio is currently around 10 times, roughly in line with its three-year average (the period that aligns most closely with Brookfield's investment in the company). In other words, investors are probably paying full price here at the very least. So it is hardly a screaming buy, but for long-term investors with an income bias, it is probably worth a closer look.

So is TerraForm Power better than Brookfield Asset Management or vice versa? This isn't an easy call. For income investors, TerraForm Power is clearly a better option. For those looking for growth, Brookfield Asset Management would seem the better fit. But TerraForm's contract-based business seems likely to have better staying power over time and, notably, in the event of a market downturn. This suggests that conservative investors will likely be happier owning TerraForm Power. That, in the end, gives the solar and wind owner the nod here in my book.