Estee Lauder (NYSE:EL) announced this week that it is acquiring Have & Be Co., a Korean-based cosmetics company that markets the Dr. Jart and Do the Right Thing brands. The company bought a minority stake in Have & Be in 2015, and as part of that agreement is fully acquiring the company.

CEO Fabrizio Freda said that Have & Be's "incredible innovation capabilities and artistic expression make it a terrific, strategic addition to our diverse portfolio of prestige beauty brands. We look forward to continued global growth in the years to come."

It's not just Estee Lauder

If you own a lipstick, chances are Estee Lauder made it. The U.S. company, which manufactures cosmetics under its own name, became a huge conglomerate over the last half a century with its keen sense to diversify its holdings. It currently owns 29 international brands. 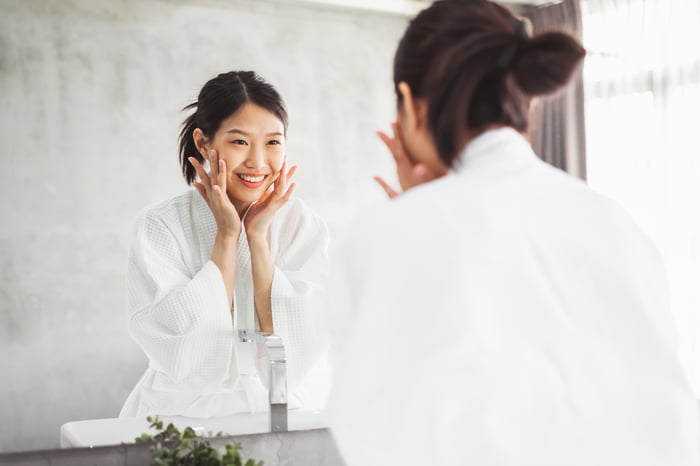 The company's first foray into other brands was the creation of its own sister brands, including Clinique, Aramis, Prescriptives, and Origins. But its real savvy came through in its buyouts of Canadian MAC Cosmetics and makeup artist Bobbi Brown's eponymous collection in the 1990s. These acquisitions helped the company stay current on the makeup scene and grow into a billion-dollar company.

The company hasn't let up, and it continues to purchase up-and-coming, trendy lines to meet new demand and shifting preferences.

An eye toward the future

Estee Lauder herself, the founder of the company, saw the opportunity to target different groups and grab a greater share of the overall cosmetics market. This turned her company into a megabrand instead of another stand at Saks Fifth Avenue, and the strategy has remained a tenet of the company, even as it changed from a family-owned operation to a publicly traded company in the 1990s.

Recently, as millennials take a tighter grip on retail, the company has made newer purchases, including younger-focused brands Too Faced and Becca in 2016. Freda said, "Our portfolio strategy includes growing existing brands and discovering new high-potential acquisitions that align with our values and offer a long-term outlook for success."

Estee Lauder continues to branch out into Asian markets, seeing high growth there, and this latest acquisition is meant to firmly establish the company as a leader in that region.

In addition to bolstering its size and top line, the company's newest brands help it achieve success in newer channels.

The specialty brands are sold in smaller boutique shops geared toward millennials rather than the large department stores, for so long the norm for cosmetics sales, that are now struggling.

The company has also eased into e-commerce, spending almost 70% of its marketing budget on digital channels and seeing online growth in all markets.

When Estee Lauder took its first stake in Have & Be in 2015, it had the vision to recognize that the Asian market was growing, and that it had a high rate of travelers as well as a strong interest in skin care.

Both of these were crucial factors in the company's first-quarter 2020 results. According to Freda, "Our sales growth was led by excellent results from our international markets, particularly in China and our other emerging markets, the skin care category, the travel retail and online channels globally."

The company's method in the past has been to buy brands that have growth potential and then, with its large R&D budget, propel them into superstars. When it bought La Mer in 1995, the brand brought in $1 million in sales. In 2018 it made over $1 billion, one of four brands in the Estee Lauder portfolio to hit that number.

With almost half of total sales coming from skin care, and with Asian markets showing the greatest growth, this deal looks like a no-brainer. And with Estee Lauder's share price already up more than 30% this year, this is another reason for shareholders to feel confident.