Too many store openings and increased costs are putting a damper on Ollie's growth narrative.

Shares of Ollie's Bargain Outlet ( OLLI -4.00% ) have taken a beating, dropping more than 15% after the company missed on its second-quarter earnings, which featured losses of 1.7% in comparable sales, 15.6% in earnings per share, and 10% in net income year over year.

Taking a step back from the recent quarter, let's see if Ollie's is a buy at this point and find out if the recent quarter results were a short-lived event or a harbinger of long-term problems -- potentially breaking the growth narrative. 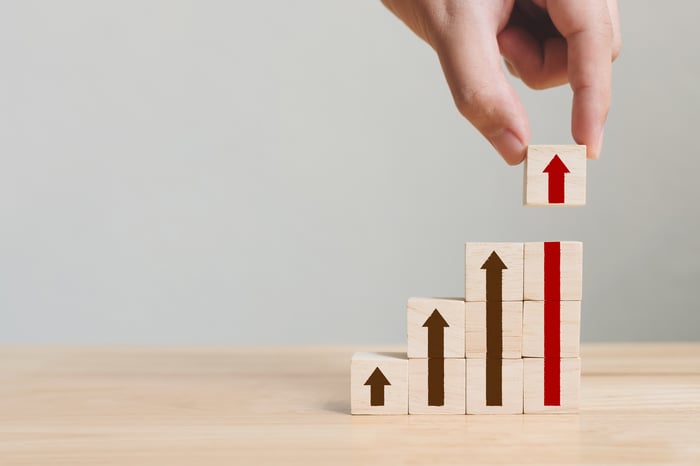 Management stated that the latest quarter's weakness was due to a combination of factors, including cannibalization of Ollie's stores by its Toys R Us store conversions; a difficult year-ago comparison for same-store sales; and a higher number of recent store openings put a strain on the supply chain and inventory levels (Ollie opened 29 stores in the first half the year, more than double what it opened in the first half of 2018).

The fact that management is blaming new store openings for the weakened comp growth is concerning, as stores that have been open for one year wouldn't typically be seeing a peak in earnings within their first year of business. Ollie's also lowered full-year guidance for the year, as comps are projected to decrease between 0.5% and 1.5% against the original projection of growth between 1% and 2% -- pointing to even more weakness within comps throughout the remainder of the year.

As the new store openings put a strain on the supply chain, opening a new distribution center to get ahead of the growth will be key if new store openings continue at the current pace. A third distribution center is on the way, expected to be on line in 2020. This will enable efficient inventory control and logistics cost reductions in addition to a capacity increase to 500 stores -- leaving room for 168 new stores beyond the current 332 stores in operation.

Overall, Ollie's financials are improving. Cash on hand came in at $78.5 million for the second quarter, up $29.4 million year over year. This was driven by higher cash from operations. Ollie's retains a net sale increase of 15.33% year over year with a trailing-12-month gross profit margin of 39.6%. It opened 29 stores in the first half of 2019, more than double the number of stores opened in the first half of 2018.

Ollie's CEO, Mark Butler stated during the earnings call that "the strength of our new stores is, undoubtedly, the fuel for our growth." This is concerning as the growth needs to be led from a combination of factors, including increasing sales of existing locations in addition to new store sales. This may leave some investors wary, as a decline in store openings may signal a slowdown in company performance.

The case can be made that Ollie's is experiencing growing pains, as new store locations are opening rapidly and are apparently getting away from management's growth strategy. Taking the recent earnings report into account in addition to the revised forecasts, investors need to be cautiously optimistic going into the next earnings announcement as this quarter may be showing some growing pains. Keeping an eye on new store openings, same-store sales growth rates, and gross margins during the next few quarters will give investors a clearer view as to the effectiveness of the growth strategy and the sustainability of the business model.

Since this growth stock is priced for growth with a forward price-to-earnings ratio of 33, Ollie's expansion rates will be key going forward. After a share price fall of more than 15% from the recent earnings announcement, investors wanting to add Ollie's to their portfolios should sit on the sidelines until they know how the company did in the third quarter. At the very least, they should see that Ollie's is on a continued growth path and that the second quarter was a minor hiccup.