If you start your day eating a bowl of cereal with milk and then drive your car to work or elsewhere, you owe a lot to the U.S. Midwest. Indeed, farmers in the middle part of the country supply much of the grain and dairy products we consume. And the world's modern auto industry began in Detroit, when a light bulb went off inside Michiganite Henry Ford's head and he began using an assembly line to churn out Model Ts.

On that note, where would any of us be without the indispensable light bulb, which was invented by Ohio native Thomas Edison? And if there were no Midwest, there would be no Mickey Mouse or other Disney products (founder Walt Disney was born in Chicago and raised in Missouri), no aviation-pioneering Wright brothers (Ohio), and -- I'll bet this is a new one for you -- no screen door inventor Hanna Harger (Iowa).

In short, an outsize proportion of products that we eat, use every day, and have depended upon for generations have roots in our country's Heartland, which seems to have long had an inventiveness compound in its drinking water. So doesn't it make sense to go fishing for top stocks in this region?

Two Midwest stocks that are worth considering buying are paint maker Sherwin-Williams (NYSE:SHW) and backup power specialist Generac Holdings (NYSE:GNRC). Both are crushing the broader market in 2019, just as they've done over the long term. 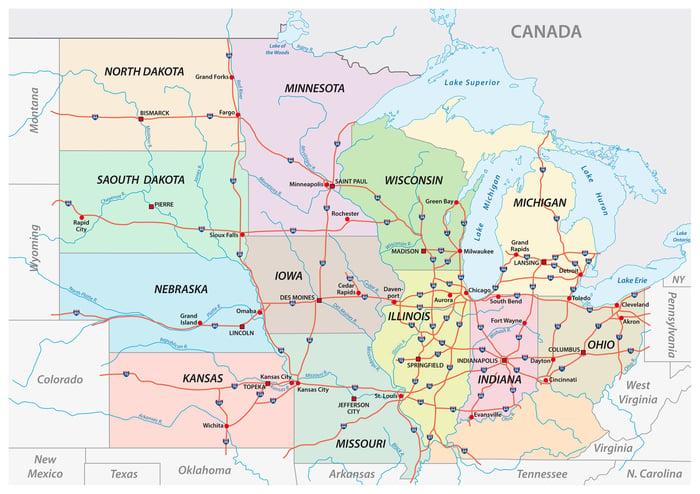 Sherwin-Williams is a leading global maker of paints, coatings, and related products for industrial, commercial, and retail customers. Its roots date back to 1866, the year after the Civil War ended and Abraham Lincoln was assassinated. (The Midwest can also lay claim to arguably the best U.S. president, as Lincoln spent his formative years in Indiana.)

Soon after its founding, the company invented the first pre-mixed paint and introduced the resealable can. These innovations made it much more convenient for people to use and reuse paint, and Sherwin Williams' business grew quickly. The company went public in 1920.

In the third quarter, Sherwin-Williams' sales increased 2.9% year over year to $4.87 billion, and adjusted earnings per share jumped 17% to $6.65. Results were driven by the Americas group, which is benefiting from the robust U.S. housing market. This segment's revenue grew nearly 9% and profits rose 15% from the year-ago period.

The paint industry is an attractive one for investors because it has relatively high barriers to entry, it sells a product that customers buy over and over again, and it isn't overly sensitive to the economic climate. Moreover, Sherwin-Williams has a strong brand name.

Generac makes backup power solutions. It was the first company to engineer affordable home standby generators, and today is the leading manufacturer of home backup generators.

The company still seems to fly under many investors' radars, despite recently garnering a flurry of press stemming from Northern California's historic blackouts. These events were due to electric utility PG&E (NYSE:PCG) instituting several rounds of sweeping pre-emptive power shutoffs during dry and windy weather to help lessen the chances of its equipment starting additional wildfires.

In the third quarter, Generac's sales and earnings beat Wall Street's consensus estimates. Sales rose 6.9% year over year to $601.1 million, earnings per share increased 6.3% to $1.18, and adjusted EPS was flat with the year-ago period at $1.43. More importantly, the company raised its full-year guidance because of the strong demand for residential backup power solutions. In 2019, it now expects revenue to grow 8% to 9%, up from 6% to 7%, year over year, and an projects an adjusted EBITDA (earnings before interest, taxes, depreciation, and amortization) margin of 20.5%, up from 20%.

While the Street is modeling for 8% average annual EPS growth over the next five years, Generac seems to have a good shot at exceeding this estimate. Indeed, it's solidly beat analysts' earnings projections in all three quarters of 2019 -- by percentage ranging from 8% to 18%.

And let me close with a timely fun fact: The NFL was founded in the Midwest -- in Canton, Ohio -- in 1920. And guess who has won the most championship titles? Yep, you got it, a team that hails from that region: the Green Bay Packers.