As the old joke goes, retirement kills more people than hard work ever did. That's one reason to think through who inherits your IRA after you're gone -- just in case you don't stick around to spend it all.

Choosing an IRA beneficiary is serious business. Rules about how the beneficiary can use the money and whether it's protected from creditors differ based on the beneficiary's relationship to you. You'll want to understand those implications before you decide who gets those IRA assets.

Who can be your IRA beneficiary?

Your options for beneficiaries include your spouse, children, grandchildren, or any other individual you know. Beneficiaries who are legally minors must have a guardian or conservator, appointed by you or by the courts. You can also name a trust or a charity as your IRA beneficiary. And if you can't decide among these options, you can split the IRA up among them, designating a specific percentage to each beneficiary. 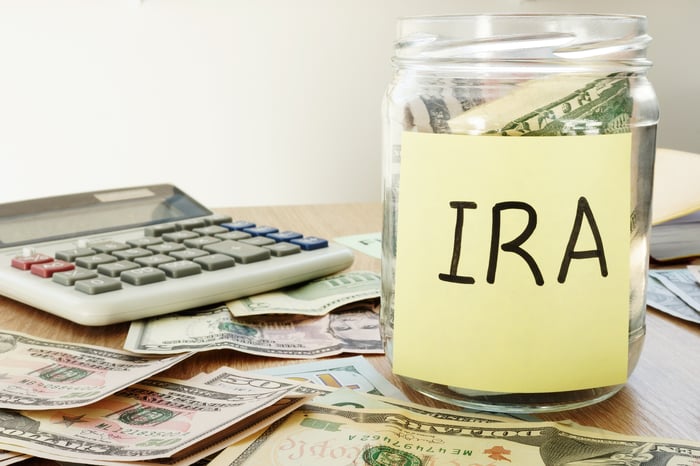 Spouses who inherit an IRA can manage the account as if it were their own. They can roll the funds into their own IRA and change beneficiaries. The funds are also protected from creditors in a bankruptcy filing, as they would be for the original owner. Nonspousal beneficiaries have less freedom. They have to keep the funds separate from their own retirement savings in what's called an inherited IRA. And those assets might be exposed to creditors' claims.

So what does all this mean for your retirement accounts? Depending on whose name goes on that beneficiary line, your IRA assets are subject to certain risks. Here are four to consider before you decide.

1. Your spousal beneficiary makes changes after you're gone

Once you're out of the picture, your spouse can roll the funds into an existing IRA or leave them in an inherited IRA and take distributions. Your spouse can also change the beneficiaries as needed. All that flexibility is nice unless you have specific wishes for how the money should be handled.

Say you have children, from this marriage or a previous one, and you'd like them to be named as beneficiaries after they turn 18. Your spouse is under no obligation to comply. If he or she remarries, your funds might end up with the new spouse or even with children from your spouse's new marriage.

2. Creditors of your nonspousal beneficiary wipe out the IRA assets

Federal law offers no protection to inherited IRAs owned by nonspousal beneficiaries in a bankruptcy proceeding. Courts have also allowed inherited IRAs to be split up in divorce settlements. That means your funds could be wiped out by debt, lawsuits, or even a bad breakup.

There is some good news, though. While federal law doesn't shield these assets in bankruptcy, state law might offer some protections. For example, Texas Property Code specifically exempts inherited IRAs from creditors' claims.

According to the World Health Organization, 50 million people worldwide live with dementia. If a spousal or nonspousal beneficiary is deemed unable to make financial decisions for some reason, your IRA assets could become the responsibility of a court-appointed guardian. The court will then be in charge of how those assets are managed and distributed.

Even if your beneficiaries remain physically and mentally healthy, there's nothing stopping them from making bad financial decisions. As an example, nonspousal beneficiaries can cash out the assets in an inherited IRA immediately to buy a sports car if they wish. And that might cause other problems. Inherited IRA distributions are taxable; if your beneficiaries don't hold back some cash to pay their tax obligations, they'll be in trouble with the Internal Revenue Service.

4. Your trust beneficiary is too expensive to maintain

If the thought of your beneficiaries wildly spending your hard-earned retirement savings drives you crazy, you can exert more control by establishing a trust and naming it as your IRA beneficiary. You can then establish rules for the distribution of income or even designate a minor as the beneficiary. For example, you might set the trust up to provide income to your spouse first and then your children or grandchildren after your spouse passes. And because the assets are owned by the trust, they can't be drained by the creditors of your surviving relatives.

The big challenge with this approach is the expense. If your IRA assets aren't substantial, the cost of creating and maintaining the trust takes a big bite out of the inheritance.

If you don't have a strong opinion about what happens to your IRA assets, the simplest option is to designate a spouse as your beneficiary. Things get more complicated if you're not married or you want to designate assets to children. Establishing a trust as your beneficiary offers the highest level of control but also comes with a price tag. No matter what you decide, make sure you understand all the risks of your choice.