Apple ( AAPL -0.32% ) is one of the most fascinating business success stories of all time. It would have been impossible to imagine in the late 1970s how two guys (Steve Jobs and Steve Wozniak), making circuit boards in a garage, were starting down a path that would create one of the most iconic consumer brands in the world.

Today, Apple has 1.4 billion active users around the world, 137,000 employees, and $260 billion in annual revenue. But how much money would you have in the stock if you bought at the IPO? 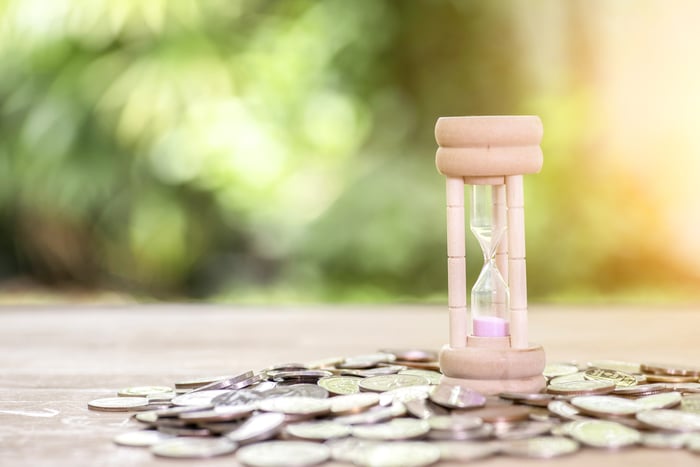 The results of patient investing

Apple first sold shares to the public on Dec. 12, 1980, at $22 per share. The stock has split four times -- three times at 2-for-1, and one split at 7-for-1. This means you would have received two shares for every one share, or seven shares in that one case. The way stock splits work is that you receive more shares but the stock price is cut proportionally, so the value of your investment stays the same.

If you had bought just one share of Apple, you would own 56 shares today after the stock splits. Those shares would be worth $14,896 at the current price of $266 per share.

A $100 investment would have purchased 4.54 shares at the IPO price. After the stock splits, you would now be the lucky owner of 254 shares of Apple, which would currently have a value of $67,564.

The return in Apple stock doesn't sound like a lot since we're talking about one of the greatest tech companies ever. However, that's only for a relatively small investment of $100. In percentage terms, Apple stock has compounded at 18% per year since its IPO price. That means that if you had invested $10,000 in Apple in 1980, you would have about $6.7 million.

Dividends would have padded your investment return somewhat. Apple first paid a dividend in 1987, but financial trouble caused the company to suspend dividend payouts in 1995. After selling millions of iPods, iPhones, and iPads, and raking in billions in profits, Apple reinstated the dividend in 2012. The company currently distributes a quarterly payout of $0.77 per share. With 254 shares, you would be earning $782 every year in dividend income -- a nice return on an original investment of just $100.

Deep faith in the Apple brand would have been required

It wouldn't have been easy to hold Apple all those years. In fact, it would have been a smart move to sell Apple and buy shares of Microsoft in the early 1990s. After Steve Jobs resigned from Apple in 1985, the company entered a dark period. Management during those years focused more on profits instead of making great products, as Jobs explained in the biography Steve Jobs by Walter Isaacson. Apple lost a significant amount of market share to Microsoft during that time.

But most of us know how the story ends. Jobs officially returned to the company in 1997. He discovered the brilliant design work of Jony Ive, who had been working for Apple since 1992. Following the philosophy that less is more, the duo went on to design incredibly successful products and fulfilled Jobs' vision to change the world.

At the heart of Jobs' design approach was to make technology accessible for everyone. Some thought it was a crazy idea that people would find any use for a computer in the early 1980s, but the Mac changed the idea of what a computer could be. Jobs' thinking influenced the design of the iPod, which was first introduced in 2001. It was the first user-friendly MP3 player that features a simple interface, a scroll wheel to navigate, and the built-in support of iTunes to legally buy all your songs. The built-in user base of the iPod laid the foundation for Apple to sell tens of millions of iPhones and iPads later on.

Jobs' ideas have filtered through the company so completely that it has even influenced the design of Apple's new campus, Apple Park, in Cupertino, California.

Apple is not floundering in the second post-Jobs era the way it did between 1985 and 1995. Apple stock is currently hitting new all-time highs, as the company sees strong growth from its wearables and services segments. Its user base also continues to gradually expand around the world each year.

Apple's ongoing success after Jobs' death in 2011 is a testament to his leadership skills. Despite the fact that Jobs was famously difficult to work for, it's obvious that he established a culture for excellence that should carry Apple forward for many years.

Most of us were not fortunate enough to buy Apple at the IPO, or even when Jobs returned in the 1990s. But that's OK, because Apple still has plenty of growth potential, especially in new services like Apple TV+ and advertising. A small investment could still be very rewarding over the long haul.