Black Friday is no longer a one-day event, as retailers push the boundaries on just how early they begin discounting their merchandise. Walmart (NYSE:WMT) began offering holiday deals almost a week before Halloween this year, although it didn't actually call them Black Friday sales, but rather Early Drop Deals.

That doesn't mean brick-and-mortar retailers don't matter. The National Retail Federation (NRF) forecasts that consumers will spend anywhere from $728 billion to $731 billion on holiday shopping this year, a 4% increase from 2018. But e-commerce sales will capture only $167 billion of that at most, or about 23%. That's a significant amount to be sure, but it pales in comparison to the amount consumers will spend at physical stores.

So there are clues we can use to figure out which retailer might win this Black Friday. 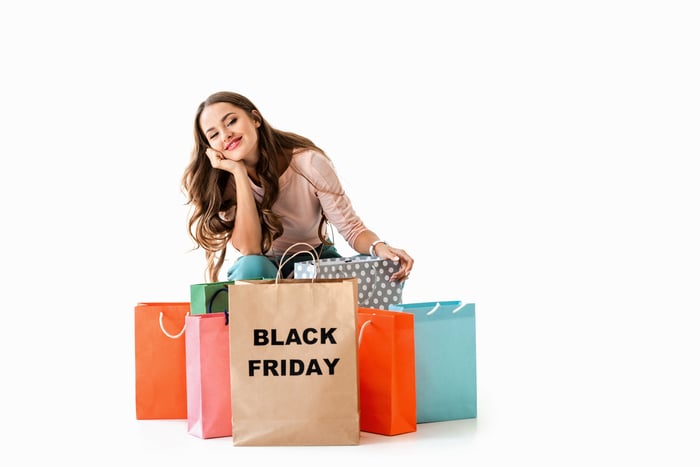 Searching for a clue

It's clear that Amazon.com (NASDAQ:AMZN) will have a really big day on Black Friday. Its Prime Day sales event this past July was bigger than last year's Black Friday and Cyber Monday sales combined. Consumers will naturally gravitate to the website again in anticipation of similar kinds of sales. The e-commerce leader actually opened its virtual doors to Black Friday sales beginning on Friday, Nov. 22.

But don't count Walmart out. The retail giant advertises its online discounts early and often, so consumers get a heads-up on where to go for sales if they want to get their holiday shopping done early. Amazon doesn't publicize its deals until just before they go live.

Google search trends show that consumers looked for "walmart black friday" over "amazon black friday" by more than two-to-one leading up to the big day last year, although the gap narrowed considerably on Black Friday itself. 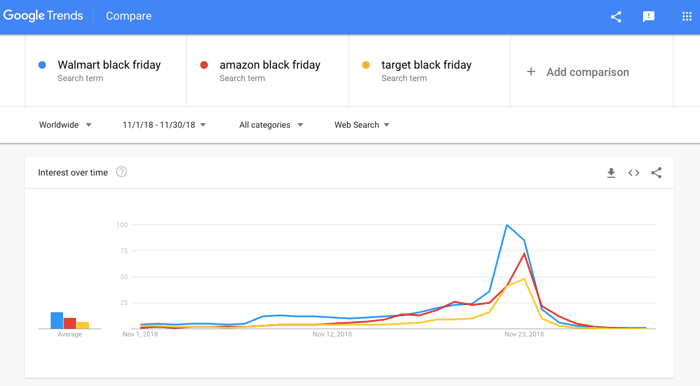 For the holiday shopping period as a whole, Walmart benefits because consumers want to shop early. The NRF said 56% of shoppers had already begun buying Christmas presents by the first week of November, up from 48% a decade ago, though only 4% have already completed their holiday shopping (who are those people?).

The world is moving online

Yet Amazon doesn't need to worry, because just about everyone understands that the e-commerce leader is the go-to place for online shopping. More than half of consumers start their online shopping by searching for a product on Amazon, according to consumer insights platform Toluna.

Data analytics firm Hitwise said Amazon accounted for 56.8% of all online Black Friday transactions in 2018, compared to just 8.4% for runner-up Walmart. Amazon also completed about four times as many e-commerce transactions as Walmart on Thanksgiving Day, and eight times as many on Cyber Monday.

With some $6.22 billion in Black Friday e-commerce sales last year, Amazon.com's take may have been in the neighborhood of $3.9 billion, assuming its average transaction size was similar to that of other e-commerce retailers.

Walmart has said that some 22 million people visit its stores on Black Friday. If those consumers spent an average of even $200, that would total $4.4 billion of sales. We could probably add a couple of dollars on top of that for Walmart's own prodigious e-commerce efforts. Considering that Walmart averages about $1 billion of sales a day in the U.S. (not even counting its Sam's Club chain), a Black Friday sales figure in this neighborhood seems entirely plausible.

So which retailer is going to win Black Friday this year? Although neither Amazon nor Walmart provide specific dollar amounts on the sales they generate on any particular day -- Black Friday or otherwise -- it seems likely that Walmart will remain the king of retail. After all, Walmart still reports significantly higher revenue than Amazon each quarter.

It's a good bet that Amazon.com will narrow the gap between between itself and Walmart this year. As customer traffic continues to fall at brick-and-mortar stores while online shopping rises, it is inevitable that the online channel will one day dominate. But for now, we should expect Walmart to win Black Friday.