In a sense, the question has already been answered by paintings and coatings company PPG Industries' (NYSE:PPG) track record of dividend payments. After adjusting for stock splits, the company has raised its dividend every year for the last 47 years, making it a senior member of an elite group called Dividend Aristocrats -- companies that have raised their dividends for 25 years or more. That said, investors are usually more interested in the future than in the past, so here's a look at whether PPG is still a great stock for income-seeking investors.

How much PPG can grow its dividend every year

I'll cut to the chase. If you believe the global economy will keep growing over the long term, then the answer is yes. In a nutshell, PPG's demonstrated ability to grow earnings and free cash flow over the cycle suggests investors can look forward to many years of dividend increases to come. 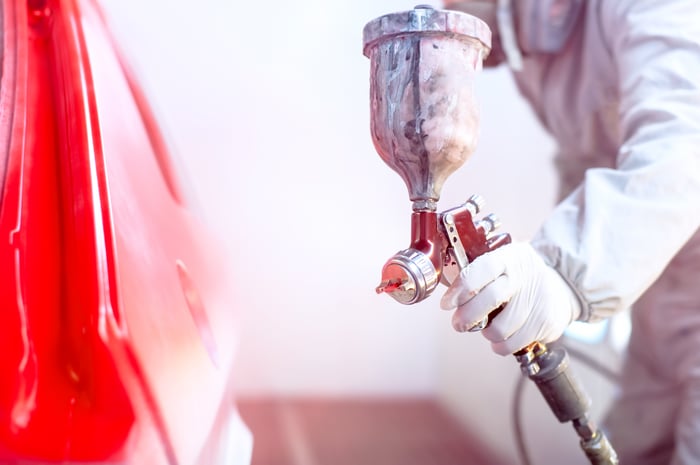 To understand why, you have to use the so-called Gordon Growth Model and look at a financial metric known as the return on equity (RoE). The number is calculated by dividing net income by shareholders' equity in order to calculate how much income the company is generating in comparison to what's been invested in it. A higher number is better.

Once you know PPG's RoE, you can then calculate how much it can grow its dividend every year (g) in the following manner:

My estimation of a reasonable RoE for PPG is 24%. I'll come back to this a bit later, as it's the key to the investment case and essentially determines every number you will read from now on.

Based on the current annualized dividend of $2.04 and estimated 2019 earnings per share of $6.25, and estimated RoE; the annual rate at which PPG can grow its dividend works out to be 16.2%

Using the Gordon Growth Model, you can calculate a theoretical return for an investment in PPG at the current price of $128. This is calculated as follows:

In other words, if you believe that a stock's value is based on the sum of its future dividends, then PPG could theoretically generate a 17.8%-per-year return for you -- a handsome return that will nearly double your money within five years.

The thing about return on equity

Of course, the tricky bit in all of this is assuming a RoE of 24% in the calculations, so let's take a closer look at it quantitatively and qualitatively. I have three reasons it's a reasonable figure to assume.

The first is that the number, conservatively, matches up with what PPG has historically produced. The chart shows that the current trailing-12-month RoE is around 24%, and this is a figure produced in a difficult year for PPG. For example, the coatings industry has been hit by the general industrial slowdown and decline in automotive production this year. PPG is the global leader in automotive original equipment manufacturer (OEM) coatings.

Moreover, if you normalize the boost in earnings and RoE in 2013 and 2014 following the acquisition of Akzo Nobel's architectural coatings business in North America, the 10-year average comes out at 24%. 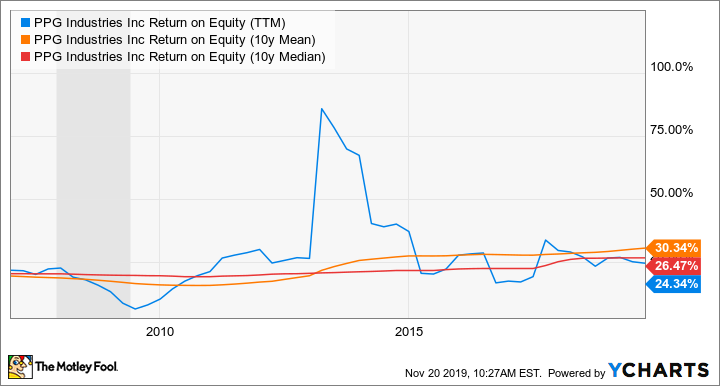 Second, a quick check across its peer group shows that PPG's RoE isn't out of sync with painting and coatings peers like Sherwin-Williams (NYSE:SHW), Akzo Nobel, RPM (NYSE:RPM), and Axalta (NYSE:AXTA).

Third, a look across PPG's current end-market exposure gives a flavor for the areas of the global economy that need to do well in order for PPG to flourish. The company's exposure to automotive OEM is a concern in the near term, but if you believe that automotive and housing markets (70% of architectural coatings go to the residential market, and 75% to 80% is used for maintenance) will see stable growth over the long term, then PPG should be capable of generating the kind of RoE it has produced in the past. 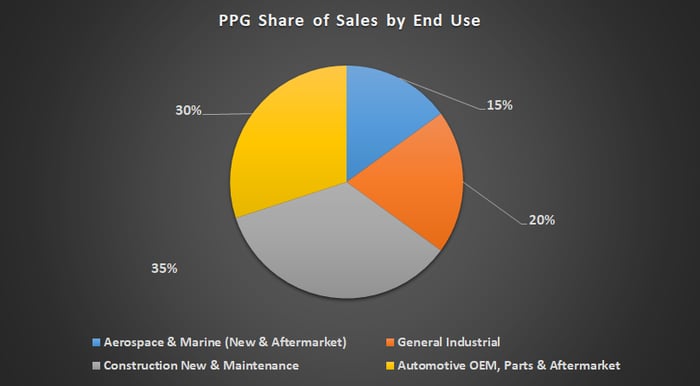 PPG is a decent choice for dividend investors

All told, unless you think the global economy is set to see a step down in growth in the coming decade or so, PPG looks like a decent option for income-seeking investors. The automotive, housing, and aerospace industries are all intrinsic parts of the economy, and until machinery and housing stop needing coating, PPG is likely to see growth opportunities. Meanwhile, the company's ability to generate income from its previous investments (RoE) suggests investors will see many years of dividend growth in the future.