Although President Trump seems to be backing away from his previously announced intention to ban flavored electronic cigarettes, it may not matter to the industry.

States have started enacting their own bans, and retailers including Walmart, Walgreens, and Kroger have announced they would no longer sell e-cigs. Already roiled by the rising incidence of teen e-cig use, policymakers used the recent outbreak of a mysterious lung illness that injured thousands and caused the deaths of dozens to call for tighter controls on the industry, including the ban on e-cig flavors.

Yet despite e-cigs' purported safety benefits -- especially when compared with traditional combustible cigarettes, a record that has been recognized internationally -- U.S. regulators seemingly all but ignore the positive effects they could have on user health, whether adults or teens. The result may be an industry that gets stamped out. 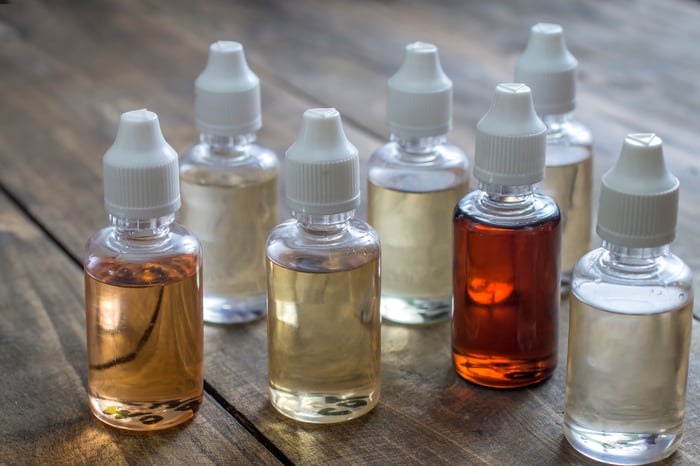 Holding back the flood of teen use

Trump's proposed flavor ban came on the heels of a survey published by the Centers for Disease Control and Prevention and the Food and Drug Administration indicating that over 5 million teens are reportedly using e-cigs, a 38% increase from the 3.6 million using them in 2018.

Juul Labs, the leading e-cig brand, which is trying to survive a rising tide of sentiment against it in policy circles, announced it would suspend all marketing of its Juul device. It will also voluntarily stop selling flavored JUULpods, or the portion of the electronic cigarette that contains the nicotine-infused e-liquid, and cease supporting any industry initiatives opposed to further clamping down on e-cigs.

Juul also subsequently announced it would stop selling mint-flavored JUULpods, too (menthol, however, will continue to be sold).

Other manufacturers don't have the luxury of a deep-pocketed tobacco giant benefactor like Altria (NYSE:MO), which invested $12.8 billion in Juul, and regulations like flavor bans could ruin their business.

Ostensibly allowing only e-cigs that taste like tobacco will help curb teen use, but adults also like flavors, which help make the transition from cigarettes to e-cigs smoother. Last year, a survey of 20,000 adults who frequently use vape product was conducted by U.K. researchers at the Centre for Substance Use Research. It found that flavored e-cigs were used the most by smokers when making their first e-cig purchase.

Banning flavors will discourage more than just teens from using e-cigs, with the health consequences for both groups taking a decidedly negative turn.

An effective ban, regardless

The deadline for e-cig makers to submit their pre-marketing tobacco applications (PMTA) to the FDA to keep their devices on the market is fast approaching, and many manufacturers -- if not most -- might not be able to afford the expense or handle the complexity of the regulatory process.

British American Tobacco (NYSE:BTI) recently submitted its PMTA for its Vuse electronic cigarette, and it does come in a variety of flavors, but with Juul voluntarily ending flavored-pod production and Philip Morris International's (NYSE:PM) IQOS heated tobacco unit only coming in tobacco, mint, and menthol flavors, there may be very few devices on the market that will offer flavors.

Because states are moving on their own to limit flavor availability, the industry's leading player has elected not to offer them, and its rivals may not make the cutoff to keep their products on the market. So it may not matter to the electronic cigarette industry whether President Trump follows through on his ban or not.