The retailer is doing well despite a difficult environment.

Overall, comps rose 1.7% in the third quarter. That's a slowdown compared with the 4.3% growth the company posted in the prior-year period. Comps were up 2% in the domestic business, while they slumped 1.9% in the international business, which operates in Canada and Mexico.

Online sales growth was 15%, up from 12.6% in the prior-year period. That acceleration could have something to do with the company's free next-day shipping offer, which was announced in October. Best Buy uses its stores to fulfill online orders, allowing it to offer fast shipping speeds without a larger network of distribution centers.

In the domestic segment, appliances and services were the star performers. Comparable appliance sales jumped 12.5%, accounting for 12% of total revenue, while services revenue rose 12.9% to 6% of total revenue. Best Buy's revenue total was helped by medical-alert company GreatCall, which was acquired in the third quarter of last year.

Sales in the computing and mobile phones segment, which account for 47% of Best Buy's domestic revenue, rose 3% year over year, while consumer electronics sales were flat. Entertainment sales, which include gaming, tumbled 20.8% year over year. With new game consoles coming in 2020 from Sony and Microsoft, a chill in game console sales is to be expected.

Best Buy managed to lower its operating costs during the quarter, both on an absolute basis and as a percentage of revenue. Selling, general, and administrative expenses were 20.2% of revenue, down from 20.9% in the prior-year period. That helped boost adjusted operating margin to 4.2% from 3.5% in the third quarter of last year. 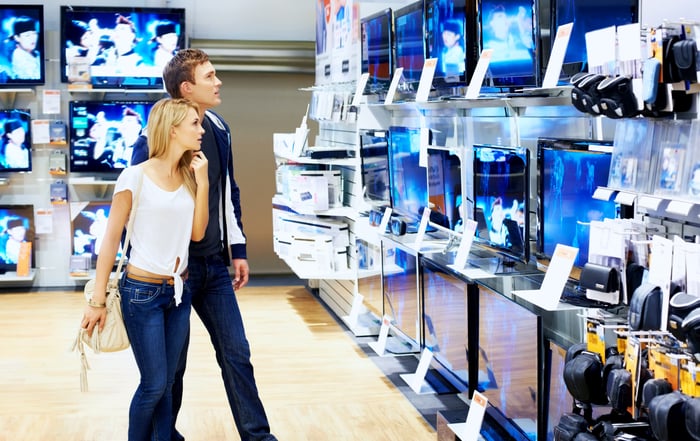 Best Buy raised its full-year guidance after its second-quarter report in August, although the trade war between the U.S. and China injected plenty of uncertainty. With the holiday season now in full swing, the company felt confident enough to boost its full-year outlook again after its third-quarter report.

Previously, it anticipated its adjusted operating margin being flat to slightly up from last year. Now the company expects a slight increase from that 4.6% rate. Non-GAAP EPS is now expected between $5.81 and $5.91, a meaningful increase from a previous range of $5.60 to $5.75.

For the fourth quarter, the company sees sales between $14.75 billion and $15.15 billion, comps growth between 0.5% and 3%, and non-GAAP EPS between $2.65 and $2.75. The wide range on the comps outlook likely reflects uncertainty related to tariffs.

Along with Walmart and Target, Best Buy is proving to be a big-box store that's resilient in a difficult operating environment. Next year could be a different story if the trade dispute isn't resolved soon, but for now, Best Buy is doing just fine.