Chances are, you know someone whose life has been affected by cancer, a disease that will kill more than 600,000 people in the United States this year. Guardant Health (NASDAQ:GH) is fighting back.

The company's blood tests are a much less intrusive method than traditional tissue biopsies that can require surgical procedures and costly hospital stays. After the cancerous cells or DNA fragments found in the blood are genetically analyzed, Guardant provides recommendations to oncologists who want to find the most specialized treatment possible for their patients. The company's work can make a difference for families facing the devastating effects of the disease.

Guardant also provides an opportunity for investors. Its stock price has doubled this year and has nearly tripled since the company started trading publicly on Oct. 4, 2018. 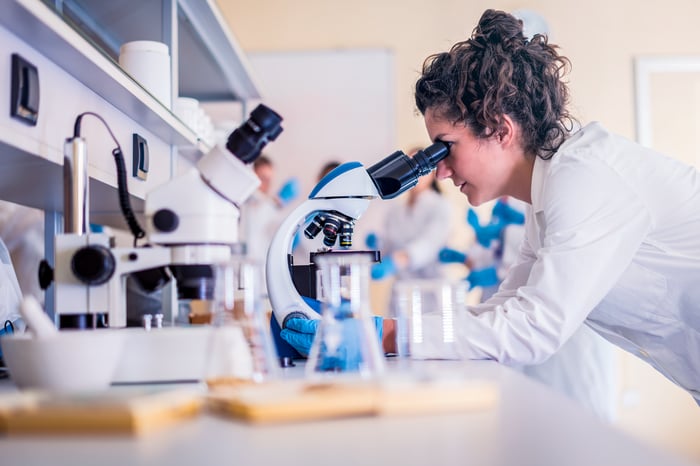 There are three great reasons to buy Guardant right now: the company is gaining momentum, it has more products in the pipeline that could open up much larger markets, and it's still a relatively small company, albeit a bit pricey.

Those numbers tell the story of a company with products that are quickly gaining acceptance, and it appears there's more to come.

Opening up newer and larger markets

Guardant360 and OMNI have a total addressable market of about $6 billion annually, according to the company. This year's $205 million in revenue is a tiny fraction of the market potential, and Guardant has plans to grow its current products and launch new ones.

Guardant announced in its third-quarter earnings call that it submitted Guardant360 for premarket approval from the U.S. Food and Drug Administration (FDA). Thus far, Guardant360 has been sold without FDA approval and falls into a category known as a laboratory-developed test. By gaining FDA approval, a process that management expects to last six months, Guardant could benefit in two ways.

First, FDA approval "will be an important catalyst for helping to establish a blood-first paradigm that will lead to continued clinical adoption of Guardant360," said Helmy Eltoukhy, Guardant's co-founder and CEO. Second, as Guardant360 gains FDA approval and broader acceptance, it increases the likelihood that more insurance payers will cover the costs of tests. That will encourage even more doctors and patients to use them.

While Guardant360 and OMNI have significant growth prospects, the company has a much larger market opportunity with its LUNAR programs.

LUNAR-1 aims to detect residual disease or recurrence in cancer survivors. The company estimates a potential $15 billion addressable market for LUNAR-1. Clinical trials are underway as the product is available for research use only in patients. Guardant's LUNAR-2 program has an $18 billion addressable market and seeks to create a blood test that would provide early detection of cancer in high-risk but asymptomatic individuals. Part of LUNAR-2 will focus on colorectal cancer.

During the next two years, management said, Guardant will enroll about 10,000 people between the ages 45 and 84 at about 100 sites in the U.S. for its ECLIPSE study. If Guardant's liquid biopsies prove to be successful, it's not difficult to see the company expanding their use cases, which can lead to long-term growth opportunities. 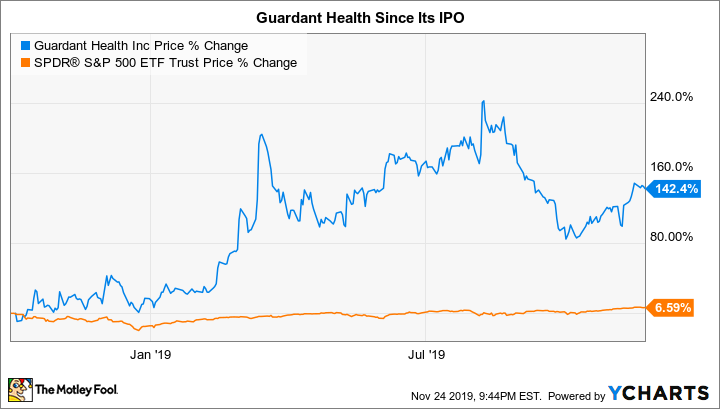 It's possible some investors could look at Guardant's stock chart and valuation and feel like this train has already left the station. After all, Guardant is up nearly 108% this year. Even with that rise, though, its market capitalization is only about $7 billion -- not a large number for a company with an addressable market currently estimated at about $40 billion but potentially much larger as blood testing for cancer gains traction.

The company's price-to-sales ratio is a lofty 40. Why so high? Guardant is growing sales extremely fast. It's started to narrow its losses, which shows it has a path to profitability. It also has a solid balance sheet, with more than $825 million in cash and marketable securities and no debt. Companies like that are often highly priced.

Wall Street analysts estimate the company will have revenue of about $267 million in 2020. At Guardant's current price, that's 27 times next year's sales, which is still a lofty valuation.

Guardant is not an investment for the faint of heart. It's a volatile stock, and if you're an investor who may be shaken by a sudden drop, this may not be the company for you.

Like most small, fast-growing healthcare companies, Guardant comes with risks. If a clinical trial fails, or the FDA doesn't grant approval, or a competitor launches a better product, Guardant's price would likely take a fast and steep fall.

If you keep a portion of your portfolio in high-risk, high-reward stocks, there are some great reasons to consider Guardant. It will require a long-term time horizon of at least three to five years to let the company's strategy play out.