Please ensure Javascript is enabled for purposes of website accessibility
Free Article Join Over 1 Million Premium Members And Get More In-Depth Stock Guidance and Research
By Mark Prvulovic - Nov 27, 2019 at 10:00AM

Why are analysts so bullish on this small-cap biotech stock, and are they justified?

Poring through the many small-cap biotechs out there, investors might have picked up on a company called Inovio Pharmaceuticals ( INO 1.69% ). With a market cap of just $260.5 million, this little biotech stock has lost around three-quarters of its market value over the past five years. However, out of the seven or so Wall Street analysts covering the stock right now, all of them have buy ratings on Inovio, with an average price target of $8.71. This would suggest an impressive 335% upside, but is this really justified?

Despite the stock's poor historic performance, analysts seem to be quite optimistic about Inovio's portfolio of drug candidates, most of which are currently in phase 2 clinical trials. Let's take a closer look at Inovio's drug pipeline, its financial position, and whether you should consider adding Inovio to your portfolio. 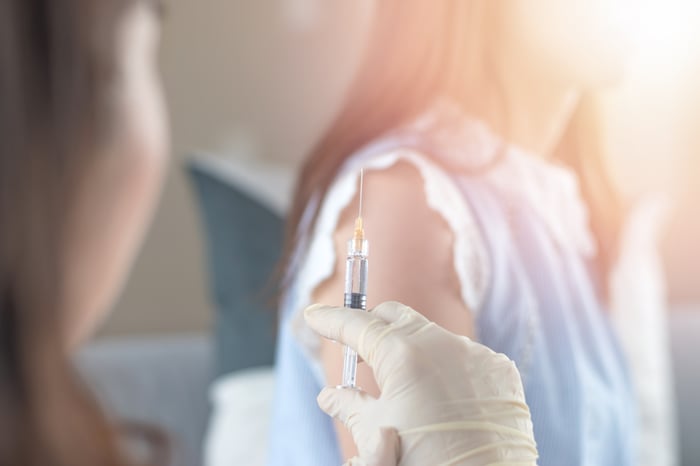 Inovio has four drugs in development, but its most promising candidate is VGX-3100, a DNA vaccine that stimulates a patient's immune system to better target and eliminate malignant cells. Specifically, VGX-3100 helps target pre-cancerous cells, or lesions, caused by certain strains of the human papillomavirus (HPV), HPV-16 and HPV-18.

Considering that there aren't many noninvasive treatments out there for patients at risk of developing full-blown cervical cancer, VGX-3100 could become one of the first nonsurgical treatments to help high-risk patients. At present, the main treatments for patients in this category include freezing abnormal cells via cryotherapy, laser therapy, using an electrical current to burn off abnormal cells, or invasive surgery.

While investors will have to wait until Q4 2020 before finding how these phase 3 results turn out, an earlier phase 2 trial for VGX-3100 targeting cervical lesions saw some impressive results. Out of 107 women who had taken VGX-3100, 49.5% had seen a significant reduction in virus-caused lesions. In comparison, only 11 of the 36 women in the placebo group -- 30.6% -- experienced a reduction in these same lesions.

Unlike VGX-3100, Inovio's remaining drug candidates all have backing from major pharmaceutical companies or institutions. INO-5401, a drug that targets a rare form of brain cancer called glioblastoma, is currently in a phase 2 trial and is jointly sponsored by Regeneron Pharmaceuticals. While glioblastoma is quite rare and represents a modest global market in comparison to other types of cancer -- it's estimated to reach just $1.65 billion by 2025 -- INO-5401 could still be a major source of revenue for Inovio should it prove successful.

INO-5151 is Inovio's prostate cancer drug that's currently undergoing a phase 2 trial, backed by a number of research groups such as the Cancer Research Institute and the Parker Institute for Cancer Immunotherapy. Inovio's last drug candidate, MEDI-457, is in a phase 2 trial to treat head and neck cancer and is being tested alongside AstraZeneca's own immunotherapy drug Imfinzo. Should MEDI-457 become successful, AstraZeneca would pay up to $700 million in milestone payments, as well as significant royalties on future sales. Understandably, many investors are excited about how lucrative this partnership could become, but MEDI-457 still needs to prove itself in its phase 2 and subsequent phase 3 trials, something that's far from certain at this point.

Inovio is still a very early stage biotech company with little to no sales to speak of. In its recent Q3 2019 financial results, Inovio reported only $867,000 in revenue in comparison to the $2 million reported in Q3 2018. Operating expenses have decreased from $28.6 million in Q3 2018 to $24.8 million in the most recent period, while Inovio's net loss for the quarter has gone down from $25 million to $23.1 million over the same time frame.

Perhaps the most important thing for a company like Inovio, however, is its cash balance and how long the company can fund itself before it needs to raise more capital. With just $93.8 million in cash and cash equivalents, Inovio has four quarters of financial breathing room. With VGX-3100 still quite a ways from completing its phase 3 trials, let alone trying to seek U.S. Food and Drug Administration (FDA) approval, it's virtually guaranteed that Inovio will need to seek more funding in the future.

Inovio definitely has some promising drug candidates. However, for most of its 21-year history, Inovio has majorly underperformed the market. Since 2005, the company's stock has failed to trade any higher than $14 per share, and in multiple instances, it fell so low as to verge on penny stock status.

At the same time, there's still a degree of uncertainty surrounding its drug candidates. With not a single treatment having passed the crucial phase 3 milestone yet, investors should remain cautious until Inovio can provide further data confirming its initial trial results.

Right now, I'd consider Inovio far too risky to buy, especially since there are better small-cap biotech stocks worth considering. However, once the company's phase 3 trial results come out in 2020, investors should reconsider whether to buy or pass on Inovio Pharmaceuticals.