The Wednesday before Thanksgiving is often a quiet day on Wall Street, and this year was no exception. Trading volume was muted compared to typical levels, with many investors sitting the holiday-shortened week out. A lack of huge market-moving news kept major benchmarks to modest gains. However, there was no shortage of companies seeing good news lift their share prices. Box (NYSE:BOX), AVX (NYSE:AVX), and Manchester United (NYSE:MANU) were among the top performers. Here's why they did so well.

Shares of Box rose more than 11% after the enterprise software specialist reported its third-quarter financial results. Revenue rose 14% from the year-earlier quarter, and adjusted losses narrowed to just $0.01 per share. The company announced some high-profile business wins with clients, including Impossible Foods, Los Angeles World Airports, and the National Hockey League, and Box also gave upbeat guidance for the fourth quarter. CEO Aaron Levie was excited about the company having more than 1,000 customers doing at least $100,000 in business, and Box is optimistic that the continued popularity of cloud computing will prompt more enterprise clients to turn to it for useful solutions. 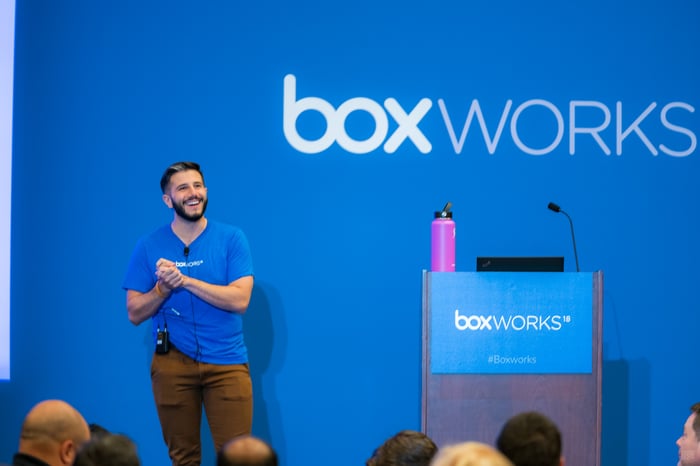 Kyocera wants the rest of AVX

AVX saw its stock soar over 36% following news on the merger and acquisition front. Kyocera already owns more than 70% of AVX, but the Japanese conglomerate now wants to take full control of the electronic components manufacturer. Under the terms of the deal, Kyocera would pay $19.50 per share for the remaining AVX stock it doesn't already own. Yet some investors believe that Kyocera should have to pay more than that in order to have 100% ownership of AVX. If the stock price remains above the $19.50 mark for a while, it would signal that investors want a higher bid from Kyocera in order to get the deal done.

Another win for Manchester United

Finally, shares of Manchester United climbed 11%. The English Premier League team's crosstown rival, Manchester City, agreed to sell a stake of roughly 10.4% to private equity company Silver Lake. The price tag was $500 million, implying an overall value for the team of $4.8 billion. That's up considerably from a roughly $3 billion valuation four years ago based on a previous investment, showing the worldwide appeal of Premier League soccer. Manchester United has gone through tough times lately from a competitive standpoint, but the team still brings in huge amounts of revenue, and many investors hope that the team will regain the former glory that brought it 13 Premier League titles between 1993 and 2013.