Comparing Square (NYSE:SQ) and American Express (NYSE:AXP) means comparing a payment processing upstart against one of the stalwarts. There are a lot of commonalities, but also many differences.

Square is one of the fastest-growing companies in mobile payments, while American Express continues to be a steady performer in the credit card business. Both are growing, but which is the better investment today?

Square recovers after a rough year

But the stock has rebounded, helped by strong third-quarter earnings posted Nov. 6.

Square's growth, especially in its Square Cash consumer app, helped adjusted EPS jump to $0.25 on revenue of $602 million. Analysts expected EPS of $0.20 on revenue of $596.4 million. 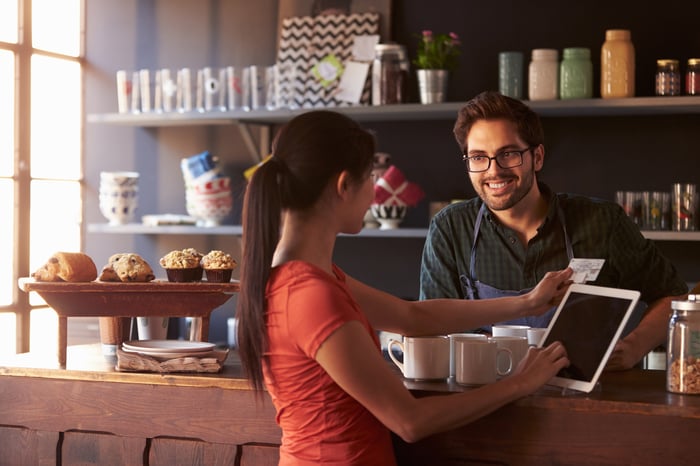 Square is one of the most disruptive companies in the world. It allows anyone to turn their mobile devices into portable cash registers. And adding Square Capital, Instant Deposit, and Square Cash App builds out a profitable ecosystem of software complementing the core noncash payment process.

Revenue and margins have been increasing steadily. If this growth persists, Square stock's bad year will be firmly in the rearview mirror.

American Express looks to grow in the loan business

American Express published third-quarter results on Oct. 15 and reported EPS growth. But there are signs of deceleration and increased risks.

The company is well established in the United States and is very profitable. Third-quarter results showed EPS growth of more than 10%, but growth in billed business and loans decelerated to a lower level than in 2018, and also shows more signs of deceleration than Visa (NYSE:V) or Mastercard (NYSE:MA). In the second-quarter 2019, EPS growth for American Express was higher, coming in at 12.7%.

Amex relies heavily on co-branding for volume, which is potentially a risk. However, the contract renewal earlier this year with Delta Air Lines, its largest partnership, significantly reduced co-branding risk.

The company offers rewards to attract and retain card members, but competition with large banks in this area has pressured profit margins. The "engagement" costs of rewards, plus marketing and services, has grown faster than revenue, which grew 8.3% year over year, while expenses grew 8.8%.

The pattern of increasing engagement costs has persisted since 2016, and management expects it will continue.

American Express sees opportunity in growing its loan business and is committing resources to it. It's expensive to do so, and exposes American Express to higher credit losses in an economic downturn.

Over the long term, it has opportunities internationally, as it is not widely accepted outside the U.S. For the time being, however, the company is focusing on building U.S. business in loans and fee-based consumer services.

These companies have very different business models, though both operate in the payment processing space. American Express is a mature company, while Square is in a completely different stage of growth.

But one is a better investment today than the other. Square's shares have been halved in the past year as the company worked through issues. Amex is a steady performer facing structural issues in the form of increasing customer engagement costs and loan business risks.

From an investment point of view, I see Square as the better choice. Although it doesn't pay a dividend like American Express does, the numbers prove management has done a good job dealing with recent challenges and setting up potentially big returns.

Building out a profitable ecosystem of software complementing the core noncash payment process will power the company -- and the stock price -- higher at a faster pace than Amex can offer.

American Express is showing rising expenses and slowing growth, and has more risks connected with the health of the U.S. economy. I expect it will continue to grow, but at a slower pace.