Dollar Tree (NASDAQ:DLTR) got the solid performance out of its Family Dollar business it was looking for. Same-store sales rose 2.3% in the quarter, the fourth straight quarter they've been positive after the segment was almost placed on the chopping block.

Yet management's confidence in the deep discounter might not be enough to overcome the effect of pending tariffs. If imposed as scheduled, they could damage earnings in the fourth quarter and swipe as much as $0.06 per share from fourth quarter earnings. Dollar Tree narrowed its sales outlook for the year but once again lowered its profit forecast. 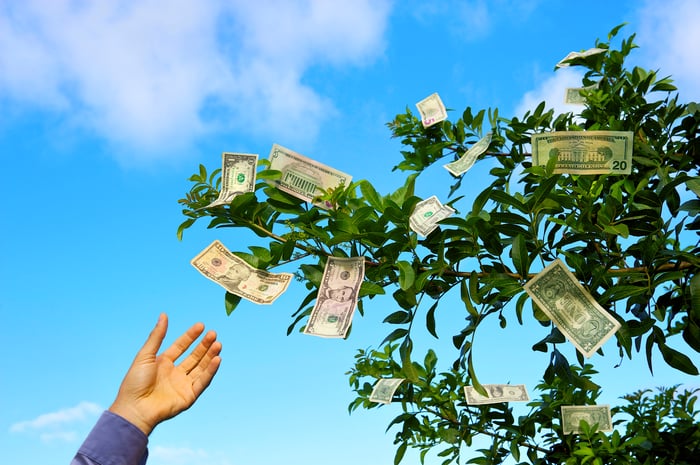 A show of strength

Family Dollar came through once again despite net sales falling by $13 million to $2.67 billion. Dollar Tree has previously said store remodeling and closures of underperforming locations would impact sales, so the decline is not surprising, particularly as comparable sales rose yet again at the remaining locations.

Dollar Tree had also noted the remodeled stores generate far greater comps than those that remain in their original format, rising in the double-digit range. It completed another 247 remodels during the third quarter, and an additional 39 stores were rebannered as Dollar Tree. To date, it has completed more than 1,150 remodels and rebannered more than 200 locations. Because the changes are so successful, Dollar Tree will be remodeling another 1,000 sites in 2020.

Still, Family Dollar's gross profit and operating profit fell during the quarter, which was driven by the chain selling more consumable merchandise. While such products do carry lower profits, they also drive more traffic, and that seems to be borne out by the increase in comps Family Dollar is enjoying.

Costs are weighing on operations

Both chains, though, were also hurt by higher freight and transportation costs, expenses that have plagued the retailer -- and most retailers -- for the past year. Other costs that impacted the company were the consolidation of its two distribution centers into one, the costs associated with closing stores, and slightly higher depreciation expense, but those were partially offset by lower payroll and benefits expenses.

The Dollar Tree chain also performed well in the quarter, with net sales rising by $220 million, or 7.7%, to $3.07 billion. Comps rose 2.8%, the 47th straight quarter of rising comps, or almost 12 consecutive years' worth.

Yet the gains might be undone if proposed tariffs go through. Last quarter, Dollar Tree didn't include any impact from the tariffs when it provided its guidance for the year, as events unfolded just before the earnings release. But now it has had a chance to consider their impact, and it could be substantial.

Dollar Tree estimates so-called Section 301 tariffs will increase its cost of goods sold by about $19 million, or $0.06 per share, in the fourth quarter if they are fully implemented. It forecasts net sales will be in a range from $6.33 billion to $6.44 billion, with comps rising by low single digits. Earnings for the quarter, including tariffs, are forecast to be in the range of $1.70 to $1.80 per share.

For all of fiscal 2019, Dollar Tree now says it is anticipating net sales to be between $23.62 billion and $23.74 billion, which raises the lower end of its previous guidance from $23.57 billion but lowers the top end from $23.79 billion. It's the third straight quarter Dollar Tree has narrowed its outlook.

Yet other costs impacting earnings include all those consumable sales that are rising faster than expected, which isn't necessarily a bad thing, along with payroll cost pressure at its distribution center, repairs, maintenance, utilities, and depreciation.

The retailer, however, is on a much firmer financial footing than it was a year ago, even with the threat of higher tariff expenses hanging over it, and its Family Dollar chain is finally back on track after five years of dragging down Dollar Tree's operations.

Even if tariffs sap its strength next quarter -- and with on-again, off-again progress on the trade front -- Dollar Tree seems poised for a strong 2020 and beyond.