My brokerage account had some spare funds sitting around in the spring of 2017, so I made a short list of seven interesting tickers where those assets might do some good. After some further research, I elected to start a position in NeoPhotonics.

Nearly three years later, I stumbled across that list again. The results in my original seven-ticker group were all over the place, but one of them soared well above the rest with a 130% return. That's what it took to remind me of engineering simulation specialist Ansys (NASDAQ:ANSS).

For those keeping score at home, the S&P 500 had gained 32% over the same period while my hapless maker of optoelectronic components took a 7% haircut instead. This discovery made me curious about two things:

What was so special about Ansys in early 2017?

Ansys entered 2017 with a stable but quite unremarkable wind in its sails. Revenue had grown at an average annual clip of 7.4% over the preceding five years while adjusted earnings posted yearly gains of 9.3%. The stock rose 61% across the same five-year period, trailing behind the S&P 500's 78% increase.

All of that changed in a hurry. With the benefit of hindsight, the best marker for Ansys' soon-to-be-unleashed gains appears to be a surging order backlog. Keep in mind that we're talking about a software company here, not some asset-heavy manufacturing business. In other words, the order backlog has nothing to do with slow production lines. Instead, it's all about subscription fees to be collected in the future, tied to long-term contracts.

The company's total backlog rose by 78% year over year in the fourth quarter of 2016, accelerating to an 80% clip in the next quarterly report. The company was also bagging a much larger number of million-dollar contracts, paving the way toward stable relationships with enterprise-level clients. That was the latest news on the table when Ansys first caught my eye.

Those pent-up order reserves translated smoothly into surging revenue in the years that followed. Gross margin widened at the same time, helped by improving economies of scale. In the recently reported third quarter of 2019, Ansys posted 19% constant currency sales growth and record-high earnings of $1.42 per share.

With trailing gross margin of 89% and net margin just north of 30%, Ansys feeds those growing revenue streams into an efficient cash machine. Market interest in simulation tools is at an all-time high these days, and the market as a whole is expected to grow by 15% a year over the next five years. Ansys is an established leader in this space and likely to gain market share even as the total revenue pie expands.

I couldn't see all of that from the vantage point of 2017, but the healthy market plus surging order backlogs may have been all the clues I really needed. 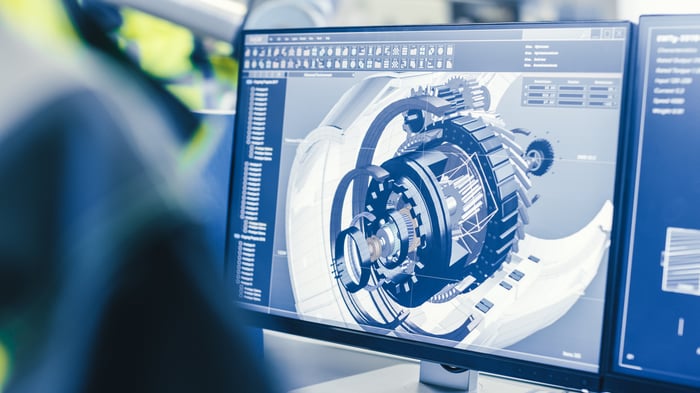 Did we miss the boat already?

I don't think so.

This company is powering through a sluggish global economy with double-digit revenue growth and expanding margins. Ansys serves as the name to beat in a fantastic target market, and I can't imagine a future where simulation software isn't enormously important. These products help other companies produce better products and more efficient business processes, with target markets ranging from defense and aerospace to healthcare systems and automotive manufacturers.

The stock isn't exactly cheap, trading at 49 times trailing earnings and 46 times free cash flow. On the other hand, you get what you pay for sometimes.