The stock market has performed well this year. For instance, the S&P 500's year-to-date return is more than 25%. However, some stocks have performed even better, one of which is MercadoLibre (NASDAQ:MELI). Shares of the Latin America-focused e-commerce giant are up nearly 100%, vastly outperforming the S&P 500.

Despite this impressive performance, there are several reasons to think the company can go much higher. Let's consider one of those reasons.

MercadoLibre is best known for its e-commerce platform, and with good reason: The company operates the largest such platform in South America. During the third quarter, MercadoLibre sold 98 million items, a 17.3% year-over-year increase, while its gross merchandise volume -- the total dollar amount of items sold on its platform -- was $3.6 billion, about 22 percentage points higher than the year-ago period. Furthermore, unique buyers and live listings both increased, by 25.7% and 44.5% respectively. 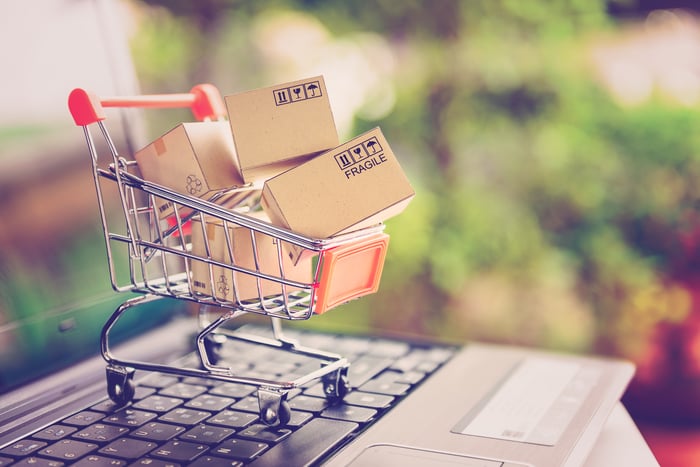 In other words, MercadoLibre is still growing in popularity and continues to attract more buyers and sellers to its platform. However, it would be a grave mistake to think of the company as a one-trick pony. MercadoLibre's venture into the fintech industry -- via its payment platform MercadoPago, which resembles PayPal (NASDAQ:PYPL) -- could be a major growth driver for the foreseeable future. During the company's third-quarter earnings conference call, CEO Pedro Arnt said:

During the quarter we reached an important historical milestone, as for the first time ever total payment volume away from MercadoLibre's marketplaces surpassed TPV on marketplaces during the full quarter, and did so not only on a consolidated basis, but also in our largest market, Brazil. As of this third quarter, two of our main countries are processing more payment volume away from our e-commerce platforms than on them, as Argentina and Brazil TPV off-marketplaces reached 63% and 52% of total TPV, respectively.

MercadoLibre hopes to achieve this same level of success in markets other than Brazil and Argentina. It is probably in pursuit of that goal (among others) that the company announced a secondary stock offering earlier this year, during which it raised about $1 billion. MercadoLibre also entered into an agreement with PayPal, with the latter company making a $750 million investment in the e-commerce giant. Given PayPal's strong position in the fintech industry, and MercadoLibre's ambitions within that industry, this partnership makes perfect sense: The two companies could combine in ways that could help both grow their respective businesses.

MercadoLibre may just be getting started

MercadoLibre is well-positioned to continue to profit from the growth of the e-commerce industry, and the company's fintech business (also part of a growing industry) is booming as well. Furthermore, the e-commerce giant is keeping its foot on the pedal; it plans to invest the proceeds from its secondary common stock offering into initiatives to solidify its leadership position in its market. For all these reasons, MercadoLibre likely isn't done beating the market, and it's still a solid growth stock worth investing in.