Major retailers from Walmart (NYSE:WMT) to Target (NYSE:TGT) to Costco (NASDAQ:COST) have been reporting head-turning growth in recent months, but BJ's Wholesale Club (NYSE:BJ) isn't participating in that surge. The regional warehouse retailer recently reported sluggish third-quarter results that stood out from rivals mainly because of the chain's slow sales rate.

In a conference call with analysts, CEO Christopher Baldwin and his team explained the biggest factors behind that poor market-share performance while adding detail to management's broader outlook. Let's look at a few highlights from that presentation. 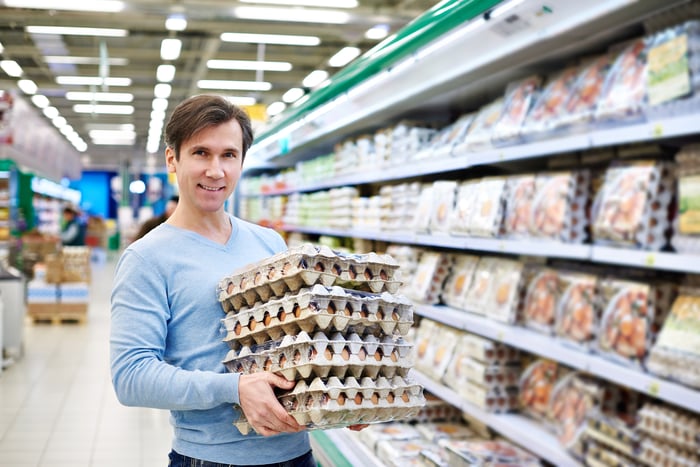 Our general merchandise business was impacted in the third quarter by changes we made in our TV assortment ahead of the holidays, as well as a shift in the timing of promotions. In addition, sales of seasonal apparel and other related items such as heaters slowed due to warmer than expected weather late in Q3. -- CFO Robert Eddy

BJ's 1.1% comps growth marked a deceleration compared to the prior quarter's 1.7% boost and fell below most investors' expectations. It also appeared weak when compared with national peers. Target expanded comps by 4.5% for the same period, Walmart grew at an over 3% rate, and Costco has been boosting sales by nearly 7% in recent months.

Management said part of the challenge came from planned adjustments in promotion spending and BJ's efforts to simplify and improve its product offerings in areas like consumer electronics. They stressed in the call that comps are up 1.5% through the first nine months of the fiscal year. Still, while other rivals are enjoying some of their best sales volumes gains in years, BJ's customer traffic was roughly flat this quarter.

Improving the membership base

Baldwin highlighted a few metrics that showed off BJ's stronger membership base. Subscription income hit a record thanks to a mix of new membership growth and a greater penetration of its higher tier subscriptions. The company's shift away from promoting trial memberships also led to an uptick in the percentage of paying members at its stores. Finally, the retailer is making headway in reaching out to younger demographics, many of whom purchase subscriptions online.

Executives are confident that these improvements will lift profits and customer traffic over time. However, they cautioned that these impacts often aren't obvious in the short term.

We have added an element of return to shareholders through our stock repurchases program. -- Eddy

Adjusted earnings are up 18% over the first three quarters of the year, and cash flow is strong. Management called these metrics a "testament to the strength of our underlying business model and our strategy."

The healthy profitability allowed BJ's to push its debt leverage down to 3 times adjusted annual earnings roughly six months ahead of their original plan. The company still has work to do to get that multiple down to between 2 and 2.5, but management is happy enough with the progress that they've added stock buybacks as a new cash return channel for shareholders.

Our priority remains to focus on growth and continue to drive strong traffic and sales trends. -- Eddy

BJ's updated outlook remains pressured by the company's major initiative aimed at reducing and optimizing its assortment levels so that it can more efficiently expand the business. That's especially true in the grocery area, where "we're disrupting just about everything we do in order to create a better long-term algorithm on [growth]."

Investors aren't likely to see big gains from this project in the holiday quarter, but they'll be expecting to see results in terms of faster sales growth and rising customer traffic in 2020.