Please ensure Javascript is enabled for purposes of website accessibility
Free Article Join Over 1 Million Premium Members And Get More In-Depth Stock Guidance and Research
By Beth McKenna - Dec 2, 2019 at 8:17AM

Looking for stocks for the long term? You might want to consider buying shares of this e-commerce king, innovative medical device company, and design software leader.

A decade from now, we'll be getting ready to turn our calendars to the year 2030 (or, perhaps, have a real-life version of the Jetsons' robot Rosie do it for us). And the news media will be spewing out articles looking back on the decade.

If you're reading a list of the best-performing stocks of the 2020s, there seems to be a good chance that these three stocks will be on it: online retail and technology titan Amazon.com ( AMZN -0.00% ), medical device maker ShockWave Medical ( SWAV 2.65% ), and design software leader Autodesk ( ADSK -0.15% ). 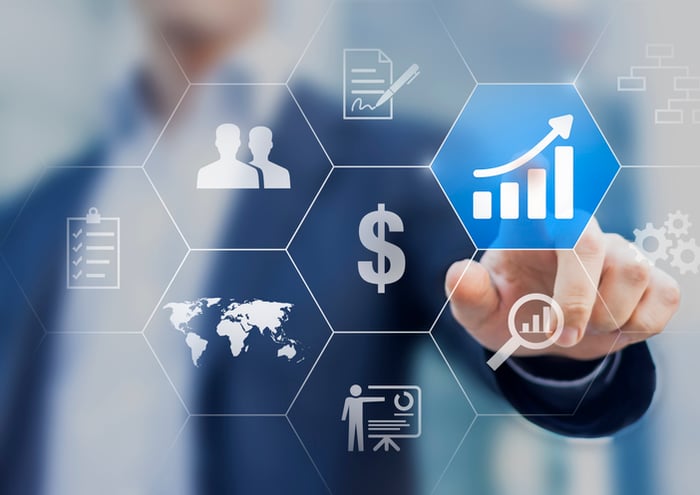 Amazon still has much growth potential in its existing businesses, and it will surely continue to enter new markets and industries, just as it recently pushed into the healthcare arena. Wall Street is modeling for average annual earnings growth of 72% over the next five years -- and I'm on board with this super-optimistic outlook.

In the third quarter, online retail sales accounted for "just" 11.2% of total U.S. retail sales, according to the U.S. Census Bureau. So, the largest e-retailer in the United States still has room to grow in this country. A similar dynamic exists on the global level, so its international business also has robust growth prospects.

Moreover, the cloud-computing service market -- which expanded 46% in 2018 -- is widely projected to post strong growth for years to come. And Amazon Web Services (AWS), the market leader, is poised to keep benefiting. AWS is powering the company's profit growth. In the first three quarters of 2019, it contributed 13% of Amazon's total revenue, yet an outsize 62% of its operating income, according to Amazon's third-quarter earnings report. In addition, the smart-home market is in its early days, so the company's business centered on its artificial-intelligence powered assistant Alexa has huge growth potential.

With a forward P/E of 66, Amazon stock seems pricey. But if we take the company's projected earnings growth into account, the stock is reasonably priced. Keep in mind that projected growth is just that: projected.

ShockWave might be a new name to many investors, since the medical device maker just went public in March. The company, which was founded in 2009, bills itself as "a pioneer in the development of Intravascular Lithotripsy (IVL) to treat complex calcified cardiovascular disease." Lithotripsy -- which uses sonic pressure waves -- has been applied for several decades to break up kidney stones, but using it to break up calcium deposits in arteries is novel.

The company has several catalysts for growth on the horizon: It aims to obtain U.S. approval for C2 in the first half of 2021; it recently began a CAD IV study of C2 in Japan; and it has a product in clinical development, TALV, for the treatment of calcific leaflets in heart valves. Management believes the company has a total addressable market of more than $6 billion.

Autodesk makes design and other software for the architecture, engineering, construction, manufacturing, entertainment and media, and other industries. The company, which was founded in 1982, is widely considered to have transformed the design industry when it brought its flagship product, AutoCAD, to the PC that same year. AutoCAD is a leading 2D and 3D computer-aided design (CAD) and drafting tool.

In 2016, Autodesk stock -- which had largely just been tracking the market over the long term -- began to take off because investors were enthused about the company's transitioning from a licensing to a cloud-based software-as-a-service business model. This transformation has begun to pay off, as evidenced by the company's robust recent quarterly earnings reports. Moreover, there are still many customers with perpetual licenses that Autodesk aims to convert to its subscription offerings, so this catalyst has a lot of juice left.

In the third-quarter results, reported last Tuesday, total revenue rose 28% year over year to $843 million, with recurring revenue representing 96% of the total. Annual recurring revenue increased 28% to $3.22 billion. Total billings surged 55% to $1.01 billion. EPS under generally accepted accounting principles (GAAP) came in at $0.30, compared with a loss per share of $0.11 in the year-ago period. Adjusted EPS soared 169% to $0.78, beating the $0.72 Wall Street was expecting.

Autodesk stock's forward P/E of 40.8 seems high. But if we take the company's projected earnings growth into account -- 80.9% annually over the next five years -- the stock is quite attractively priced. Of course, projected growth might not pan out. Then again, the company could also exceed earnings expectations. Indeed, it's done so in three of the last four quarters.