Please ensure Javascript is enabled for purposes of website accessibility
Free Article Join Over 1 Million Premium Members And Get More In-Depth Stock Guidance and Research
By Jennifer Saibil - Dec 2, 2019 at 9:05AM

A bright third quarter is bolstered by a better selection of off-price merchandise.

It turns out that despite the decline in retail sales, or maybe because of it, some companies might be gaining.

TJX Companies ( TJX 2.04% ), owner of T.J. Maxx, Marshalls, and Home Goods, is an off-price reseller that doesn't necessarily follow the same sales patterns as traditional retail channels. When economic times are good, customers spend more in retail. But when times are bad, people still need basic necessities, and they're more likely to shop at an off-price store.

In the current situation, retail is suffering for other reasons, including changing sales patterns, and off-price is flourishing.

These factors worked to help TJX toward a better-than-expected third quarter, with sales coming in above forecasts. Comps were up 4%, on top of 7% in the third quarter of 2019, net sales grew 6%, and diluted earnings per share were $0.68, up from $0.61 in the same quarter of 2019. 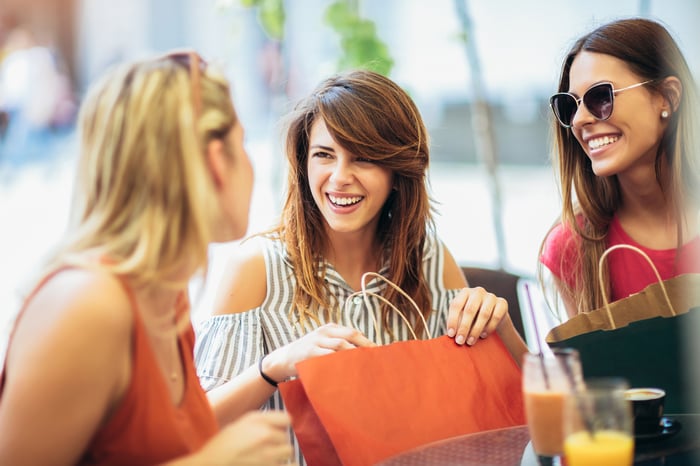 The third-quarter earnings report noted heavy foot traffic in store locations, which is an impressive feat considering most retail sales growth is moving online, and TJX has been cited as not going digital fast enough. This trend was found across all of the company's four divisions: Marmaxx (Marshall's and T.J. Maxx U.S. stores), Canada, HomeGoods, and International.

In addition to this, TJX has finally strengthened its web presence and saw double-digit sales growth from its online platform in fiscal 2019.

In an assertive statement, CEO Ernie Herman said, "We are confident that we can gain additional market share and continue the successful growth of TJX in the U.S. and internationally."

Furthering the increase in sales is a large amount of inventory flowing into the company's merchandise coffers because it's not getting sold in traditional stores. CEO Herman said, "We are seeing fantastic, widespread availability of quality, branded merchandise and are in a great position to capitalize on these opportunities."

For example, a company like Macy's ( M 2.58% ), which has seen declining sales, needs to get rid of merchandise that's not selling by way of an off-price buyer. (Macy's has been expanding its own off-price division, Backstage. TJX buys those overstocks from various sellers, and sells at a discount, bringing in customers who are looking for a better deal. TJX has vendor agreements with many full-price retailers that it keeps discreet.

Other sources of inventory are manufacturer overruns, order cancellations, and direct-order merchandise.

This is how Macy's revenue over the last five years, around the beginning of the retail shift, has compared with that of TJX: 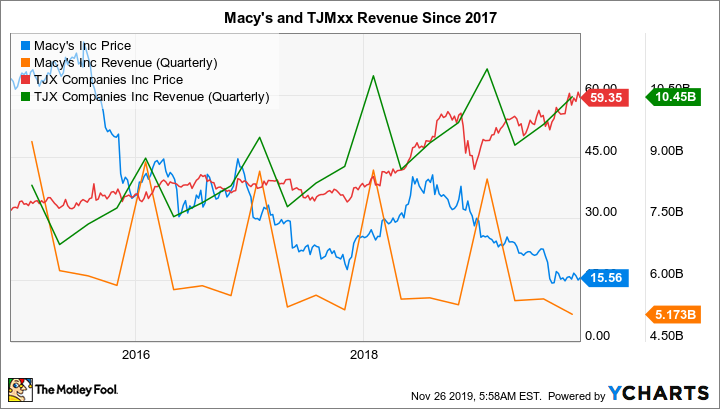 Macy's and TJMaxx data by YCharts.

While Macy's started out five years ago ahead of TJX, it has since declined as the off-price competitor has continued increasing in sales.

The company calls this "opportunistic buying," which is taking advantage of the opportunities in overstock retail as they come up and quickly identifying the what and where of selling it.

The company cites its "extremely flexible business model" as a key to its success. Not only are customers always up for a value experience, but they are particularly keen when the rest of the retail market is in flux. The company's core mix of brands, fashion, price, and quality delivers this value. This allows TJX to thrive under challenging economic conditions in the broad market, including succeeding during a recession.

As the largest off-price chain in the world, it also has a well-managed inventory system that makes it easy for regular-price retail stores to unload merchandise. It then brings the right products to the right stores within a time frame that is still relevant for shoppers.

Delighted investors pushed the share price higher after the third-quarter earnings release, and the future is looking rosy for the company.

Is TJX Companies a Buy After a Strong Q3 Report?

Why The TJX Companies Stock Jumped 10% at the Open Today