Shares of exploration and production company Apache (NASDAQ:APA) are down 13.1% as of 11:30 a.m. EST today. Today's move comes after the company issued an update on one of its major drilling projects that was lacking the results investors were hoping or.

Apache's management has been touting two major oil production projects that were supposed to be game changers for the company: the Alpine High discovery in the Permian Basin and an offshore drilling block in Suriname. Both had a lot of hype around them because so many other oil and gas producers have had success in similar areas. The prolific results from the Permian Basin are well documented, and ExxonMobil has had incredible success in offshore blocks in neighboring Guyana. 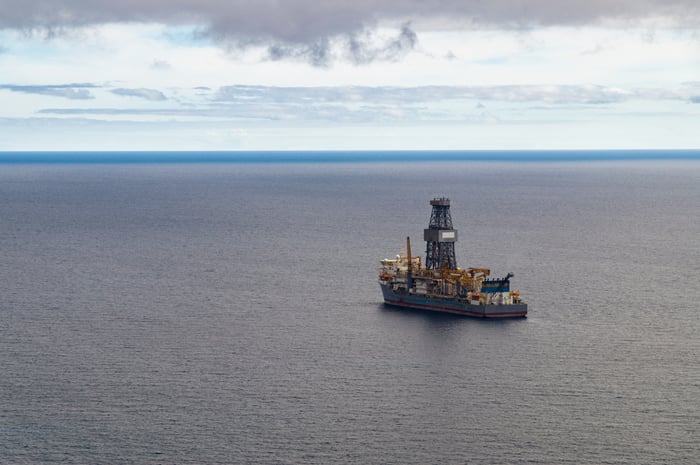 Unfortunately, Apache's endeavors have not been as productive as hoped. Alpine High -- touted for oil production -- has mostly been producing much cheaper natural gas liquids, and results so far in Suriname have not been similar to those of other finds in the region.

So the hope going into today's update was that the company had struck oil, but it hasn't. According to the press release, the company drilled down, did some tests, and will start drilling lower. While it didn't explicitly say that the hole was dry, the lack of announcement of some hydrocarbon formation was discouraging enough for investors to abandon ship.

Apache made some daring moves over the past few years to unload much of its international production portfolio to focus on North American shale and some choice offshore projects. Considering the results at Alpine High and Suriname thus far, that gamble isn't paying off.

It's hard enough for an oil and gas production company to get by these days even when everything is going right. With the additional news that some of these bets aren't working, it's getting harder and harder to see what the upside for Apache is absent a significant uptick in oil prices. Considering no one knows when that will happen, it's best to just stay away from Apache.