Please ensure Javascript is enabled for purposes of website accessibility
Free Article Join Over 1 Million Premium Members And Get More In-Depth Stock Guidance and Research
By Keith Speights - Dec 3, 2019 at 7:00AM

But the big Canadian cannabis producer has a safety net that most of its rivals don't.

You'll have to go back to the third quarter of fiscal year 2019, which ended on Dec. 31, 2018, to find a quarterly profit for Canopy Growth ( CGC 1.41% ). And that profit came with a big asterisk: Canopy's positive earnings of $74.9 million Canadian stemmed entirely from the drop in the fair value of the company's senior convertible notes because its stock sank during the quarter.

CEO Mark Zekulin said in Canopy's fiscal 2020 Q1 conference call in August that the company was "committed to its Canadian business delivering positive adjusted EBITDA [earnings before interest, taxes, depreciation, and amortization] on a quarterly basis within fiscal 2021." He also stated that Canopy plans to have "a sustainable, high-margin, profitable Canadian business."

But Zekulin didn't talk about profitability in Canopy's most recent quarterly update, as the company posted a net loss of nearly CA$375 million. Don't expect him to speak much about it in the near future, either. Here are three reasons Canopy Growth won't be profitable anytime soon. 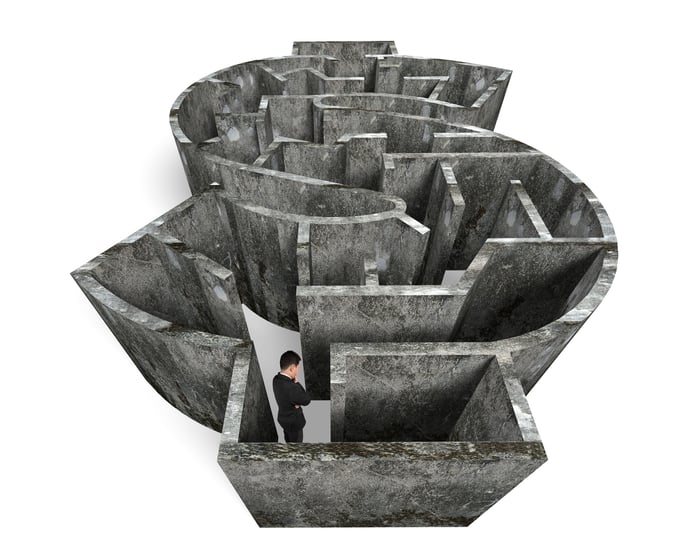 When asked about Canopy Growth's enormous share-based compensation expense in June, then-CEO Bruce Linton said people should think it was "awesome." But Linton was shown the door soon afterward, and when it comes to achieving profitability, the company's stock rewards for employees are more awful than awesome.

More than 31% of Canopy's operating loss in its latest quarter stemmed from share-based compensation totaling CA$83.8 million. The company even spent more on rewarding its employees with stock than it generated in net revenue during the second quarter.

CFO Mike Lee stated in Canopy's Q2 conference call that "management has restructured its share-based compensation program and will lead to reduced expenses and share-based compensation in the upcoming fiscal year." He didn't provide any details, though, about just how much those expenses will be cut and quickly moved to the next topic. Look for this cost to continue as a major obstacle to Canopy's achieving profitability.

Note the wording used anytime Canopy Growth's executives talk about profitability and positive adjusted EBITDA. They always qualify their comments as stating that the Canadian business will hit those goals. Why not commit to making the company itself profitable? Zekulin and the rest of Canopy's management team know that there's a lot more investment required for international expansion that will probably delay any hopes of a positive number at the bottom line.

Lee noted in the company's Q2 call that "the U.S. continues to be our No. 1 investment for operating expenses." Canopy Growth has already assembled a U.S. team of close to 100 people. The company will keep pouring money into its U.S. hemp operations at least over the next 12 to 18 months in anticipation of growth in the U.S. CBD market.

Then there are the big potential expenses related to Acreage Holdings. Canopy paid $300 million up front for the option to acquire the U.S.-based cannabis operator. The full price tag of the deal is $3.4 billion, but the transaction will be completed only if federal laws change in the U.S. to allow the legal sale of marijuana. Although Canopy will use stock to complete the acquisition, the company will almost certainly have other expenses if the deal eventually goes through.

So far, we've only talked about Canopy Growth's expenses as presenting problems for achieving profitability. However, revenue could be a big factor as well -- in particular, the uncertainty of Canopy's future revenue growth.

The biggest factor behind Canopy's lackluster revenue in Q2 was the lacking retail infrastructure in Canada. This situation is likely to improve, but there's a huge question mark over whether it will improve as rapidly as Canopy thinks it will. The company is projecting 40 new retail cannabis stores opening monthly in Ontario beginning in January 2020. That's optimistic, to say the least.

It also remains to be seen if Canopy's big bet on cannabis-infused beverages will pay off. The company's strategy is to disrupt the beverage alcohol market in Canada with its new CBD and THC beverages. But creating an entirely new market is easier said than done.

Should investors be worried about the company's murky path to profitability? For most marijuana stocks, the answer would be a resounding "yes." However, Canopy Growth has a safety net that most of its peers don't: its partnership with Constellation Brands ( STZ 0.22% ).

Canopy had CA$2.7 billion in cash, cash equivalents, and marketable securities on hand as of Sept. 30, thanks to its big influx of cash from Constellation. That's enough to carry the company well into the future even at its current breakneck level of spending. Canopy will also benefit from its relationship with Constellation as it moves into the U.S. market, for example, using the big beverage alcohol company's distribution network.

Expect Constellation to keep the heat on Canopy to get its spending under control as well. Canopy's next CEO (a search is under way) will almost certainly be someone Constellation thinks can guide the company on a path to profitability. While Canopy won't be profitable anytime soon, it will probably be profitable more quickly than it otherwise would have been because of the influence of Constellation Brands.