Please ensure Javascript is enabled for purposes of website accessibility
Free Article Join Over 1 Million Premium Members And Get More In-Depth Stock Guidance and Research
By Rich Duprey - Dec 3, 2019 at 8:00AM

There's gambling, and then there are these businesses with solid prospects you can invest in.

There's a certain excitement to buying penny stocks and being able to control a large number of shares with comparatively little cash outlay. Even small movements in the share price can generate substantial returns.

But penny stocks rarely give investors such opportunities, and most turn into black holes sucking away your entire investment. Buying penny stocks often amounts to tossing the dice hoping you strike it rich. A better strategy is to focus on companies with real potential for growth and profits, which makes the three businesses below much better investments. 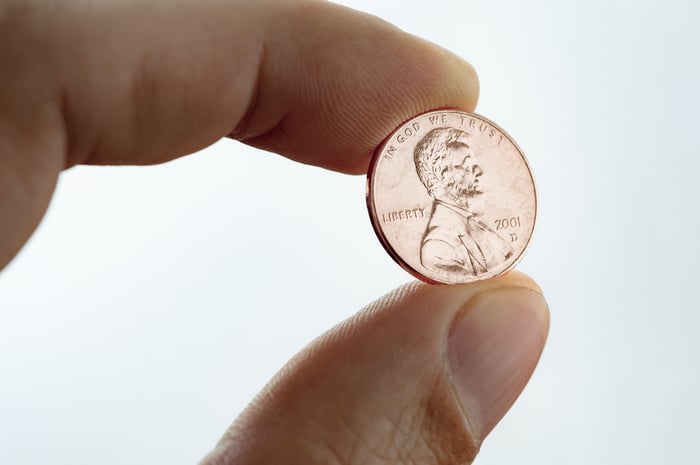 The profit that Arrowhead Pharmaceuticals ( ARWR -3.14% ) reported in its third-quarter earnings was based solely on collaboration payments from Johnson & Johnson's ( JNJ 1.46% ) Janssen subsidiary and not because it was selling a product -- it actually has no products on the market because it is a pre-commercial biotech. So, less sophisticated investors might be tempted to equate it to one of those penny stocks riding on a good story. But they would be mistaken.

Arrowhead has several drugs in its pipeline showing promise in studies, particularly for hepatitis B. Admittedly, these are still very early in the process, but it suggests the investments Janssen made in the biotech have not been wasted.

Arrowhead's stock has soared to the stratosphere this year on the repeated promising results of its treatments, and shares stand more than 450% above where they started the year. It wouldn't be surprising to see the biotech use the gains to issue more stock to add cash to its balance sheet, a smart move for the company, though it could be dilutive to investors.

But that's only a short-term issue since it helps finance future experiments and ensures that the company has plenty of money on hand to pay its bills without interruption. Arrowhead is a stock worth investigating further.

The buzz is growing

Unlike the biotech, Innovative Industrial Properties ( IIPR -1.31% ) is reporting real profits for investors, generating earnings of $0.55 per share last quarter, well ahead of analyst expectations. What's unique about Innovative Industrial Properties is that it is a pot stock that pays a dividend, though shares haven't quite been able to buck the bubble bursting across most of the cannabis industry. The stock is down 45% from its 52-week high, though it still trades 70% higher than where it ended 2018.

Better for investors is that Innovative Industrial is also structured as a real estate investment trust (REIT), so almost all its profits are being returned to shareholders in exchange for preferential tax treatment.

The REIT had some 41 properties in its portfolio across 13 states, with its invested capital in them yielding 13.8% on average.

For investors, that means a dividend of $3.12 per share yielding almost 4.1% annually, or over twice the rate of the S&P 500 market index.

Building out its portfolio costs quite a bit of money. And there is the possibility Congress undercuts its investments by allowing banks and other financial institutions to lend money to cannabis companies, meaning the pot stocks might choose other financing avenues rather than renting from Innovative Industrial Properties. Nonetheless, this still looks like one marijuana stock investors might want to bank on.

A big bet on Latin America

Latin American online marketplace leader MercadoLibre ( MELI -6.75% ) recently reported earnings that were worse than expected, but it was because of higher marketing expenses. Management, however, said this was a one-quarter event and wouldn't recur. It also suffered from worsening quality in its credit business in Brazil, but its digital wallet and payments operation Mercado Pago looks ready to shine, particularly in Argentina.

MercadoLibre told analysts Argentina continued to see positive results, with higher frequency of payment in its wallet business, reaching almost 11 payments per unique payer, as well as doubling the amount of QR code payers and QR code collectors versus the prior quarter. It now has 2 million QR payers and almost 1 million QR collectors. QR payments in Argentina already represent over 50% of wallet total payment volume for the quarter.

This is significant because MercadoLibre's QR code payment system that launched in stores last year lets customers scan and pay merchants seamlessly through the Mercado Pago app. Analysts believe MercadoLibre can raise its discounted rates on the fintech app and still be very competitive, which gives it an additional powerful profit driver beyond its leading online marketplace.

MercadoLibre's stock has doubled over the past year, and it looks like there is more where that came from. That makes it undoubtedly a better bet than any penny stock.

3 Top Stocks to Buy in November and Hold Forever

3 No-Brainer Stocks to Buy in October

Thinking About Joining the Dogecoin Craze? Here are 2 Smarter Buys

My 3 Highest-Conviction Stocks This Summer