Shares of Arrowhead Pharmaceuticals (NASDAQ:ARWR) gained as much as 14.4% today after the company announced a public stock offering. It seems counterintuitive, but investors appear to be excited about a snippet of text listing possible uses for the proceeds.

The company made the standard explanation that the cash will be used for general corporate expenses, to fund maturing clinical trials, and the like. But Arrowhead Pharmaceuticals also included a nonstandard detail in the press release for the public offering: "A portion of the net proceeds may also be used for the acquisition of complementary businesses, products and technologies, or for other strategic purposes."

Investors may be getting a little ahead of themselves here, but if Arrowhead Pharmaceuticals pulls the trigger on any strategic investment, then it's likely to be in one (relatively boring) category in particular. 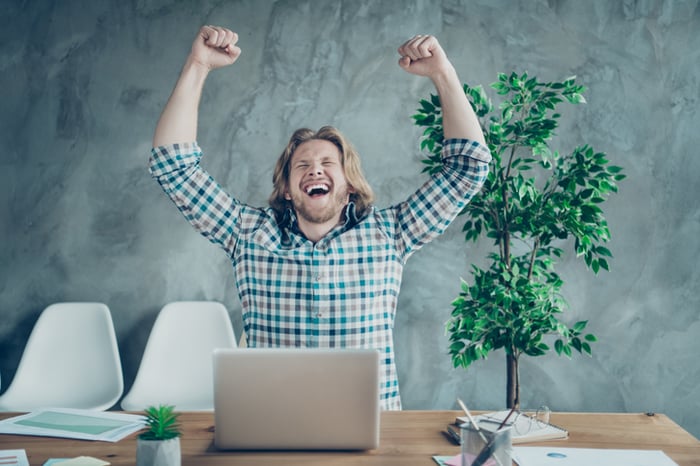 The developer of precision genetic medicines based on RNA interference (RNAi), a technique used to silence disease-driving genes, ended September with $221.8 million in cash and another $37 million in short-term investments. The proposed public offering of up to 4.6 million shares hasn't been priced yet; that information should be announced after market close today. But assuming an offering price of $60 per share, the business would raise up to $275 million in gross proceeds -- not a bad haul.

What could the cash be used for? Well, Arrowhead Pharmaceuticals decided to account for a $252.6 million up-front payment and equity investment, received from Johnson & Johnson subsidiary Janssen in late 2018, using the proportional accounting method. That allowed the business to count chunks of that total each quarter during its fiscal 2019, which resulted in full-year 2019 operating income of $61 million. It reported an operating loss of $55.9 million in fiscal 2018.

The proportional-accounting-method well will run dry in 2020, as there was just $77.8 million remaining against the up-front payment total at the end of September (the end of its fiscal year). In other words, the business is likely to report operating losses again in the near future.

What about a strategic investment, as hinted at in the press release for the public offering? That could happen, too. It may be a little less exciting than investors are imagining, however, because it's likely to be in drug manufacturing.

Arrowhead Pharmaceuticals spent $22 million on drug manufacturing in fiscal 2019, making it the single largest expense in the research and development category -- even more expensive than running clinical trials. The RNAi company has relatively strict manufacturing requirements, and the expense is starting to grow at a significant rate, so it may make sense to bring some of that expertise in-house with its own facility. Others in the precision-medicine space have done the same to reduce costs and operational risks. In fact, there's a manufacturing arms race in gene therapy right now.

The company is wisely taking advantage of a soaring stock price to pad its balance sheet. It will certainly need the cash to develop a maturing pipeline, and to fund operations once a lucrative collaboration revenue stream runs dry in 2020.

Whether Arrowhead Pharmaceuticals makes an acquisition of new technology or boring old manufacturing assets (or none at all), the company is correctly focused on the long term. That said, the company does appear to be a little expensive right now.