Please ensure Javascript is enabled for purposes of website accessibility
Free Article Join Over 1 Million Premium Members And Get More In-Depth Stock Guidance and Research
By Prosper Junior Bakiny - Dec 3, 2019 at 10:48AM

Merck's key growth driver may just be getting started.

Merck ( MRK -0.63% ) has performed well on the stock market this year. Since early January, the company's shares are up by about 15%, which compares favorably to the return provided by the pharmaceutical industry -- as measured by the SPDR S&P Pharmaceuticals Index -- which is up 10% year to date. The main reason behind Merck's performance has been none other than its blockbuster cancer medicine Keytruda. The company's top-selling product continues to spearhead its top-line growth, but there's something investors should appreciate: Merck's revenue isn't too reliant on Keytruda.

Keytruda will likely see even better days ahead

Merck released its third-quarter earnings report on Oct. 29. The company's sales were $12.4 billion, a 15% year-over-year increase, and Merck's non-GAAP earnings per share (EPS) improved by 27%. Most importantly, though, were the results from its oncology segment led by Keytruda. Sales of the cancer medicine were $3.1 billion, a 62% increase compared to the year-ago period. During the quarter, Keytruda made up about 25% of Merck's sales. It isn't unheard of for pharma companies to be much more reliant on their top-selling products than that. For example, AbbVie's Humira was responsible for about 58% of the company's sales during the third quarter. 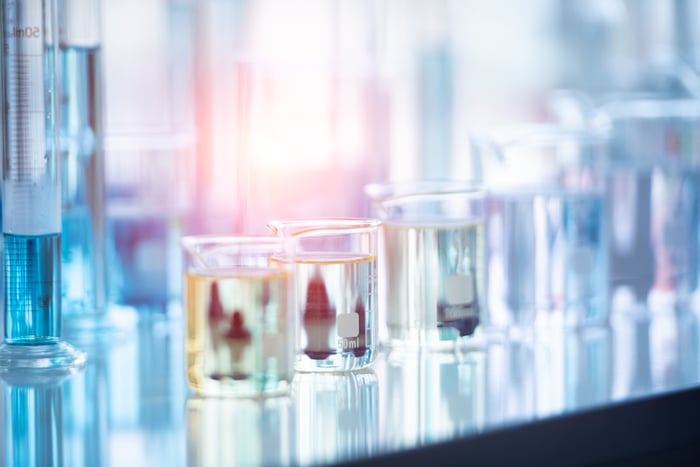 There are two major reasons why Merck isn't too reliant on Keytruda yet. First, the company has other products to count on to drive its sales. Most notably, Merck's vaccines lineup -- which includes cancer prevention vaccines such as Gardasil and Gardasil 9 -- is performing well. During the second quarter, sales from the company's human health vaccines unit were $2.5 billion, a 17% year-over-year increase. Second, and perhaps most importantly, Merck still has a lot of room to grow.

Keytruda is currently being tested for treatment for a range of other cancers, including breast cancer, cervical cancer, and liver cancer, among many others. Thus, there are likely more approvals for Keytruda on the horizon. Case in point: Keytruda was also approved for the treatment of head and neck cancer in Europe recently. According to estimates, there were 146,000 new cases of these conditions in Europe in 2018, and 66,000 deaths resulted from them.

Further, Keytruda was approved for the treatment of lung cancer in China, where lung cancer is the leading cause of cancer death. There are almost 800,000 new cases of lung cancer diagnosed every year in the country, and about 631,000 deaths associated with it. In other words, Keytruda's market just expanded somewhat significantly, which should be beneficial both to those receiving treatment for these deadly diseases and for Merck.

Keytruda is projected to become the world's best-selling drug by 2024 as Humira faces stiff competition from biosimilars in Europe. The cancer medicine will likely continue on its upward trajectory and may eventually account for a much larger percentage of Merck's sales. With its top-selling product leading the way, Merck's future looks bright at the moment, and the pharma stock looks like a buy heading into 2020.

Is Merck's Planned Acquisition of Acceleron in Trouble?