Snap (NYSE:SNAP), maker of disappearing-message app Snapchat, has found some middle ground between Facebook and Twitter in the kerfuffle over political ads, saying it will fact-check them. Twitter is banning them while Facebook has been under fire after saying it won't fact-check political ads that run on its platform, arguing that would negatively impact free speech and give Facebook too much power.

Snap CEO Evan Spiegel said in a recent interview with CNBC that his company has employees tasked with fact-checking any political ads that appear on Snapchat. "What we try to do is create a place for political ads on our platform, especially because we reach so many young people and first-time voters we want them to be able to engage with the political conversation, but we don't allow things like misinformation to appear in that advertising," he said. 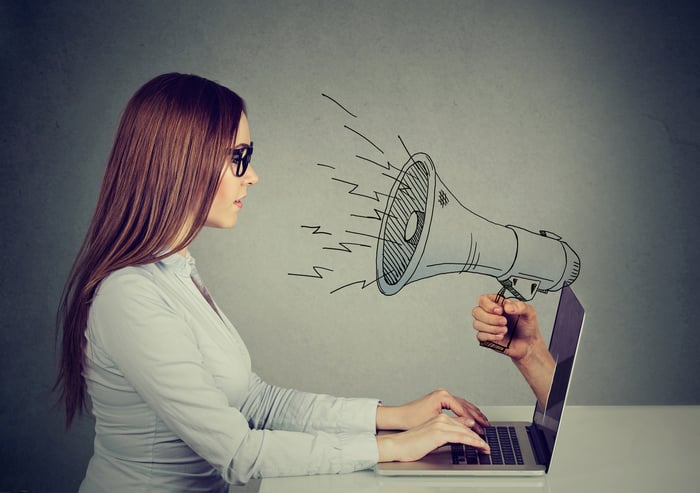 Snap's stock got a quick boost

Snap's stock jumped the day Spiegel made his comments about fact-checking. It would make sense that investors were buoyed by the news. With regulators, lawmakers, and privacy groups coming down hard on social media companies, those that can take steps to demonstrate they aren't spreading false content may stand out. If Snapchat only accepts fact-based political ads, it may draw more advertisers to its platform in the run-up to the 2020 election, which is forecast to see new records in terms of ad spending.

According to WPP's media investment unit, GroupM, political ads are forecast to increase in 2020 as compared to 2018, with digital ads leading the growth. Snapchat has a user base of younger voters that political operatives will want to reach -- a  get-out-the-vote campaign Snapchat ran in the fall of 2018 resulted in more than 400,000 people registering to vote -- so it stands to benefit from the election cycle. The fact-checking plan also gives Snapchat the opportunity to steal users from Facebook by positioning itself as a social media platform that deals in facts.

Snap's political-ad revenue is on the upswing

While Snap's revenue from political ads is small, it is growing. According to OpenSecrets.org, in the eight weeks following Snap's September launch of its database that shows all the political ads it runs on its platform, ad spending from political campaigns on the platform jumped to $2.8 million from $600,000.

Snap isn't luring tons of money from politicians, OpenSecrets.org found presidential candidates for the 2020 election have spent just $232,825 on Snapchat so far, but it's seeing red-hot growth. For instance, President Donald Trump's re-election campaign almost doubled its ad spending on Snapchat, to $80,000 over the less than eight-week period since the database was launched, according to OpenSecerts.org.

Twitter and Snap aren't the only tech companies trying to distance themselves from how Facebook is dealing with political ads. Alphabet's Google is also in the fray, saying recently that political advertisers can no longer target specific audiences.

...we're limiting election ads audience targeting to the following general categories: age, gender, and general location (postal code level). Political advertisers can, of course, continue to do contextual targeting, such as serving ads to people reading or watching a story about, say, the economy. ... Whether you're running for office or selling office furniture, we apply the same ads policies to everyone; there are no carve-outs. It's against our policies for any advertiser to make a false claim -- whether it's a claim about the price of a chair or a claim that you can vote by text message, that election day is postponed, or that a candidate has died.

While there's a lot to like about Snap's stance on political ads, it may not drive the shares higher over the long term. Taking these steps to play a positive role in the 2020 election is commendable, but it also means Snap could miss out on potential ad sales. Sure, its stock got a boost when it revealed its policy, but shares have been surging for weeks now, partly because its daily active users, now at 210 million, were up 13% in the third quarter compared to a year ago.

When Twitter announced it would no longer accept political ads on its platform, privacy advocates and some lawmakers applauded its move, but some investors weren't as impressed; they worried about the impact that turning away political advertisers would have on Twitter's revenue. Then there's Facebook: It may be facing blistering criticism in the press and from lawmakers for its decision on political ads, but it's still growing its user base and its stock price.

While Snap appears to be choosing a position that will land it on the right side of history, how it will fare this political season is still up in the air. Political advertising will be heating up in the new year and investors will be closely watching how things play out on the digital ground.