18 years ago, a small company in the United Kingdom introduced a new type of software that would eventually be called Robotic Process Automation, or RPA. The idea that inspired it is that many people in white-collar occupations hate to do boring, mundane, repetitive tasks. Think of soul-crushing office work like processing invoices, validating files, or adding data to spreadsheets.

What if software started doing these jobs for us? What if we could create "virtual robots" that do the boring, repetitive, mindless stuff? It would free up human beings to do the creative, fun, and interesting work. And that's why Blue Prism (OTC:BPRM.F) was created. 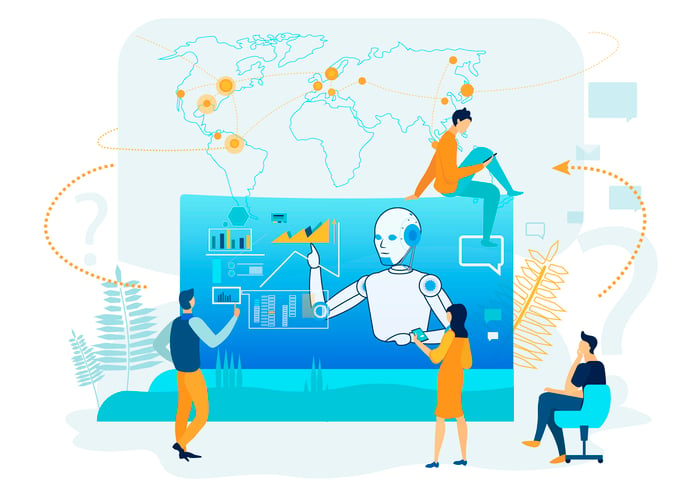 Robot Process Automation was originally rules-based software that simply automated back-office functions and administrative processes. But now RPA is morphing into an ecosystem for artificial intelligence.  For instance, using RPA, a chatbot will interact with customers on its own. If the software can't solve the problem, then an employee will be notified.

Right now, the market for Robotic Process Automation is quite small, approximately $1.5 billion in 2018. Forrester estimates it will reach $2.9 billion by 2021.  However, RPA is at the center of a disruptive wave that is predicted to have a larger economic impact than self-driving cars, or even the Internet of Things. McKinsey and Company predicts that automation of knowledge work will affect $6.7 trillion worth of the economy by 2025. If you have a white-collar job in the next decade, virtual robots will probably be working with you.

Fantastic growth for this software company

Blue Prism was the first (and so far the only) RPA company to go public. It started selling its shares on the Alternative Investment Market (a sub-market of the London Stock Exchange) in 2016. At the time it went public, a little over three years ago, Blue Prism had around 75 customers.  In two years, that number has skyrocketed to 992 customers.  In its latest earnings report, Blue Prism reported an increase in its customer base to 1,677.

The stock has returned 711% to its investors since its IPO, or an 8-bagger in Peter Lynch's lingo.  And it's been a wild ride, of course. Blue Prism's stock chart looks like a drawing of the Alps. By Sept. 2, 2018, the stock had returned over 2,000% to its investors in a little over two years. Since then the stock has had a brutal fall-off, losing about 66% of its value, as many commentators said the shares were over-valued.

Fast forward to Nov. 22, when the company not only released a positive earnings report but also announced it is now offering a cloud and software-as-a-service (SaaS) solution. The bulls went mad and the stock shot up 30% in one trading session.

While it's highly volatile, Blue Prism is still very much a small-cap, with a market capitalization of $1 billion.  The company is forecasting its 2019 revenues to be at least 98 million Great Britain pounds (GBP), up from 55 million GBP last year.

Blue Prism has two major competitors, both private. The first one, UiPath, was valued at $7 billion dollars in its latest funding round in April this year. Founded in Romania in 2005, the company has an impressive list of customers, including Alphabet, McDonald's, Uber and the U.S. Navy.

However, in October, just months after its $7 billion valuation, UiPath laid off hundreds of employees and its chief financial officer resigned.  That was shocking news and sent Blue Prism's stock down on fears that the market for RPA growth has been over-estimated. It now appears that UiPath's bad news was company-specific. And so Blue Prism was rewarded, not just for its good numbers, but for the fact that a major competitor is in serious trouble.

Of course, since Automation Anywhere is private, we don't have access to its sales numbers. But in its marketing materials, the company brags that it is the "world's most widely used RPA." Also, it's notable that Salesforce Ventures, the venture capital division of Salesforce.com, led the Series B funding for the company.

Now in the cloud

While many commentators were happy about Blue Prism's growth estimates, the most exciting news is that Blue Prism's RPA solution is now available as a Software-as-a-Service (SaaS) offering.

This is a very big deal, as SaaS stocks have had outstanding returns in the stock market. While standard software has always been a strong business model, SaaS is far superior, for a myriad of reasons. With SaaS, you don't have to pay the huge upfront costs of buying and installing the software. Using the SaaS model, one or more employees can simply download the software and start trying it out. And SaaS companies have strong networking effects that give them monopoly-like power, making it very hard for a competitor to come along and dislodge them.

With its offerings now in the cloud, Blue Prism could expect dramatic sales growth, perhaps even larger than what it has seen in the past. And the company has a high profile because of its status as the founder of robot process automation, and the first public company in this sector. It's definitely a name, and a sector, to keep an eye on.