Amid the drama of Xerox's now hostile bid to acquire HP (NYSE:HPQ), the latter company reported some decent fiscal fourth-quarter results. HP managed to beat analyst estimates for both revenue and earnings thanks to solid growth in its commercial PC business, with adjusted earnings per share up 11% year over year.

That double-digit earnings growth won't stick around in 2020. A tough environment for the printing business, the eventual end of the commercial PC upgrade cycle triggered by the end of support for Windows 7, and continued shortages of certain Intel processors will put pressure on HP's results. A massive share buyback program will prop up the per-share numbers, but HP's profits are set to take a dive next year. 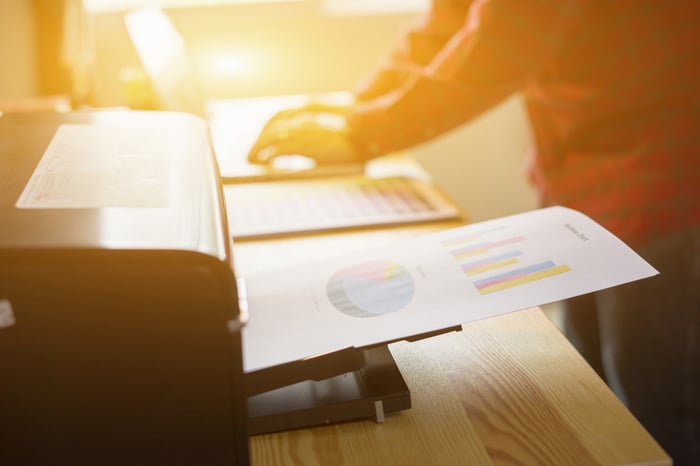 Not so great guidance

Flattish per-share earnings doesn't sound so bad, but HP will probably need to buy back billions of dollars of its own stock to hit these numbers. The company spent $2.4 billion on share buybacks in fiscal 2019, and it added $5 billion to its buyback authorization in October as part of its restructuring plan. That plan also involved laying off thousands of employees, deep cost cuts, and a change of strategy in the printing business.

If HP reduces its share count in fiscal 2020 by the same percentage as it did in fiscal 2019, adjusted net income will be down between 3.2% and 6.6% based on its guidance. The steep expected drop in free cash flow is even more concerning, although free cash flow can be more volatile than earnings.

The stock looks cheap, but it probably isn't

Based on the midpoint of HP's fiscal 2020 adjusted earnings guidance, the stock currently trades for just 8.5 times earnings. If you could be confident that HP would be able to maintain its current level of earnings in the long run, that valuation would be tempting.

But HP probably won't be able to prop up its per-share profits indefinitely. Selling overpriced printing supplies to its install base is the company's biggest source of profits, and that business is under siege by low-cost competitors.

Facing competition from third-party ink sellers, HP plans to try to make more money selling printing hardware, shifting away from the lucrative razor-and-blade business model. It seems unlikely that the company will be able to maintain the lofty margins of the printing business under this new model.

Without much of a path to earnings growth, HP's depressed stock doesn't look like a good value.