So much for competition weighing on results.

Workplace-collaboration software company Slack Technologies ( WORK ) released an impressive third-quarter update on Wednesday. The company crushed expectations for both its top and bottom lines, drawing attention to its powerful growth story. The news comes after Slack's shares have pulled back in recent months on worries over competition.

But Slack is proving the naysayers wrong. Not only did its revenue beat expectations, but revenue growth also accelerated compared with the already impressive growth it delivered in Q2. 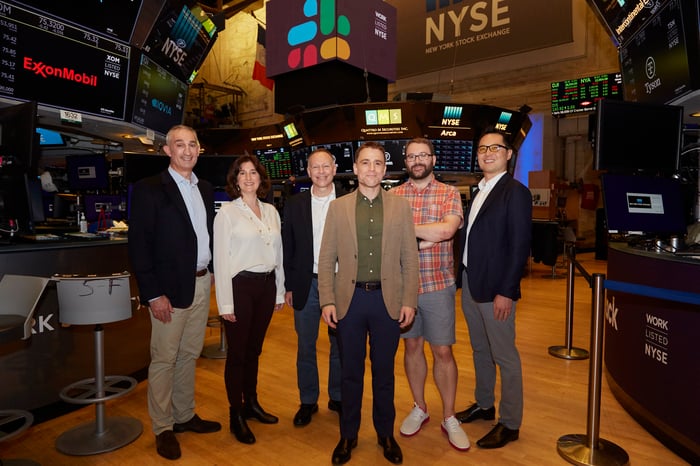 Slack's revenue jumped 60% year over year to $168.7 million. This was ahead of management's outlook for revenue during the period to be between $154 million and $156 million. And it beat analysts' average forecast for revenue of $156 million. Capturing the company's strong momentum, its third-quarter year-over-year revenue growth rate marked an acceleration from 58% growth in Q2.

Profitability improved as well, with non-GAAP (adjusted) operating margin rising by 26 percentage points versus the year-ago period. Furthermore, the company's non-GAAP loss per share for the period came in at $0.02, narrower than a consensus estimate for a loss of $0.08.

Growth during the period was driven by the tech company's continued move upmarket. Slack ended Q3 with 821 customers that were contributing more than $100,000 in recurring revenue (101 of these customers were added during Q3). This is up 67% year over year.

"We also exceeded 50 Paid Customers with greater than $1 million in annual recurring revenue for the first time, an indication that large enterprises are increasingly standardizing on Slack as their primary collaboration platform," CFO Allen Shim said in the company's third-quarter update.

Given Q3's strong performance, Slack unsurprisingly lifted its outlook for the full year. It now expects total fiscal 2020 revenue to be between $621 million and $623 million, representing 55% to 56% year-over-year growth. Previously, it expected revenue in fiscal 2020 to rise 51% to 52% year over year.

Given Slack's strong traction with enterprise customers and its accelerating revenue growth, the company likely tempered some of the Street's concerns about its ability to maintain its leadership position in the fast-growing market for collaborative communication software.