Breaking up Amazon.com (NASDAQ:AMZN) to diminish its power is not a new idea -- activists and politicians of both parties have advocated it for years. While support for the suggestion hasn't really gained much traction, it is growing, and the concept just might have an unlikely backer: Amazon founder and CEO Jeff Bezos.

Undoubtedly, he would prefer to keep the company he created and initially ran out of his garage as a single united entity, but rather than waiting for the government to break it apart, Bezos just might opt to do the dividing himself to ensure an orderly separation and allow the components to thrive. That could work out well for investors too. 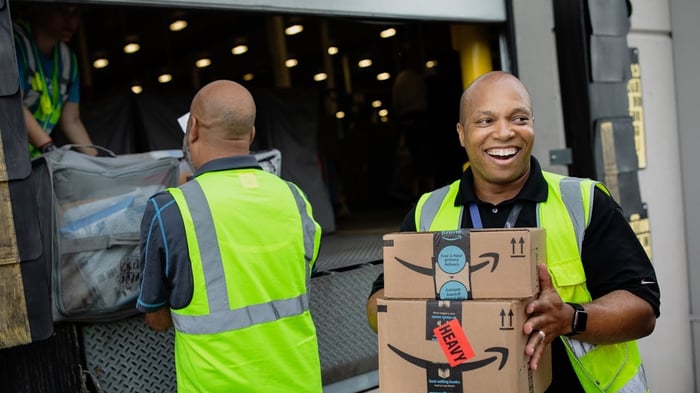 Amazon, of course, is best known for its e-commerce business, which provides a massive global marketplace where consumers can purchase just about any product, either directly from the retailer or from its third-party sellers.

Yet Amazon's crown jewel is its web services division. Over the first nine months of 2019, during which time e-commerce and other ancillary businesses accounted for over 88% of Amazon's $160.5 billion in total revenue, Amazon Web Services (AWS) generated almost 60% of the company's operating profits.

This is why many believe breaking up Amazon would be disastrous for the company because serving as the internet backbone of numerous businesses (and various government agencies) has allowed it to finance the growth of its otherwise money-losing retail operations.

But that's actually not the case anymore, and could be why Bezos might support splitting the company in two.

Standing on its own

While AWS is tremendously profitable, Amazon's North American retail operations are nearly equally so. That division produced $5.01 billion in operating profit through the first three quarters of the year compared to $5.12 billion for AWS. E-commerce margins may be considerably lower, or 4.6% on a trailing basis versus 27% for AWS, but it is a very profitable business these days nonetheless.

Where Amazon is still struggling, however, is in its international retail business, which reported cumulative operating losses of $1.5 billion in the third quarter and margins of negative 2.4%. But that's better than the negative 3.8% a year ago, and the international operations will likely turn profitable sooner rather than later. At this point, Amazon's retail efforts could subsidize their own growth toward profitability without needing to lean on AWS.

"I think that eventually Bezos, who is seeing around corners, is going to break up his own company," said Foer, because the two business segments no longer need to be joined at the hip. And due to rising political populism in both parties, Bezos may want to get out in front of the wave. It "would be the obvious thing for him to do in the face of this," Foer said.

It could make financial sense, too. According to a recent Morningstar analysis that measured the values of Amazon's individual business segments, the $900 billion tech giant is trading at a value that is far less than the sum of the values of its parts. Morningstar estimated that AWS alone is worth some $550 billion, and it already has its own CEO and CFO, so it operates fairly independently as it is.

Splitting up Amazon could even lead to a situation in which its successor companies were better run, as corporate behemoths tend to grow sclerotic -- though there are no signs that has become an issue yet for the e-commerce giant.

We should be wary of any government that wants to penalize success as the modern trustbusters seek to do, but sometime in the next few years, Bezos may decide that voluntarily breaking up Amazon -- and giving us two attractive tech stocks to invest in instead of one -- would be a better alternative than waiting for Washington to step in.