On Dec. 3, U.S. iron ore pellet-producer Cleveland-Cliffs (NYSE:CLF) agreed to purchase U.S. steelmaker AK Steel (NYSE:AKS) in an all-stock deal. Cleveland-Cliffs will issue 0.4 shares to shareholders of AK Steel upon closing, which is supposed to occur by the end of the first half of 2020. The share exchange rate equals only roughly a 16% premium to AK Steel's stock price from the prior day, given where Cleveland-Cliffs' shares were trading.

Both stocks have been affected by volatile steel prices this year. Though Cleveland-Cliffs is a producer of iron ore, its contracts have a component tied to the price of steel, which has offset the better iron ore prices that have surged this year following the collapse of the Brumadinho dam in Brazil this past January.

Investors were apparently not enthused by the announcement, however, with Cleveland-Cliffs stock down 10.7% on the day of the announcement, though AK Steel's stock rose by 4.2%. Regardless of the initial reaction, however, I think this deal could be a good merger for both parties. Here's why. 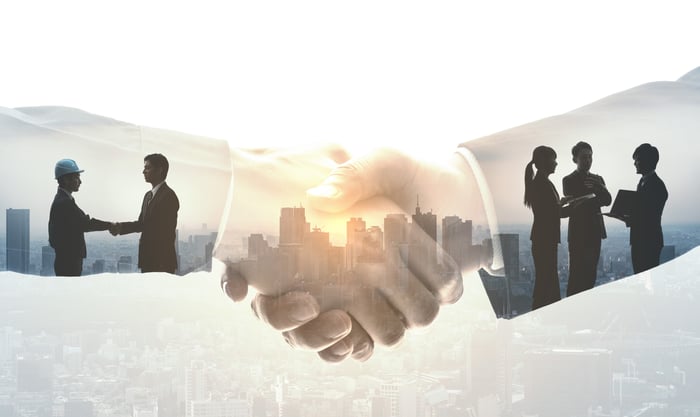 Vertical integration has its benefits

The new company will combine Cleveland-Cliffs' iron ore pellet production capabilities, of which it had about 42% U.S. market share, with AK Steel's blast furnace steel plants and downstream businesses, which make specialized, high-grade steel parts, especially for the auto industry. As such, the company will become vertically integrated, meaning it will own its own supply of iron ore pellets, which are used to make steel.

For AK Steel, that means it will be somewhat shielded from future spikes in iron ore prices, as had occurred this year. Though the company has hedged much of its iron ore prices for 2019, hedging isn't free, and when the hedges roll off, they may become more expensive, should iron ore prices remain high.

For Cleveland-Cliffs, AK Steel accounted for roughly 30% of its sales, and its take-or-pay contract was up for renewal in 2022 and 2023. Acquiring a large customer thus takes away the renewal risk for Cleveland-Cliffs. In addition, since iron ore prices have risen this year while steel prices have declined, the transaction also takes away a risk of a reversion to a lower iron ore price.

With 30% of sales taken care of, another 40% to 50% of pellet sales contracted with ArcelorMittal (NYSE:MT) through 2026, and another 15% set to be used by Cleveland-Cliffs' new HBI plant coming in 2020, much of Cleveland-Cliffs' supply is now derisked for the next six years.

Basically, with some captive supply and optionality in where Cleveland-Cliffs can ship its remaining iron ore pellets, management can direct the company's 20 million-ton iron supply to wherever it can get the highest return.

Synergies on both the cost and revenue side

In addition to derisking supply and taking some commodity-price risk off the table, the combined companies are set to achieve a fairly substantial $120 million in cost synergies, of which $40 million will come just from duplicative public company filing costs alone. That amounts to a pretty significant 10% of the combined companies' EBITDA (earnings before interest, taxes, depreciation and amortization) over the past 12 months.

These near-term debt maturities were probably weighing on AK Steel's stock price, which had fallen some 70% over the past three years, as opposed to just a 9% decline for Cleveland-Cliffs. 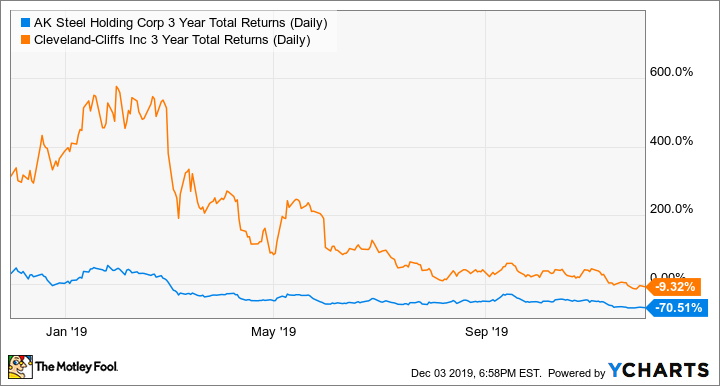 That could mean that even exclusive of synergies, Cleveland-Cliffs may be getting a good deal. AK Steel has outsize exposure to the automotive sector, which is currently under pressure. However, AK Steel also makes the advanced high-strength steels and ultra-high strength steels that should be in demand for car companies looking to meet the upcoming 2025 U.S. CAFE fuel standards.

As such, the opportunistic acquisition of AK Steel after a huge drop in steel prices could wind up being a savvy value investment for Cleveland-Cliffs, even exclusive of the synergies and vertical integration benefits.