The stock market hasn't been kind to Slack Technologies (NYSE:WORK) since its public debut in June. The much-hyped workplace collaboration software specialist had a great opening day, but the stock has plunged nearly 44% in the months since. What's driving the decline? Primarily, fears of competition.

Slack reported its third-quarter earnings after the market close on Wednesday, and the results illustrate that the company continues to thrive, despite the competition. 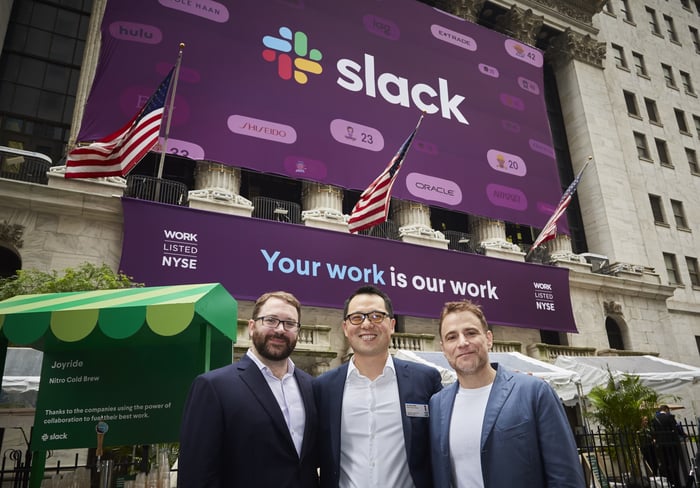 For the fiscal 2020 third quarter, Slack reported revenue of $168.7 million, up 60% year over year. This flew past analysts' consensus estimates and management's forecast, which topped out at $156 million. Calculated billings, a sales growth metric that factors in changes in deferred revenue, topped $186 million, increasing 47%.

Slack's adjusted operating loss clocked in at $18.1 million, or 11% of revenue, compared to a loss of $39.6 million or 37% of revenue in the prior-year quarter. This resulted in an adjusted loss per share of $0.02, much improved from the $0.30 loss this time last year. It was far better than its forecasted loss of about $0.08, a view that was shared by analysts.

There were a number of other operational metrics for the latest quarter that were equally compelling.

The company ended the quarter with more than 105,000 paid customers, an increase of 30% year over year. Slack not only added new users at a brisk pace, but existing customers spent more. Slack's net dollar retention rate -- which estimates increased spending by its customer base -- was 134%. Put another way, current clients are spending 34% more than they did a year ago, a testament to the value they are finding in Slack's product offerings.

After extensive beta-testing, Slack launched Shared Channels, a product that allows two companies that use Slack to create a shared channel that fosters collaboration across the organizations. Even though it wasn't released until halfway through the quarter, about 26,000 shared channels were used by paying customers in Q3. On the conference call, co-founder and CEO Stewart Butterfield revealed that 80% of the customers spending $100,000 or more annually are now using the feature -- which isn't offered by any competing software.

Butterfield also addressed what he believes is a misconception regarding direct competition between Slack and Teams:

Although Microsoft markets Teams as a Slack competitor ... in practice, these are different tools, used for different purposes, and our customers achieve markedly different results. Just look at the weak engagement numbers that Microsoft themselves reported about Teams and the much deeper level of engagement you see among Slack users ... That's why we've continued to add Office 365-using enterprise customers at the $100,000-plus level and at the $1 million-plus level.

He also suggested that Microsoft would likely announce "50 million [Teams DAUs] in the next six months and then 100 million within the next year," but these additional users would likely demonstrate weak engagement as well because of the forced migration to Teams from Skype for Business, which is artificially pumping the numbers.

It isn't just the current quarter that has Slack enthusiastic. The company raised its full-year guidance and now forecasts total revenue of between $621 million and $623 million, representing year-over-year growth of 55% to 56%. To put that into perspective, just last quarter, management was guiding for total revenue of $603 million to $610 million, representing year-over-year growth of 51% to 52%. Slack is also expecting more moderate losses, with an adjusted loss per share of about $0.32, an improvement from the $0.41 loss in its previous forecast.

The company's strong results this quarter -- even in the face of the continued growth of Microsoft Teams -- seems to support Butterfield's conclusion that the two aren't direct competitors and that many customers use both. This shows that there's plenty of room in the software-as-a-service (SaaS) space for more than one offering, and the threat from Slack's supposed rival might just be overblown.