Shares of Sportsman's Warehouse (NASDAQ:SPWH) jumped more than 14% on Thursday morning after the outdoor sports equipment retailer reported solid third-quarter results and raised fourth-quarter and full-year guidance. Companies involved in firearms sales have been under pressure in recent years, but results from Sportsman's Warehouse appear to indicate the worst has passed. 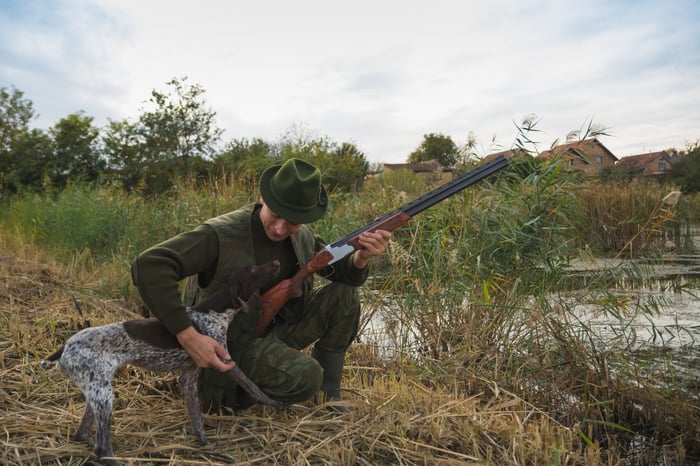 The firearms industry has been under the gun in recent years, pressured in part by efforts to increase regulations in response to some high-profile shootings. Shares of Sportsman's Warehouse are down more than 30% over the past four years even after Thursday's gains and were down more than 50% as recently as this summer.

The company has attempted to take advantage of that weakness -- and of some competitors' discomfort with firearm sales -- by taking market share. In October, Sportsman's Warehouse bought the Field & Stream retail locations from Dick's Sporting Goods as Dick's attempts to distance itself from the market.

"These strong results are reflective of our differentiated positioning within a consolidating industry and the team's disciplined execution of our growth strategies around merchandising, customer acquisition and engagement, and our omni-channel platform," CEO Jon Barker said in a statement. "As we look to the final quarter of the year, we feel very good about our competitive positioning and the underlying strength of our business."

The long-term future of the firearms business is up for debate, but over the next 12 to 18 months, the trends are likely to work in Sportsman's Warehouse's favor. Recent background-check data suggests that after a prolonged period of weakness, gun sales are trending higher. And the industry usually performs well in a presidential election year, fueled by candidate rhetoric about gun-control legislation.