It's been decades since Walmart (NYSE:WMT) changed the retail world forever. With its emphasis on rock-bottom prices for consumers, Walmart's big-box store locations spread quickly across the nation. Even now, Walmart remains a top employer among global businesses and still plays a dominant role in how millions of shoppers get the goods they want at prices they can afford.

More recently, though, Walmart has had to deal with a new disruptive influence on the retail industry. The rise of e-commerce challenged Walmart's brick-and-mortar store network, and the company has had to respond to competitive pressure by bulking up its own online presence. Although Walmart's strategy has borne some success recently, dividend investors still wonder whether they'll be able to participate more fully in Walmart's rebound with larger payout increases than they've gotten in recent years.

Here, we'll take a closer look at Walmart and whether shareholders can expect higher dividends in 2020.

How Walmart's dividend growth slowed to a crawl

With nearly half a century of annual dividend increases, income investors have to be pleased with Walmart's track record. Yet those who rely on dividends haven't liked the trends that they've seen in the recent past.

When you look back to the early part of Walmart's history, dividend investors clearly benefited from the growth of the business. Double-digit percentage dividend increases happened frequently during the 1980s and 1990s, and there were some years during the 2000s and early 2010s when Walmart chose to boost its quarterly payout by 20% to 40%. 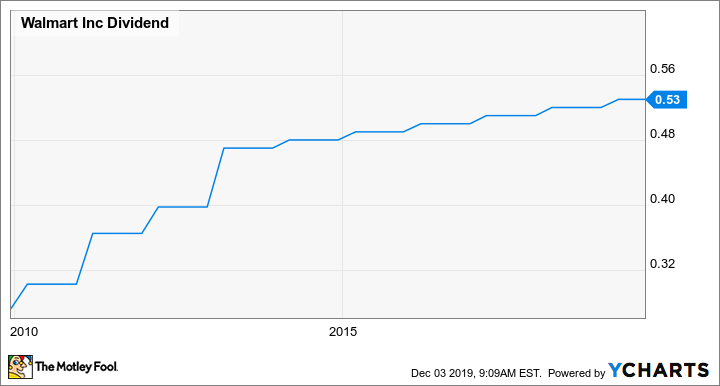 Yet Walmart has chosen to moderate its pace of dividend growth considerably. Starting in 2014, Walmart has limited its dividend increases to just $0.01 per share, which has worked out to around 2% per year.

Walmart has a fully mature business, but it's done what most large companies struggle to achieve: return to a faster growth trajectory. After years of stagnant performance, Walmart has seen its overall revenue start to rise more quickly again. Moreover, despite significant investment in building out its e-commerce capabilities, net income is climbing back toward levels last seen early in the 2010s, with the potential for even greater gains to come. Some of Walmart's success has stemmed from efforts to pull customers back into its stores. The rise of the company's grocery business has given shoppers a reason to visit its store locations on a regular basis, giving them more chances to shop throughout the rest of its supercenters. Efforts to compete by offering greater assortments of fresh food have paid off for Walmart.

Yet Walmart has also relied on increasing its efficiency, both in stores and through its e-commerce portal. Commitments to deliver products to shoppers more quickly either through direct shipping or options like in-store pickup have resonated well with its customer base. With the holiday season in full gear, Walmart has plans to keep giving customers the convenience and low prices they demand from the retail giant.

Will Walmart give investors a bigger dividend increase in 2020?

Walmart has used more of its available capital to reinvest into its business, and shareholders like the results that they're seeing in the retailer's fundamental performance. As long as Walmart has profitable ways to put its cash to work, it's less likely to deliver huge dividend boosts to shareholders. Because of that, dividend investors  should expect Walmart to continue its past practice of giving them just a $0.01 per share boost to $0.54 per share each quarter in 2020. That won't make the stock's dividend yield much more attractive, but investors won't care if the stock price keeps rising at its recent pace.