The broader stock market has performed relatively well this year, with the S&P 500 index up by about 23% since the beginning of the year. However, some stocks have performed much better than that. One of them is Arrowhead Pharmaceuticals (NASDAQ:ARWR), a biotech stock that's up by more than 420% since early January.

These gains are impressive by almost any standard, but despite the company's trouncing the market this year, an investment in Arrowhead is a risky move -- here's why.

Why Arrowhead has been flying high all year

Arrowhead focuses on the development of medicines using RNA interference (RNAi) technology, which seeks to "silence" the genes that cause certain illnesses. The major catalyst behind the company's recent performance was its partnership with Janssen Pharmaceutical, a company owned by Johnson & Johnson (NYSE:JNJ). Per the agreement, Janssen acquired the exclusive right to license ARO-HBV (now called JNJ-3989), a drug being developed to treat hepatitis B. 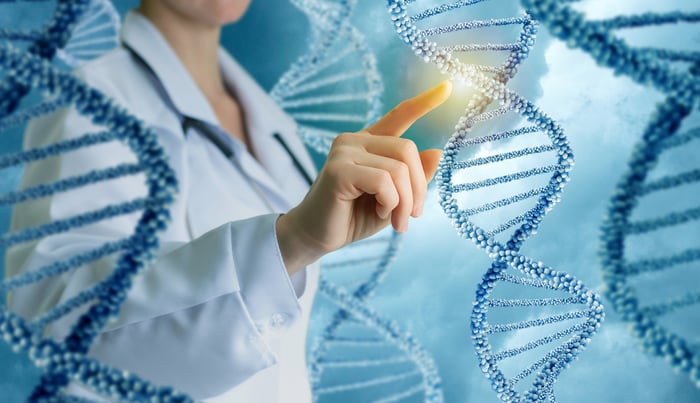 JNJ-3989 is still in phase 2 testing, and Janssen also acquired the option to collaborate with Arrowhead on up to three RNAi drugs against new targets, although these drugs cannot come out of Arrowhead's current pipeline. For its part, Arrowhead received an upfront payment of $250 million (including $175 million in cash and a $75 million equity investment); additional incentive payments could reach up to $3.5 billion.

This deal had a major impact on Arrowhead's financial results. The company recently released its fourth-quarter and full-year earnings report for its fiscal year 2019, and for the full year, its revenue was about $168.8 million, a 945% year-over-year increase. The company also recorded net income per diluted share of $0.69 for the year, after posting a net loss per diluted share of $0.65 last year. In addition to its partnership with Janssen, Arrowhead boasts a pipeline that could give birth to interesting -- and lucrative -- medicines.

For instance, the company's ARO-AAT, a drug being developed for liver disease, is currently in phase 2 testing. Arrowhead is also hoping to develop drugs to treat such conditions as cystic fibrosis (CF), which affects some 75,000 people in North America, Europe, and Australia.  The market for drugs that treat CF is currently a monopoly: Vertex Pharmaceuticals (NASDAQ:VRTX) owns the rights to several drugs (the only ones in the world) that treat the rare condition. Considering how successful Vertex has been thanks in large part to its drugs for CF, entering this market could mean huge gains for Arrowhead.

Yes, Arrowhead has a partnership with Janssen from which it has already benefited quite a bit, and yes, the company's pipeline looks interesting, but here's the catch: Arrowhead currently doesn't have any drugs of its own on the market. In fact, none of the medicines in its current pipeline have even made it to the FDA's desk for approval yet, which means the company's future hinges on a series of drugs that are still in the testing phase.

Arrowhead could end up developing state-of-the-art drugs and growing its top line rapidly, but given that its closest approval is still at the very least several months away, purchasing shares of this biotech stock carries significant risk. For those who are comfortable taking on those risks, Arrowhead is an intriguing play, but for risk-averse investors, there are plenty of other promising pharma stocks to choose from.