2019 hasn't been the best of years for the energy sector, although oil giants like Chevron (NYSE:CVX) have done their best to make the most of available opportunities. Even with crude oil remaining at relatively low levels, Chevron's stock is up slightly for the year, although it's trailing the performance of broader stock indexes.

For dividend investors, Chevron's appeal remains strong. The oil giant has consistently made bigger payouts to its shareholders over the years, and even though the energy markets haven't entirely cooperated with its business plans, Chevron has nevertheless worked hard to solidify its ability to keep making growing dividend payments over time. Let's look more closely at Chevron to see what dividend investors should expect in 2020.

Through good times and bad, Chevron has historically kept its dividend on the rise. The energy giant currently has one of the most attractive yields among stocks in the Dow Jones Industrial Average, as dividend growth has outpaced its share-price performance over the past couple of years.

Chevron has consistently increased the total annual amount it pays to shareholders every year, but at times, it's done so while still going through an entire calendar year without a dividend hike. For purposes of measuring dividend streaks, most investors look at the sum of all four quarters' worth of dividend payments. Therefore, if a company raises its dividend in the middle of one year, the total amount paid the following year will be larger because it won't include the smaller payments made at the beginning of the first year. 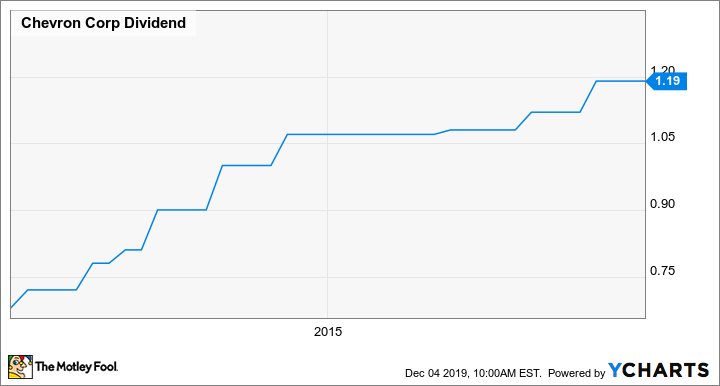 As you can see in the chart above, Chevron used that strategy between 2014 and 2016. The oil giant made a midyear boost in 2014 but then left its dividend constant throughout 2015. Even though Chevron went more than a full year without a dividend increase, the four quarterly payouts of $1.07 per share each added up to $4.28 in 2015, up from $4.21 in total dividend payments per share in 2014. The next hike happened in the fourth quarter of 2016, with the $0.01 per-share boost resulting in a total of $4.29 per share in annual dividends that year.

Fortunately for dividend investors, Chevron has made somewhat larger payout increases recently. The 6% boost in 2019 to $1.19 per share was its biggest in years.

What's next for Chevron's dividend?

Oil prices haven't exactly cooperated with Chevron or its energy peers in 2019, but that hasn't stopped the company from looking for ways to succeed. Efficiency has played a key role in helping Chevron deal with weak energy markets, as the company has sought to emphasize lower-cost production assets and has targeted the most lucrative areas with its capital spending. The result has been a leaner business, both on the production side of the company and in its downstream refining and marketing operations.

Given what the company did with its payout last year, Chevron seems likely to make another increase to its dividend in 2020. A $0.06 boost to $1.25 per share would be a decent balance between current conditions in the energy market and Chevron's capacity to share capital with investors.

What might prove more interesting, though, is whether Chevron waits until later in the year to do an increase, breaking with its first-quarter timing over the past few years.