Please ensure Javascript is enabled for purposes of website accessibility
Free Article Join Over 1 Million Premium Members And Get More In-Depth Stock Guidance and Research
By Daniel Foelber - Nov 16, 2019 at 8:06AM

This clash of titans has a clear winner.

Chevron ( CVX -0.63% ) and ExxonMobil ( XOM -0.64% ) are the largest American integrated oil and gas companies and two of the leading energy companies in the world. Comparing the two companies has been a clash of titans that's been raging for decades, yet the companies are incredibly different. ExxonMobil has the second-most refining distillation capacity in the world, whereas Chevron focuses mostly on exploring for and producing hydrocarbons. Chevron's stock has consistently outperformed Exxon for the last 10 years, but which stock is the better buy for the next 10 years? 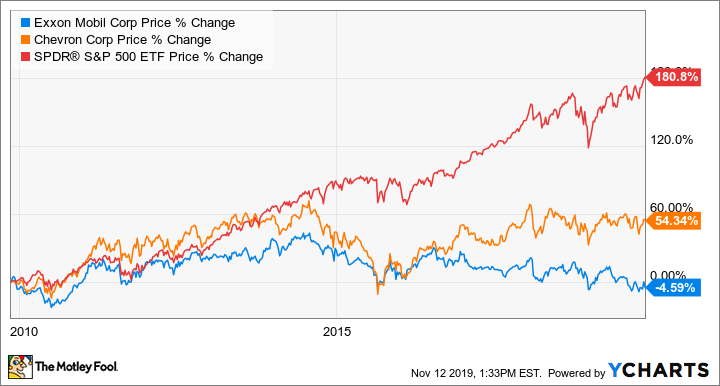 Excluding dividends, Chevron stock has outperformed ExxonMobil's 54% to -4.6% over the last 10 years against the S&P 500's 181%, a small victory for Chevron despite the more important underperformance against the broader sector. 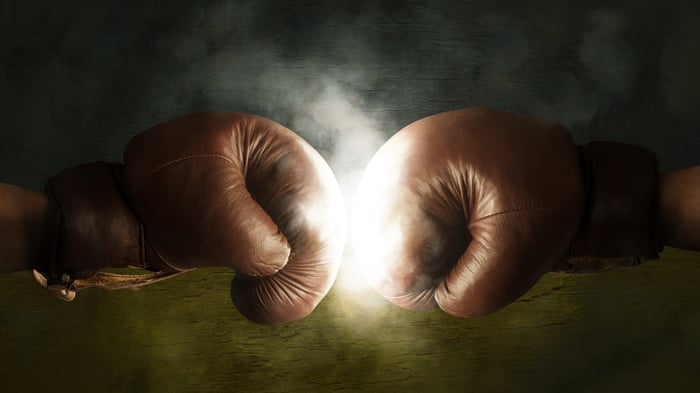 Integrated oil and gas companies have been languishing since the oil downturn of late 2014 and early 2015 as companies adjust to the new reality of lower-priced oil. Years of significant underperformance against the broader index are trying investor patience, overshadowing Chevron's and Exxon's dividend yields,which are higher than in years past. Fifty-dollar oil has pressured Chevron and Exxon to limit their investments to projects that can be profitable over the long term. As a result, both companies have sold off substantial portions of their lesser-performing assets in favor of regions like the Permian Basin, the largest U.S. onshore oil and gas play, where breakeven can be achieved regularly in the low $40-per-barrel range. The price of oil at which a project can break even helps determine the long-term viability of the project. Breaking even at a lower oil price is a testament to the efficiency of the project and provides a buffer against varying commodity prices.

Chevron's and ExxonMobil's recent Q3 earnings reports added yet another chapter in the ongoing saga of Chevron simply outperforming Exxon on efficiency. In Q2, Chevron had announced average cash flow breakeven at just $51 a barrel, the lowest of any supermajor. Chevron also flashed the lowest net debt ratio at 13.5% and industry-leading earnings per barrel (EPB) of $2.66 for its downstream business. This efficiency continued for the nine months ending Sept. 30, 2019, as Chevron topped Exxon's upstream and downstream earnings, as well as total net income despite the fact that ExxonMobil is the larger company. All in all, Chevron has proved that its efforts to increase efficiency are working, leading to successful performance even in the current mediocre oil-priced environment.

Exxon achieved lower net income than Chevron despite the fact that its revenue was nearly double. This disparity is mostly the result of Exxon having the second-largest refining distillation capacity in the world compared to Chevron at No. 17. The downstream business (refining) is a high-revenue, low-margin game that represents the vast majority of Exxon's and Chevron's revenue, but a minority share of their earnings. Chevron turns more revenue into earnings by focusing on the higher-margin upstream side of oil and gas. Chevron has proved that its upstream business can make money at lower oil prices, providing a cushion in the current market while paving the way for upside when oil prices are higher. As for its downstream business, Chevron's selective investment decisions have led to, again, more income from revenue.

Adjusting to the lower-oil price environment has resulted in a spending bonanza as both companies wrap up international projects while ramping spending in the Permian. Exxon's spending is particularly high, exceeding Chevron in every major category. The large spending is, again, a result of the high-revenue, high-expense, low-margin refining business that Exxon dominates worldwide. Chevron's leaner business model has resulted in success in both the upstream and downstream sides of the business. Most importantly, investors need to understand just how much larger ExxonMobil is in terms of revenue and spending and decide if they are comfortable with that approach.

To Exxon's credit, the company is positioning itself well for "IMO 2020," the International Maritime Organization's long-anticipated regulatory reduction in sulfur emissions that goes into effect Jan. 1.

IMO 2020 is a really big deal that has been on the minds of refiners, shippers, and traders for years. Without getting too deep into the details, the regulation means that demand for the high-sulfur fuel oil, which is currently the main fuel used by commercial fleets across the world, will decrease and demand for low-sulfur or very-low-sulfur grades will increase.

These latter grades can be achieved by combining ultra-low-sulfur diesel with high-sulfur fuel oil, or by upgrading refining facilities. Exxon is preparing for IMO 2020 by upgrading facilities, most notably its Antwerp coker which "upgrades bunker fuel oil currently produced in our Northern European refineries to higher-value products, including ultra-low sulfur diesel," said Vice President of Investor Relations Neil Hansen during the company's Q3 earnings call. The upgrade of the Antwerp coker widens Exxon's lead as the company with the largest global coking capacity of any supermajor, well positioning Exxon for IMO 2020.

ExxonMobil has taken the proper steps to prepare its refineries for increased low-sulfur fuel oil demand, but Chevron is still the winner in this matchup. Chevron's 4% dividend yield is just a little less than Exxon's 5%, which Chevron more than makes up for with better operational efficiency and less spending, which drives net income. Investors should wait and see just how much of an advantage ExxonMobil gets from its favorable positioning for IMO 2020. In sum, Exxon's inability to generate shareholder value over the past 10 years and Chevron's superior efficiency make it the better buy.