Online pet products retailer Chewy (NYSE:CHWY) released fiscal third-quarter 2019 earnings after the markets closed on Monday. The purveyor of a wide range of products from pet food to pet medications completed its initial public offering on June 14, 2019; this is its second earnings release as a publicly traded company.

Since it's generating both brisk top-line growth and significant bottom-line losses, let's walk through five important numbers from Chewy's report that will help us glean a balanced view of the period.

Chewy's third-quarter sales expanded by 40.4% year over year to $1.23 billion. This was likely the most important metric to investors, who bid Chewy's stock up by 5% in midday trading on Tuesday. Continued revenue acceleration holds open the promise that Chewy can continue to gain market share while moving closer to profitability under generally accepted accounting principles, or GAAP.

Chewy's gross margin improved by 410 basis points to 23.7% against the prior-year period, which management attributed to "disciplined execution" and "supply chain efficiency gains across all business verticals, including margin improvements in pharmacy and private brands." Of course, higher sales also played a role, as the organization's double-digit revenue growth undoubtedly helped to decompress its product margins.

Some of the gross margin benefit was offset by higher selling, general, and administrative (SG&A) expenses this quarter. SG&A rose 390 basis points to 21% of sales, against 17% of sales in the fiscal third quarter of 2018.

While a portion of the bump in SG&A can probably be traced to Chewy's ongoing investments in shipping fulfillment centers, most of the investment in fulfillment capacity is booked as capital expenditure on the balance sheet, and not as SG&A on the income statement. So it's safe to infer that Chewy is spending more to generate each sales dollar than it did in the prior comparable quarter -- a trend investors should keep an eye on. 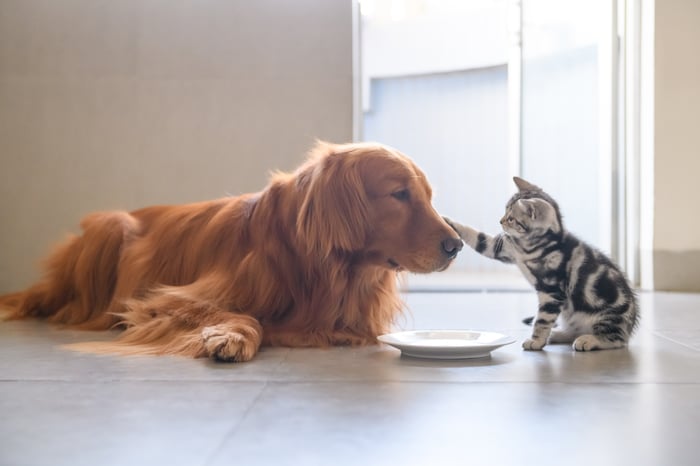 Chewy lost $79 million in the third quarter, which was flat in comparison with the $78.6 million loss posted in the year-ago quarter. But the company's net income margin improved to negative 6.4% against negative 11.1% in fiscal Q3 2018. That is to say that its net loss equaled 6.4% of sales this quarter.

Chewy would prefer that investors focus on its adjusted EBITDA (earnings before interest, taxes, depreciation, and amortization) margin of negative 2.5%. This loss margin is based on adjusted EBITDA of negative $30.2 million. The biggest difference between the organization's net loss of $79 million and its adjusted EBITDA loss is $39.4 million in stock compensation expense, which management removes from the latter calculation.

As a newly public entity, shareholders should seek to understand what drives Chewy's adjusted EBITDA number every quarter. Chewy removes stock compensation expense because it's a noncash expense, and it's trying to present an approximation of cash-based performance each quarter. (Note that EBITDA before any adjustments removes the noncash expenses of interest expense, depreciation, and amortization.)

Nonetheless, it's important to avoid relying solely on adjusted EBITDA to gauge bottom-line performance. Chewy's share-based compensation is significant; it represented more than one-tenth of total operating expense during the quarter. It isn't unusual for young, cash-strapped organizations to utilize their stock to defray compensation expense (growing tech companies often do so).

But over time, share-based compensation tends to represent an amount of recurring expenditure, which may eventually shift over to cash-based expense in the future. So it's wise to look first at Chewy's actual net loss (and net loss margin) each quarter, before absorbing adjusted figures.

Since Chewy has always run at a loss, it's been a net user of cash, meaning that it doesn't generate enough cash to cover basic operations. This quarter, however, the company showed positive operating cash flow of $1.6 million, versus an operating cash burn of $43.2 million during the same period last year.

Before we assume that the organization is turning the corner on cash flow, let's bring some healthy skepticism to bear. Chewy's balance sheet for the current quarter shows that accounts payable have swelled by $80.8 million since the end of the last sequential quarter, bringing its total payables balance to $637.7 million. Since the company's inventory account only increased by roughly $2 million to $290 million over the last 13 weeks, we know that the increase in accounts payable wasn't due to a sudden jump in product inventory.

In simpler terms, it appears that Chewy significantly stretched out its payments to vendors this quarter, allowing it to just barely record positive operating cash flow. Management cited $31.1 million in cash generated by the company's "favorable working capital cycle" as a primary factor behind the positive performance. This figure represents the $80.8 million in higher payables reduced by other balance sheet items that affect working capital, like changes in inventory, accounts receivables, prepaid expenses, etc.

"Cycle" is a very appropriate word to use here. Large swings in cash flow due to the timing of payments to vendors (and/or monies collected from customers) have a way of cycling back to equilibrium in future quarters. This quarter's cash performance doesn't mean that Chewy has suddenly leaped into cash-flow-positive territory. Rather, investors should watch this metric over the next few quarters to confirm the direction of the trend.