For the last half-century, the U.S. dollar has reigned supreme in global trade. The deal that President Richard Nixon made with Saudi Arabia to provide that nation with military aid in exchange for all OPEC contracts being denominated in dollars led to the rise of the petrodollar, and further cemented the post-World War II Bretton Woods arrangement under which the dollar served as the global reserve currency. As a result, most international commodities contracts were denominated in dollars.

In March 2018, China made a move to alter the established order: It launched the petroyuan with publicly traded, yuan-denominated oil contracts. Political risk diversification and international unease with U.S. foreign policy have helped the petroyuan gain momentum, with Russia and the EU climbing aboard. In addition, the U.S./China trade war has reverberated across the globe, and China's economic might and unquenchable thirst for imported oil give it massive trade leverage in Asia, which likewise helps the petroyuan. 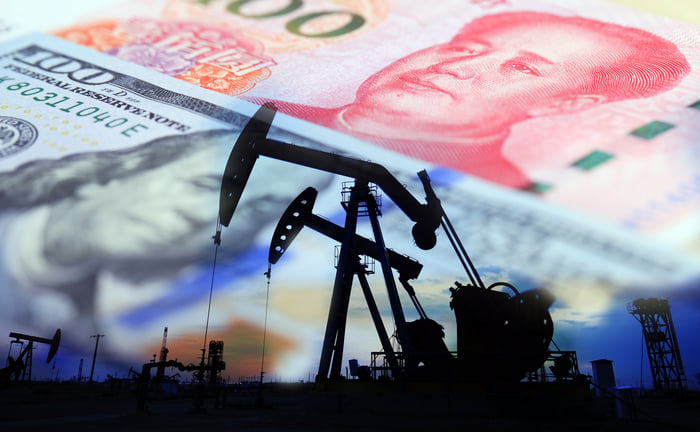 American oil companies with established footholds in Chinese business, such as ExxonMobil (NYSE:XOM) and Chevron (NYSE:CVX), should find the prospect of handling a greater volume of business in the yuan relatively easy to manage. Others, such as Hess (NYSE:HES) might find it more difficult, unless they pursue additional China-related business. To understand precisely why these companies face different impacts from the rise of the petroyuan requires a dive into economic history.

Getting the short end of the forex stick

Billionaire investor George Soros is vilified in Asia for his 1998 foreign-exchange attacks on the Malaysian ringgit, Thai baht, and South Korean won. This is because the majority of international commodities contracts were (and until recently, have continued to be) denominated in dollars, which requires every country conducting international trade to keep dollar reserves on hand in a ratio to its own domestic currency for internal use. The foreign exchange markets operate 24/7, and currencies' relative values reflect both the market's confidence in various countries' governments, and their longer-term ability to pay for essential goods and services.

When Soros shorted those currencies on an institutional scale, and spread negative sentiments that caused others to join him, confidence in the ringgit, baht and won plummeted, meaning that the dollar reserves they held to pay for imports of food, fuel and water, and repay other liabilities, would quickly be exhausted. These nations would have been potentially forced into the difficult position of choosing which of their populations' critical needs to spend those currency reserves on: Food or fuel? Water or medical supplies? This was one feature of the recent economic plunge in Venezuela, and that situation still has yet to be fully resolved.

But what if there was an alternative? What if other commodities, products, and services were readily purchasable in renminbi (the other name for the yuan)? If they'd had that option, it could have given those nations some breathing room amid their economic storms, and offered them the possibility of more leverage in their negotiations for international trade contracts.

In March 2018, UBS published a white paper on the petroyuan that gave a broad perspective on how the proliferation of the renminbi (RMB) will impact trade. Oil-producing nations that export to China will amass stockpiles of yuan, and thus, the analysts assert, will be more likely to use that currency to buy other Chinese goods. As the paper notes: "This will have two principal effects: increased demand for RMB assets and a switch out of the USD for trading purposes."

The white paper anticipates even greater use of RMB in the future for other types of trade from nations that export oil to China -- a trend that has already commenced in significant ways.

For instance, Russia, which has overtaken Saudi Arabia as China's largest oil supplier, has extended its international trade with China in yuan. With over $100 billion in annual Chinese-Russian transactions, a July 2019 announcement declared that all future settlements between the two nations will be conducted without using the medium of the dollar. Their move to take that quantity of business off the SWIFT network, which last year facilitated about half of all large international fund transfers, is not insignificant, and it's likely to lead to more use of the yuan by nations seeking to avoid U.S. sanctions due to dealings with Iran and North Korea, for example, or to conduct other non-dollar-denominated business -- because the outlet for such trade now exists.

China's trade influence is pervasive throughout Asia, from Japan to South Korea, and also with oil-rich nations like Indonesia and Malaysia. All do reciprocal trade with China, and inevitably will do so to an increasing extent in yuan.

Pacific Rim nations doing oil-related business with U.S. companies will increasingly be tempted to request yuan for settlements due to other trade activity with China. If Chinese, Russian and EU competitors are willing to do business with these nations in yuan, which U.S. oil companies will be able to maintain their presence in the region?

When you want yuan

With chemical and downstream operations directly in China, ExxonMobil will likely be able to obtain all the yuan in might require to pay the bills on upstream operations in Southeast Asian countries like Indonesia without having to resort to the forex markets. ExxonMobil has long-term LNG supply contracts with Sinopec and PetroChina. It also operates two lubricant plants and the Shanghai Technology Center for the marketing of petroleum-derived chemical products.

With active operations in China, Indonesia, Cambodia, Malaysia, The Philippines, South Korea, Thailand, and Singapore, Chevron would also seem to be in a relatively healthy position relative to its Pacific Rim business platforms should the petroyuan become the "coin of the realm" for those nations. Chevron has Chinese subsidiaries for oil and natural gas exploration and production in Sichuan and in the South China Sea, as well as a refinery joint venture with Phillips in Jinshanwei. Chevron's Caltex brand of gasoline and lubricants is also popular in China.

China is both Indonesia's and Cambodia's largest trading partner. Malaysia is China's third-largest Asian trading partner after Japan and South Korea. Indonesia, Malaysia, and Cambodia are all members of ASEAN. Given China's May 2019 announcement that is has targeted Southeast Asian to be its main region for investment reallocation, it's reasonable to assume that yuan proliferation in those countries will continue. While the dollar will certainly continue to be accepted for their international transactions, the reduced cost to these nations to use the yuan due to its increased liquidity and utility will potentially reduce the dollar's status to something more akin to the euro, the yen or the pound in this regard, with the commensurate forex costs becoming part of the equation for business transactions. The IMF cites this as a likely outcome based on historical precedent, especially in the event that the ASEAN countries eventually abandon their dollar currency pegs. The greater the ubiquity of renminbi among ASEAN members, the presumed greater demand there will be for renminbi-denominated international contracts.

It's for this reason that companies without a China presence could face higher costs. For example, Hess has operations in Thailand and Malaysia, including a joint development with Malaysia's national oil company, Petronas. If Petronas starts requesting payment in yuan, Hess would have few means of obtaining them outside of the forex markets.

While this shift will not happen overnight, the pace of change in world affairs seems only to grow more rapid. With the trade war between the U.S. and China still unresolved and likely to linger, and with China's economic engine decelerating a bit, but still strong, the growth of yuan-denominated transactions internationally is set to continue. And with China's unslakable thirst for imported oil underpinning its petroyuan ambitions, those U.S. energy companies not in the game will pay the price.