As United Natural Foods (NYSE:UNFI) prepares to issue its fiscal first-quarter 2020 earnings on Wednesday morning, it's clear that shareholders have never really warmed to its $2.8 billion acquisition of wholesale and retail grocer SUPERVALU in October 2018. On July 16, 2018, the day the deal was announced, shares of United Natural Foods (UNFI) slumped 16%. They've never regained ground, and in fact, they've shed 73% of their value from the announcement to date.

Investors' premonition that the merger would create operational challenges proved correct. By the second quarter of fiscal 2019, adjusted EBITDA of the combined company fell below expectations. UNFI recorded a $371 million charge against SUPERVALU's goodwill -- though it later revised the impact somewhat via $78 million in goodwill benefit adjustments in the following third and fourth quarters. 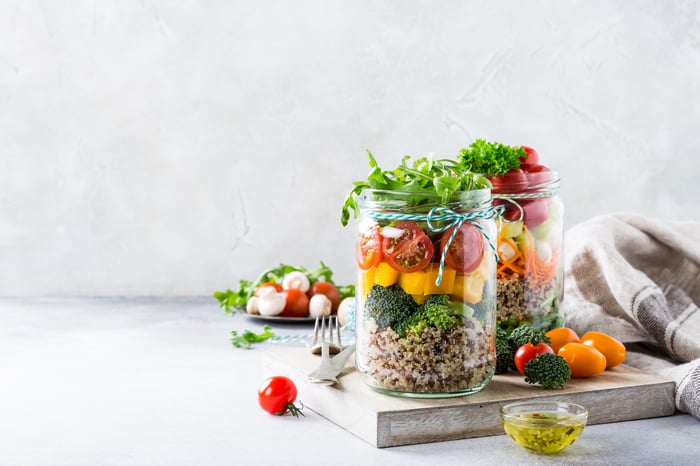 Acquiring SUPERVALU was transformative (the deal added $14 billion in annual sales to UNFI's books), but transaction financing swelled the company's debt. Previously encumbered by just $360 million in long-term borrowings, UNFI held long-term debt of about $4 billion after the purchase closed. The company has since reduced that total to a still-hefty $2.8 billion as of its last earnings report on Oct 1.

The interest on the borrowing, and on SUPERVALU's existing leases, is a formidable obligation. Interest expense of $59 million last quarter was equal to 89% of UNFI's total operating income of $66 million.

A clearer picture of the organization's challenges meeting its debt service is shown by its "times interest earned," or TIE, ratio. This ratio measures the number of times a company's annual EBIT (earnings before interest and taxes) covers its annual interest expense. As you can see, UNFI's TIE has fallen from an extremely healthy pre-acquisition reading of roughly 16 into negative territory as of last quarter: 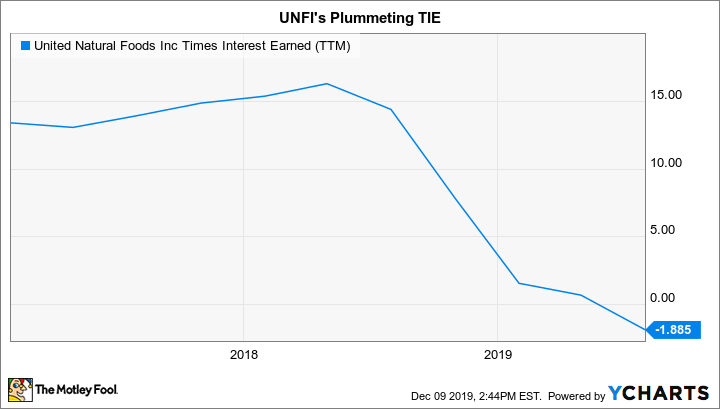 Compounding concerns over leverage, UNFI's near-term bottom line looks paltry, as merger benefits will only be realized gradually over the next several quarters. The company doesn't provide quarterly guidance, but heading into Wednesday's report, its annual financial outlook gives investors a sense of just how anemic current profits are. For the full fiscal 2020 year, UNFI anticipates squeezing just $19 million to $48 million in net income from sales that are expected to land near $24 billion.

Widespread pessimism often attracts the attention of opportunists, however. Heavy indebtedness and threadbare margins may present an entry point for risk-tolerant, value-seeking investors: The stock is trading for just seven times forward earnings. Its price-to-book value of just 0.3 also speaks to relative undervaluation. A bit of business stabilization exhibited in quarterly earnings would likely pull in such buyers.

What will it take for Wednesday's results to elicit this type of endorsement? An uptick in gross margin will help, as lower-margin SUPERVALU sales have crimped UNFI's gross margin to 13%, from roughly 16% pre-merger. Healthier gross profitability would be welcomed since it signals higher future operating cash flows, and rising operating cash is the best metric to ease concerns about the company's debt service.

UNFI's plans to exit the retail businesses acquired in the SUPERVALU transaction could also positively catalyze shares. In last quarter's earnings conference call, management confirmed that it expects to sell SUPERVALU's 81 Cub Foods stores and 43 Shoppers Food & Pharmacy grocery stores in calendar 2020. Last week, the company announced that it's entered into agreements to sell 13 of its Shoppers stores by February 2020. Details on planned dispositions, from expected proceeds (which can be used to pay down debt) to estimated cost savings from the exits, could help support the company's share price on Wednesday and into the near future.

Finally, whether in this quarter or the following quarters in fiscal 2020, progress on the integration of SUPERVALU's and United Natural Foods' distribution centers will demonstrate that the company can begin to meaningfully improve profitability. Distribution integration issues have been the primary culprit for lower-than-expected EBITDA since the merger; once these are fully resolved, it should clear a path to promised synergies between the two businesses.

At any rate, between current shareholders' worry, and the potential for value seekers to pile in if the company reveals unexpectedly positive earnings, Wednesday's report could spark a volatile reaction in either direction. I'll be most surprised if UNFI's shares show little change after tomorrow's filing.