Ahhhhh. Now this is more like it. The market was robust and healthy on Thursday, in contrast to the numerous sluggish days of recent times. For the most part, top stocks rose nicely, making their investors happier.

As ever, though, there were some glum and gloomy faces in the crowd. Two stocks in particular took a bit of a wallop; let's determine why as they rest and recuperate for more action tomorrow. 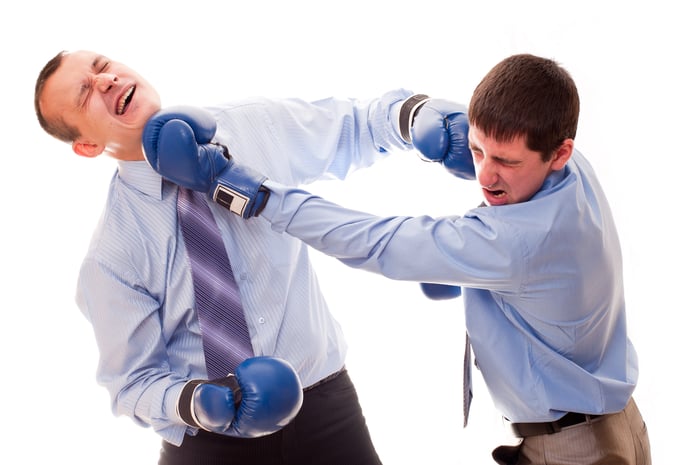 Yoga devotees are well familiar with the downward dog position. The athleisurewear specialist lululemon athletica (NASDAQ:LULU), which outfits many who follow the discipline, was downward stock on Thursday -- the share price slipped by almost 4%.

That's to be expected from companies that whiff on earnings. Lululemon reported its Q3 of fiscal 2019 results before the opening bell, revealing that it booked $916 million in net revenue. This represented year-over-year growth of 23%, and was comfortably above the average analyst estimate of $899 million.

Same-store sales growth was 10% for the quarter.

Headline net profit came in 33% higher at just under $126 million, or $0.97 per share. On a non-GAAP (adjusted) per-share basis, the company netted $0.75. That, however, was significantly below the collective prognosticator projection of $0.93.

Lululemon attributed its growth to big improvements in sales of the menswear category, as well as bras and outerwear.

The difference between analyst profitability expectation and the company's actual performance is stark. But we should keep in mind that with torrid growth rates behind it, Lululemon can be considered a victim of high expectations.

To me, 10% same-store sales growth is impressive for a company that's no longer in the early, fashion-trend-of-the-moment stage of its development. I also like that Lululemon continues to hunt for good growth opportunities, opening stores in promising smaller-city markets like China's Hangzhou or Oslo in Norway.

Lululemon stock is expensive on a forward-looking basis, with a current five-year PEG ratio of 2.4. But I think the market might be underestimating its still-considerable growth potential. As such, I'd very much consider buying the shares on this latest price dip.

It's rarely a happy situation when a big, well-financed company muscles into a business segment you consider to be yours.

This is the case with Hertz Global Holdings (OTC:HTZG.Q), following news that Lyft (NASDAQ:LYFT) is entering the rental car arena. Hertz stock fell by almost 5% in the wake of this; peer Avis Budget Group (NASDAQ:CAR) also dropped, by a slightly lower percentage.

Lyft's new service is called, yes, Lyft Rentals. Customers can hire vehicles from the company for up to two weeks, with no mileage limits or additional charges for refueling. So far the program is available in only three California cities: San Francisco; Oakland, California; and Los Angeles. Lyft is offering $20 in rideshare credit to and from the lots in those locations.

As with the company's anchor ridesharing service, customers can book rentals through the Lyft app.

Is this a blow that will send Hertz and Avis down to the canvas? I'm not so sure. Those two companies have built their respective businesses over the course of decades. They've also expended billions of dollars in capital to build out lots, staff offices, and expand vehicle fleets.

In other words, renting cars is a long-stew business that requires lots of time and gobs of cash. Meanwhile, Lyft is famously deep in the red and unlikely to be profitable or show positive free cash flow anytime soon.

So I wouldn't consider the company to be a threat to Hertz, Avis, or even many of the smaller agencies that dot the rental landscape.

Whether this makes Hertz and/or Avis a good investment is another question, though. On the one hand, the growing number of mobility options available to consumers -- particularly in cities -- limits organic growth potential.

On the other, both stocks are very cheap on that trusty old five-year PEG basis, especially Hertz at a wafer-thin 0.14. Considering that Hertz is a proven moneymaker and a wily veteran in this sector, its shares might just be worthy of a buy at this weakened level.