After President Trump tweeted that a trade deal with China was close, the stock market took off on Thursday. U.S. negotiators are reportedly offering to cut existing tariffs and cancel new tariffs set to go into effect on Sunday, according to The Wall Street Journal. The Dow Jones Industrial Average was up 0.42% at 12:40 p.m. EST.

Leading the Dow was Cisco Systems (NASDAQ:CSCO), which announced that it had begun selling networking chips directly to large internet customers. Meanwhile, Apple (NASDAQ:AAPL) was a laggard following some concerning iPhone sales data out of China.

Networking hardware giant Cisco is making a significant change to its business model. Instead of reserving its networking chips for its own hardware, like it has in the past, the company has begun supplying chips directly to some major technology companies.

Chips based on Cisco's new Silicon One architecture are already being used by Microsoft and Facebook, and the company is now offering the chips to all of its customers. Shares of Cisco were up 2.4% on the news.

Large cloud computing companies have been designing their own custom hardware, a challenge to Cisco's traditional model of selling proprietary networking gear. By selling chips that can power switches and routers directly, Cisco is going after business from large internet companies that it otherwise would be unable to win.

"From today -- and this is something that some of you never thought we'd do -- some of our customers will buy our silicon and build their own products if that's what they choose to do," said Cisco CEO Chuck Robbins at an event on Wednesday. This move will pay dividends for Cisco if it can capture new sales from the tech giants without hurting its core business of selling proprietary hardware.

Cisco is currently facing a downturn in demand as large customers delay orders due to economic uncertainty. The company expects sales to decline by 3% to 5% in its fiscal second quarter. By opening up a new revenue stream by selling its chips directly, Cisco could help offset weakening demand for its core switching and routing products.

While Apple is reportedly seeing solid demand for its iPhone 11 family in the U.S., China is a different story. Apple has been making progress in China recently, with total sales in the country down just a few percent in the fiscal fourth quarter. China sales were down 16% in fiscal 2019 thanks to sagging smartphone market share, so the fourth-quarter results were a breath of fresh air. 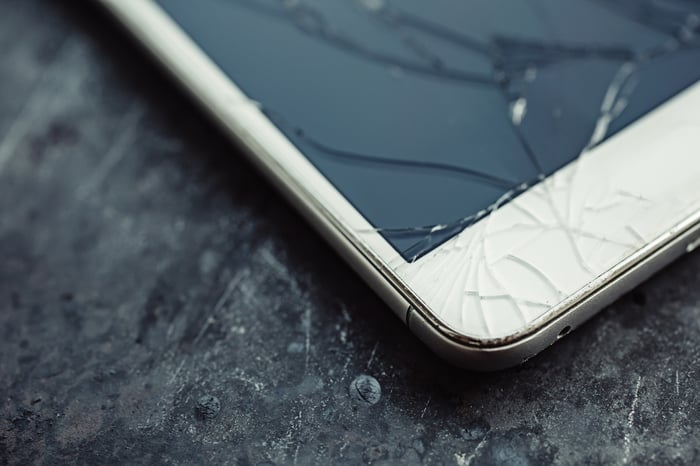 The improvements are apparently not sticking, though. According to Credit Suisse, Apple saw iPhone sales in China plummet 35.4% year over year in November, while the regional smartphone market expanded by 0.2%. This follows a 10.3% year-over-year decline for Apple in October. Not exactly the best way to kick off the new fiscal year.

Shares of Apple were down 0.6% on the news, even as the broader market surged.

In the U.S., strong demand for the iPhone could be upended if tariffs set to go into effect on Dec. 15 aren't postponed. If Apple tries to pass off higher costs on to customers, it could lead to a significant decline in iPhone sales if customers balk at higher prices.

Apple can certainly cobble together a solid holiday season, especially if the tariffs don't go into effect. But weak sales in China are muddling the picture.